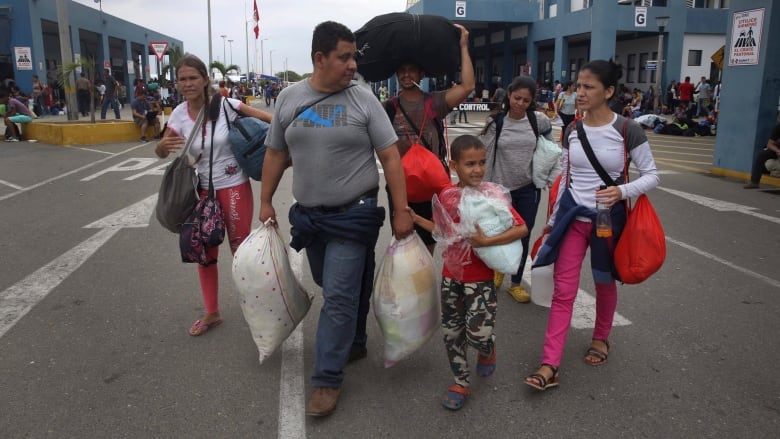 Venezuelan migrants arrive at immigration control in Tumbes, Peru, on June 14. Over four million have fled Venezuela amid the political and economic turmoil in the country in the past three years. (Martin Mejia/The Associated Press)

The Venezuela migration crisis has now entered a new stage in which many of those fleeing their country’s devastating economic downturn and political turmoil are increasingly unlikely to return, a United Nations special envoy said.

Eduardo Stein told The Associated Press on Wednesday that the exodus of over 4.6 million Venezuelans has now permanently changed Latin America and that even if there were an immediate resolution, many Venezuelan would likely stay abroad.

“A good amount of those who left are not going to want to return,” he said. “They will have laid down roots in the countries where they arrived.”

As a result, he said, “The entire region won’t be the same.”

The UN refugee agency made an appeal to the international community this week urging foreign nations and institutions to donate $1.35 billion US to help Latin American and Caribbean nations respond to the massive exodus in 2020.

According to its estimates, 6.5 million Venezuelan could be living outside the South American nation by the end of next year if current trends continue, surpassing even the number of Syrians fleeing that country’s bloody civil conflict.

“The humanitarian needs are very similar,” Stein said in reference to the comparisons now being made with Syria. “But the cause of each exodus is very different.”

Neighboring countries in need of funding

Venezuelans are fleeing six-digit hyperinflation that has rendered many salaries worthless and made it difficult or impossible to afford basics like food and medicine coupled with widespread human rights violations and a political standoff.

Neighbouring Colombia has been the biggest receptor of Venezuelan migrants and refugees, with over 1.5 million now living in its territory. Colombia’s numbers are expected to continue swelling as other nations begin enforcing entry requirements.

The crisis has garnered far less attention and international aid than other international mass migrations, with European Union foreign policy chief Federica Mogherini recently calling it the “most underfunded refugee crisis in the world.”

The UN has previously called on donors to contribute $315 million to Colombia as it responds to the health, education and other needs of thousands of Venezuela who continue to arrive daily — though as of August, it had received just $96 million.

According to Colombian officials, that equates to about $68 per Venezuelan migrant, far below the more than $500 provided for each Syrian refugee.

“The receiving nations have exhausted their budgets,” Stein said. “Their institutional capacity has been totally surpassed.” 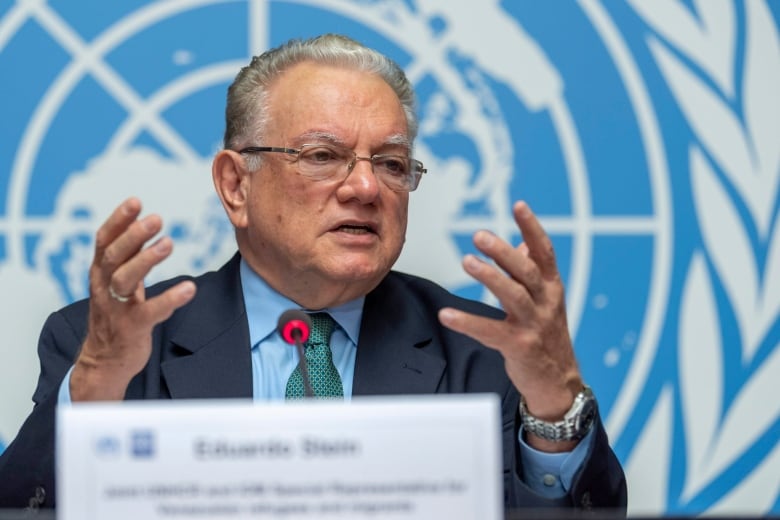 Eduardo Stein, UN Refugee Agency and International Organization for Migration Special Representative for Venezuelan refugees and migrants, says Latin American countries have received just a fraction of the aid they need to absorb the influx of newcomers. (Martial Trezzini/Keystone via AP)

The Guatemalan diplomat said there is a perception among some international leaders that the Venezuela exodus is an issue Latin America should resolve on its own and that only has geopolitical implications for the United States and Canada.

In response, Stein said he reminds European countries of their involvement in pushing for a peaceful resolution to the wave of unrest that shook Central America in the 1970s and ’80s.

The new aid request is aimed not just at responding to immediate humanitarian needs but also in helping Venezuelans integrate into their adopted nations over the longer-term and assisting local populations stressed by their arrival.

As neighboring countries deal with a “staggering” number of refugees from Venezuela, the worsening situation becomes the second-biggest migrant crisis in the world after Syria. The UN is renewing its call for international help, and we discuss the unique role Canada could play in a possible solution. 19:09

Stein praised receptor nations for their generosity but also warned that many Venezuelan migrants are now encountering hostility.

UN refugee agency interviews with Venezuelan migrants across Latin America show 46.9 percent have felt discrimination, up from 36.9 percent earlier this year. In Colombia, 51.7 percent reported discrimination, while in Peru about 65 percent said they had felt largely nationality-based rejection.

“They’ve arrived in such large numbers that now rejection is springing up,” he said.