Democrats Are Mobilizing Their Plan to Lose the Impeachment Trial

The strategy to beat Mitch McConnell starts with letting him win. 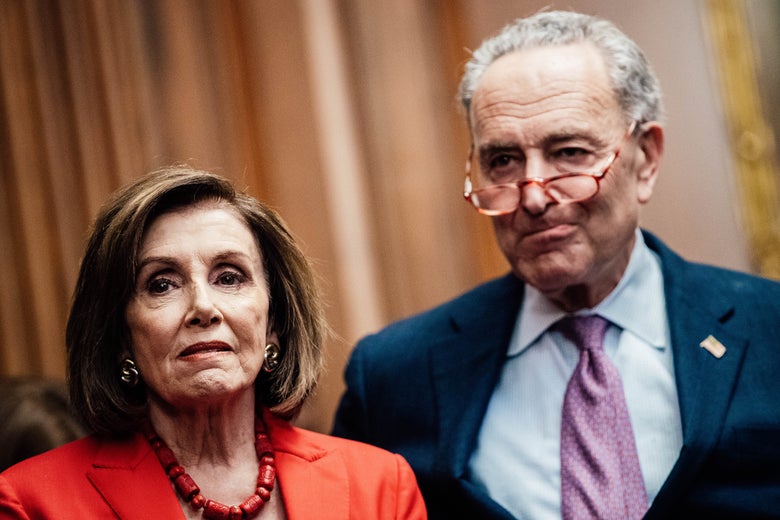 On Tuesday, Senate Republicans moved closer to handing President Donald Trump an impeachment trial without witnesses, evidence, or documents. Such a trial will likely result in the acquittal or the dismissal of charges that the president desperately craves. After passing charges of abuse of power and obstruction of Congress, then holding them back from the Senate for three weeks in the name of preventing such a sham trial, Democrats now themselves appear ready to go along with the Republican plan.

First, Senate Majority Leader Mitch McConnell told reporters on Tuesday that he has the votes he needs to proceed to his desired Senate trial format, in which any vote on witnesses would be delayed until after the cases had been presented. As Minority Leader Chuck Schumer has previously noted, this is a simple ruse. McConnell has already promised to follow up the initial argument phase of the trial by holding a vote to end it before any new witnesses or documents can be brought to light through subpoenas.

McConnell, that is, has pledged to prevent the public from hearing testimony under oath from crucial witnesses like former national security adviser John Bolton, who on Monday offered to testify and who has said he has information directly relevant to the charges that the president blocked security aid to Ukraine to pressure that nation’s leadership to announce an investigation of Joe Biden.

As Schumer further noted in a floor speech on Tuesday, Bill Clinton’s impeachment trial had witness depositions in the Senate, and Andrew Johnson’s impeachment trial had 41 witnesses. “A trial isn’t a trial without evidence. A trial without all the facts is a farce,” Schumer argued. “If the president is ultimately acquitted at the end of a sham trial, his acquittal will be meaningless.” Speaker of the House Nancy Pelosi had promised to withhold the articles of impeachment until Senate leadership offered a clearer picture of what that trial would look like, as a strategy to try to prevent Republicans from rigging the proceedings to protect Trump.

And now, having established the central importance of having a real trial with witnesses, the Democrats are apparently ready to give up and let McConnell run things his way. “I think the speaker should send the articles regardless [of whether there will be witnesses],” Sen. Chris Murphy told reporters on Tuesday. “I think the time has passed. She should send the articles over.”

On Tuesday afternoon, Schumer all but confirmed that this phase of impeachment had ended. “The speaker has said all along that she wanted to see the arena in which she was playing when it came to a trial so that she could appoint impeachment managers,” Schumer said. “Now it’s becoming clear that Mitch McConnell wants to do everything he can to avoid a fair trial, so she has some idea of what’s happened.”

The New York Democrat further argued that Pelosi’s temporary delay tactics had “helped our case” even if it was time to move on.

McConnell, meanwhile, was making it clear exactly how that trial would go, telling reporters he had the votes to block witnesses in the first phase, with potential swing Sens. Susan Collins, Lisa Murkowski, and Mitt Romney confirming that they supported his plan.

Faced with McConnell’s disciplined strategy to protect Trump, it seems, the Democrats have decided to give up on the Senate and hope they can win in the court of public opinion. “We have always known that leader McConnell would not be for a fair trial,” Schumer said during the press conference. “He said that from the beginning.”

Schumer now says that forcing votes on witnesses at the end of an initial trial presentation might still work to pressure vulnerable senators to come along, after having argued for days that McConnell’s plan was a “poorly disguised trap.”

“If we leave the question of witnesses and documents until after all the presentations are complete, leader McConnell will argue that the Senate has heard enough, and we shouldn’t prolong the trial any longer,” Schumer said last week. “At that point, you can be sure he’ll label anyone who wants to subpoena evidence as a partisan who wants to drag the whole affair out.”

Now Democrats appear to be barreling full steam ahead into this very trap and hoping that pressure that hasn’t worked thus far will work at the end of opening presentations.

“Many of [McConnell’s] colleagues are very, very worried about going home and saying they are not for witnesses and documents,” Schumer said. “They’re afraid to say yes [to witnesses], because they know Donald Trump will be furious at them. They’re afraid to say no because they know their voters, their constituents will be furious at them. They’re stuck.”

For the time being, though, they’ve sided with McConnell. There seems to be little reason to believe that will change in the next couple of weeks even if the polling shows the public wants witnesses. A FiveThirtyEight/Ipsos impeachment tracking poll released last week showed that 57 percent of respondents supported witnesses, confirming previous polls.

In the same poll, though, 52 percent of respondents opposed Democrats seeking to delay the trial. So the decision to move ahead under terms dictated by McConnell may have seemed necessary, from a poll-watching standpoint. Still, it’s impossible not to see it as a capitulation to a defeat in the Senate—one which Trump will tout as a complete exoneration.

And while the last phase of the impeachment fight was about convincing the public that a trial matters, and that it ought to include witnesses, the next phase will be about trying to convince the public to hold Republicans accountable where the Democrats could not. Democrats think they can make the case that potentially vulnerable senators like Collins, Colorado’s Cory Gardner, North Carolina’s Thom Tillis, and Arizona’s Martha McSally have shirked their duty.

A Senate Democratic aide pointed to fresh surveys from a Democratic pollster that indicated that these four at least would be viewed unfavorably in their home states if they blocked witnesses and documents. But that polling took place in a context where Democrats were actively fighting for impeachment, rather than yielding to McConnell themselves.

On Monday we got the first taste of what Democratic efforts to target these senators might look like with the release of a super PAC ad in Arizona going after McSally. The campaign portrayed McSally wearing a golden arches fast food franchise branded uniform labeled “McSally’s.” It accused her of flip-flopping (like a burger!) on Deferred Action for Childhood Arrivals and of being dismissive of the Ukraine scandal.

The ad leaned heavily into soft drink imagery, showing a cartoon cutout of a fast-food uniformed McSally selling “souvenir cups” featuring a previous quote of the senator’s calling the Ukraine investigation a “kamikaze mission” for Democrats. The idea is that the voters should keep holding that against her, even after the Democrats let the impeachment trial crash and burn.

Update, Jan. 8, 2020, at 12:10 p.m.: On Tuesday evening, Pelosi sent out a “Dear Colleague” letter to fellow members of the House indicating that before transmitting articles of impeachment to the Senate, she wanted to see the specific resolution McConnell was proposing. “It is important that he immediately publish this resolution, so that, as I have said before, we can see the arena in which we will be participating, appoint managers and transmit the articles to the Senate,” Pelosi said. McConnell has said consistently that he’d like to use the 1999 Bill Clinton impeachment resolution as a template and said on Tuesday, “We’ll be glad to show [the resolution] to you when we unveil it.”