Poll: Most Britons back a No Deal exit over delaying or cancelling Brexit 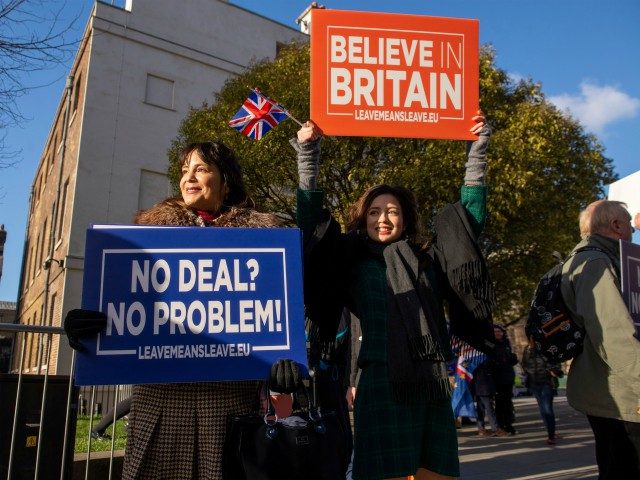 A plurality of Britons would back leaving the EU on time, even without a deal, over delaying or canceling Brexit.

The poll by Opinium published on Saturday revealed that a no-deal Brexit had a 17-point lead over the next most popular option, canceling Brexit.

The poll of 2,003 adults in the UK conducted between the 8th and 9th of August found that when asked what Prime Minister Boris Johnson should do if he is unable to make changes to the Withdrawal Agreement — enabling it to pass the House of Commons — 46 per cent of respondents said he should “go ahead with Brexit on October 31st even if it means leaving with ‘no deal’”.

Just 12 percent back Mr. Johnson delaying Brexit for a third time “until we can negotiate a deal that can pass the House of Commons”, and less than one-third, 29 percent, said he should “cancel Brexit and decide to remain in the European Union after all.”

Prime Minister Johnson has pledged to take the UK out of the EU on October 31st in any circumstances, telling the Civil Service to make preparing for a no-deal “top priority” this week, in the wake of the prime minister establishing a no-deal “War Cabinet”.

The poll also revealed that Britons are becoming increasingly convinced that the UK will leave the EU on the planned exit date, with 61 percent believing that Mr. Johnson will make good on his promise, up from 53 percent two weeks ago.

Adam Drummond, head of policy at Opinium, said: “Johnson’s strategy of uniting the Leave vote appears to still be paying off and the message discipline of ‘leave by the 31st do or die’ has had some effect with an increasing number of voters believing the UK will leave by that date.”

Johnson is expected to return to the House of Commons in September after the summer recess to face the Remainer-dominated parliament and likely calls for a vote of no-confidence in the government in order to thwart Brexit. Reports that Mr. Johnson would ignore calls for him to step down appear to have the backing of the public.

The Opinium poll also revealed that 40 percent of respondents would want the prime minister to refuse to resign, and for him then call a snap General Election after October 31st to ensure the UK leaves the EU by that date — even in a clean break. Just 29 percent said he should step down so another government could be formed to stop a no-deal Brexit.

Lord Jonathan Sumpton, a former Supreme Court Judge, said last week that Prime Minister Johnson was legally entitled to ignore a vote of no confidence and call an election even after a no-deal Brexit.