It seems the White House’s “maximum pressure” campaign is now in overdrive following John Bolton’s announced carrier strike group and bomber deployment to the Persian Gulf region based on “troubling and escalatory” threats from Iran.

On Tuesday Secretary of State Mike Pompeo unexpectedly cancelled a meeting in Berlin with German Chancellor Angela Merkel and Foreign Minister Maas in order to make an urgent trip to Iraq, where he landed in Baghdad hours later due to reports that Iran was “escalating their activity” against US troops and assets in the region.

“I wanted to go to Baghdad to speak with the leadership there, to assure them that we stood ready to continue to ensure that Iraq was a sovereign, independent nation, and that the United States would continue to help build out partners in the region — the Jordanians, the Saudis, the Emiratis, all of the Gulf states — who want to see a free, independent, sovereign Iraq,” Pompeo said as he flew to Baghdad. 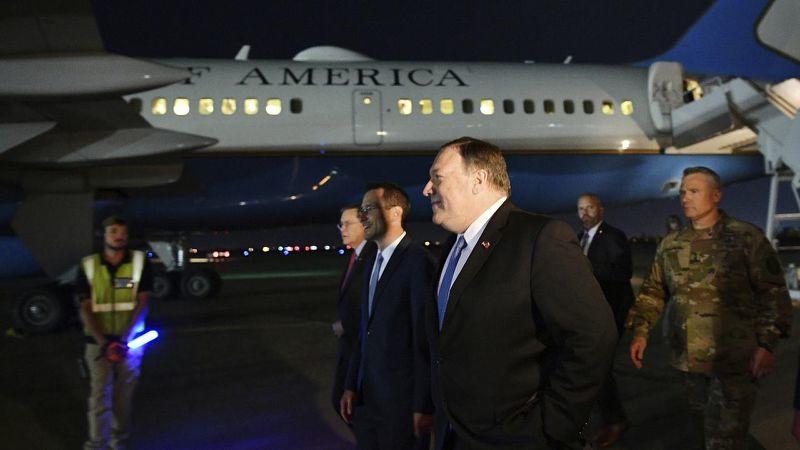 When pressed on precise nature of the Iran threat which warranted the last minute canceling his German engagements, he responded that he couldn’t go into details. But clearly he was there to press Iraqi leaders on ensuring the protection of American troops, especially given Baghdad’s closeness to Iran and pro-Shia militias which cooperate closely with Iraqi national forces.

However, Pompeo did note he would press the Iraqi government on pending business deals, including “big energy deals that can disconnect them from Iranian energy.” He reportedly met with Iraqi Prime Minister Adel Abdul Mahdi in Baghdad soon after touching down Tuesday night, and then separately with President Barham Salih.

He told reporters after the meeting (and without a hint of irony) that:

“We don’t want anyone interfering in their country.”

“The message that we’ve sent to the Iranians, I hope, puts us in a position where we can deter and the Iranians will think twice about attacking American interests,” Pompeo said, noting that the U.S. intelligence was “very specific” about “attacks that were imminent.”

Crucially, it was to be Secretary of State Pompeo’s first official trip to Berlin, where policy connected with Ukraine, Russia, China and Syria was to be discussed. The New York Times noted that the sudden cancellation was received as a snub of Merkel’s government in Germany.

Currently the Pentagon has confirmed deployment of four B-52 bombers to the Middle East CENTCOM region of operations as well as the USS Abraham Lincoln Nimitz-class carrier group in what Bolton previously described as “a clear and unmistakable message to the Iranian regime”.

Iran’s leaders dismissed Bolton’s words and western media hyping the ramping up of American readiness in the region as mere “psychological warfare” meant to scare and intimidate Tehran, noting further that US was using a pre-scheduled routine deployment as a mere pretext for its heightened pressure campaign.