Putin Is Trolling the United States in the Persian Gulf

In the wake of the drone attacks on Saudi Arabia, the Russian president has positioned himself as a peacemaker. But continued conflict is his friend. 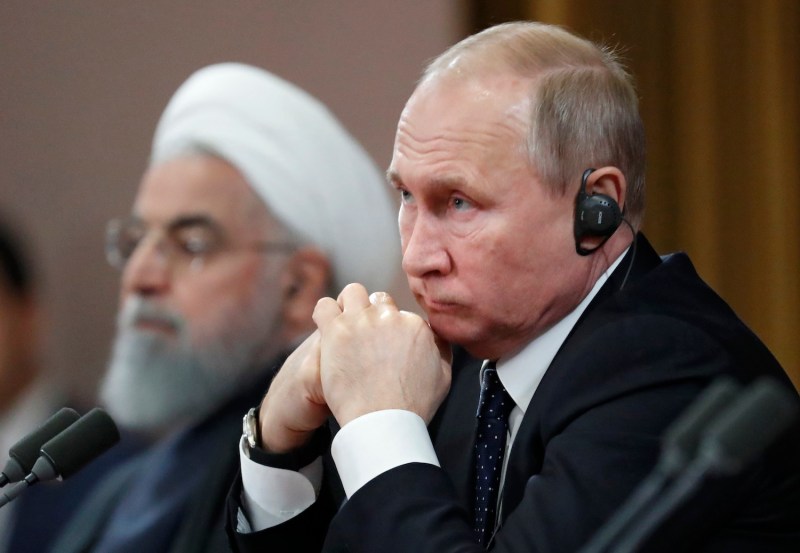 Think what you will about Russian President Vladimir Putin, but the man does have a wry sense of humor. Trolling has become one of his trademarks. If Saudi Arabia wants to protect itself, he hinted on Sept. 16, it should make a wise decision and follow Iran and Turkey, who bought Russian air-defense systems. Russia’s S-300 and S-400, he continued “are capable of defending any kind of infrastructure in Saudi Arabia from any kind of attack.” Flanked by Turkish President Recep Tayyip Erdogan and Iranian President Hassan Rouhani at a joint press conference in Ankara, Turkey, following a round of talks on Syria, Putin was poking at another friend of his, Saudi Crown Prince Mohammed bin Salman. “What should the Saudis buy,” Rouhani asked, laughing, “S-300 or S-400?” Putin’s retort was quick: “Let them choose.”

Russia’s response to the recent drone attack on Saudi Aramco oil facilities speaks volumes about its place in the Middle East. Had the crisis occurred several years ago, few would have cared what Moscow thought about Gulf affairs. But now, thanks to its military intervention in Syria, Russia is seen as a power broker. And if the Russian president had said that Russia is “locked and loaded” to respond to Iran’s apparent aggression in Saudi Arabia last weekend, as U.S. President Donald Trump did, he would probably mean it.

Except he won’t say it. Unlike the United States, Russia has no dog in the Iran-Saudi fight. The essence of its policy is to try to be on good terms with everyone: with the Iranians as well as with their foresworn enemies Saudi Arabia and Israel, with Turkey and the Kurds, with Bashar al-Assad’s regime in Damascus and its opponents. With a relatively modest military footprint, Russia is not in the business of playing the local sheriff, and it steers clear of other people’s quarrels. It seeks to make geopolitical and commercial gains without taking excessive risks. That stands in stark contrast with the United States, which, for all intents and purposes, still remains the hegemonic power in the Middle East and as such bears the cost of maintaining order.

Beyond that, troubles in the Gulf benefit Russian interests. The rise of oil prices is good news for the Kremlin. A $1 increase is estimated to bring in an extra $7.5 million in revenue for Russia each day.

No wonder that the Moscow stock market rallied on Monday, with stocks in the state-owned Rosneft energy company up by 5 percent. At the same time, the Russian government is treading with caution. Energy Minister Alexander Novak phoned up his Saudi counterpart, Prince Abdulaziz bin Salman, and signaled that Russia won’t increase production to expand its share of the global market at Riyadh’s expense. The so-called OPEC+ Pact of November 2016, which was aimed at controlling output, is working, with Saudi Arabia and Russia remaining the principal stakeholders.

In past years, the relationship between Saudi Arabia and Russia has thrived. Mohammed bin Salman rubbed shoulders with Putin at the opening game of the 2018 FIFA World Cup. In October 2017, his father, King Salman, became the first Saudi monarch to come to Moscow, a decade after Putin’s official visit to Riyadh, another first. And on Sept.18, Putin had a phone call with the crown prince, confirming he will be coming again this fall. The Russian government used to look at the Gulf as a cauldron of radical Islam spilling its destructive influence in the restless North Caucasus. Nowadays, it is seen as a source of opportunities—whether because of its premium real estate in Dubai catering to well-heeled Russians or lucrative defense markets that can absorb Russian-made gear. Indeed, Putin was only half-joking in Ankara. After all, the Saudi-funded government in Egypt just signed a $2 billion contract to buy 50 of Russia’s MiG-35 fighter jets. Gulf money is already pouring into Russia’s coffers.

Meanwhile, the ongoing rapprochement between Moscow and Riyadh does not change the fact that Iran remains the Russian partner of choice. Although the two countries’ interests are sometimes misaligned, diplomatic, defense, and trading ties with Tehran are better than at any point in history. Together with the Europeans, Russia is a guarantor of the Iran nuclear deal, or whatever remains of it. Putin is now posing as a peacemaker in Yemen, too. In Ankara this week, he quoted a verse from the Quran: “And remember the favor of Allah upon you—when you were enemies and he brought your hearts together and you became, by his favor, brothers.” Both Rouhani and Erdogan nodded approvingly.

Moscow is also Tehran’s ally in Syria. The three-way summit in Ankara announced progress toward the establishment of a constitutional committee in the war-torn country. In other words, through this meeting, Putin and Rouhani pushed Erdogan one step closer to restoring ties with the Assad regime. Iranians made another important gain in getting Russia (as well as Turkey) to condemn Israeli airstrikes in Syria. Whatever differences the Russians and the Iranians may have on the ground—notably backing rival factions within the Assad regime— they have succeeded in papering over them for now.

Washington’s bellicose rhetoric about Iran is likely to bring Moscow and Tehran even closer. Dmitry Peskov, a Kremlin spokesman, and Sergei Lavrov, the Russian minister of foreign affairs, pushed back strongly against the U.S. line that Iran is to blame for the drone attacks against the oil and gas processing facilities at Khurais and Abqaiq. To be sure, if tensions get out of hand and the United States ends up starting a war against Iran, the Russians will stand on the sidelines. But given the Trump administration’s penchant to rattle sabers and then back away, Putin could well reap another opportunity to burnish his image as the Middle East’s rising star.