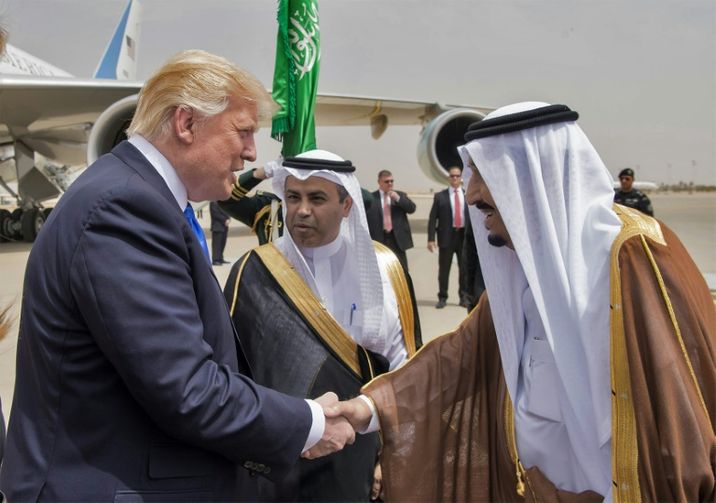 Saudi Arabia’s King Salman on Sunday criticized US President Donald Trump’s decision to transfer the US embassy in Israel to Jerusalem and pledged $150 million for the city’s Islamic holy sites.

Seventeen leaders from across the Arab world — minus Syrian President Bashar al-Assad — gathered in the eastern Saudi city of Dhahran for the summit, which this year comes as world powers face off over Syria and tensions rise between Riyadh and Tehran.

The meeting opened only 24 hours after a barrage of strikes launched by the United States, Britain and France hit targets they said were linked to chemical weapons development in Syria, which was suspended from the league seven years ago.

But King Salman avoided any mention of Syria in his address, as a seat marked “Syrian Arab Republic” sat empty in the hall.

Instead the king focused on rivalries with long-time foe Iran — only 160 kilometers (100 miles) across the Gulf from Dharan. 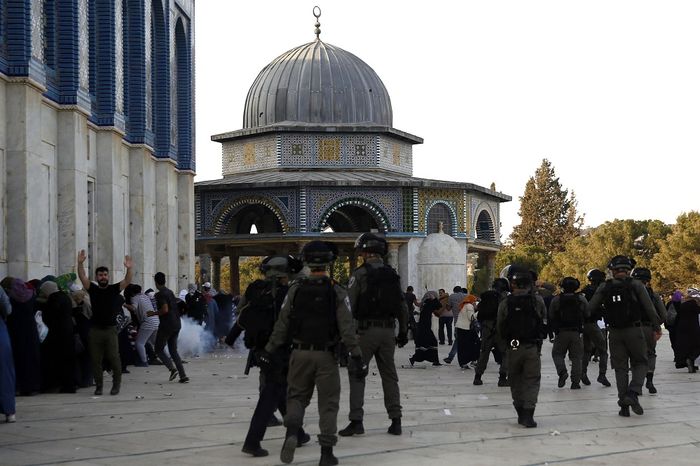 Israeli border police officers are seen next to the Dome of the Rock Mosque in the Al Aqsa Mosque compound in Jerusalem’s Old City, Thursday, July 27, 2017

“We renew our strong condemnation of Iran’s terrorist acts in the Arab region and reject its blatant interference in the affairs of Arab countries,” the king said.

And despite being a stalwart ally of the United States, the ruler also criticized US President Donald Trump controversial decision to transfer America’s embassy from Tel Aviv to Jerusalem.

“We reiterate our rejection of the US decision on Jerusalem,” Salman said. “East Jerusalem is an integral part of the Palestinian territories.”

In addition to the $150 million for Jerusalem’s Islamic holy sites, the king also coughed up $50 million for the United Nations Relief and Works Agency (UNRWA), according to an official Saudi Press Agency statement.

The international body is tasked with providing for the descendants of Palestinians who moved or were forced to flee during the creation of Israel in 1948 and the Six Day War in 1967.

In mid-March, UNRWA said it did not have the necessary funds to continue running until the summer after the US announced it was cutting its funding of the body.

Last month Salman intervened publicly after his son — and the kingdom’s de facto ruler — said he believes that “the Palestinians and the Israelis have the right to have their own land.” King Salman on Sunday announced a $150 million donation for the maintenance of Islamic heritage in East Jerusalem.

“Saudi Arabia announces a $150-million grant to support the administration of Jerusalem’s Islamic property,” the monarch said at the opening of the Arab League summit in the kingdom’s eastern city of Dhahran.

“I name this summit in Dhahran the Jerusalem Summit so that the entire world knows Palestine and its people remain at the heart of Arab concerns,” he said.

Saudi Arabia is also  pushing for a tough, unified stance against its regional arch-rival Iran at the annual gathering of the 22-member Arab League.

The two regional titans back opposing sides in a range of hotspots across the Middle East, including Lebanon and Syria and in Saudi Arabia’s southern neighbor Yemen.

Last month the Security Council issued a statement condemning Huthi missile attacks on Saudi, but did not name Iran. A general view of the Ithra center during the 28th summit of the Arab League in Dhahran in Eastern Province, Saudi Arabia on April 15, 2018

In February, Russia vetoed a Security Council resolution that would have expressed concern over Iran’s failure to block supplies of missiles to Yemen’s Huthi rebels.

The summit also comes with Saudi Arabia and Qatar locked in a months-long diplomatic standoff, with Riyadh accusing Doha of supporting Islamist extremists and being too close to Iran.

Tensions have eased slightly in recent months but Qatar still only sent its representative to the Arab League to the Dhahran summit.

Among the leaders in attendance was Sudan’s Omar al-Bashir, who walked the red carpet and was greeted by King Salman. Bashir is wanted by the International Criminal Court for five counts of crimes against humanity, three counts of genocide and two counts of war crimes.

Summits of the Arab League, established in 1945, rarely result in action. The last time the bloc made a concrete move was in 2011, when it suspended Syria’s membership over the Assad regime’s role in the war.

Syria’s war, the most complex of the region’s conflicts, is the main point of contention pitting Riyadh and its allies, who mainly back Sunni rebels, against regime backer Iran and its Lebanese ally Hezbollah.

Gulf Arab states have made massive donations to Syria but have not officially offered asylum to Syrians.