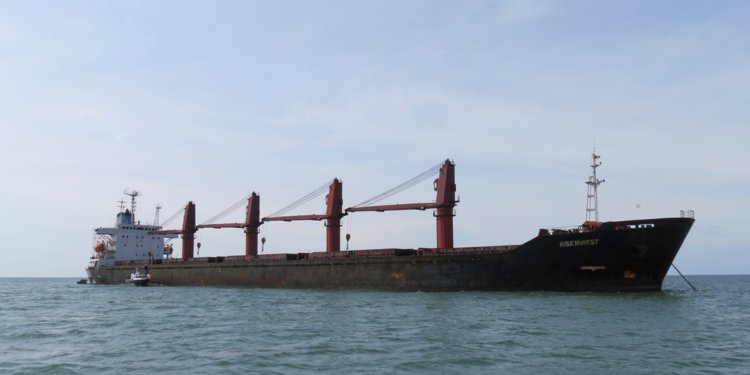 The US seized a North Korean ship and sailed it thousands of miles to check whether it has been used to violate international sanctions.

The US alleges that the “Wise Honest,” North Korea’s second-largest cargo ship, was making illicit shipments of coal and heavy machinery — in violation of US and UN sanctions on North Korea.

The Department of Justice announced Thursday that it had seized the 17,000-ton ship, the first time a North Korean ship has been commandeered over sanctions violations.

The announcement came after North Korea appeared to launch two short-range missiles in a test, adding further tensions to its relations with the US.

The Wise Honest arrived in the port of Pago Pago in the US territory of American Samoa on Saturday after a three-week journey, The Associated Press reported.

Read more: The US just announced a rare seizure of a North Korean ship carrying banned coal — here’s why the US took it and what could come next

Assistant Attorney General Demers called the “Wise Honest” a “sanctions-busting ship” and said the US would ensure that North Korea complies with the international sanctions.

“This sanctions-busting ship is now out of service,” Demers said on Thursday.

“North Korea, and the companies that help it evade US and UN sanctions, should know that we will use all tools at our disposal — including a civil forfeiture action such as this one, or criminal charges — to enforce the sanctions enacted by the U.S. and the global community.”

“We are deeply committed to the role the Justice Department plays in applying maximum pressure to the North Korean regime to cease its belligerence.”

Read more: A ‘one in a million’ satellite image captured the exact moment of North Korea’s latest missile launch

The UN Security Council has banned North Korea from exporting commodities like coal, lead, and iron, in a bid to prevent it from funding its nuclear and weapons programs.

The Deparment of Justice accused North Korea of “concealing the origin of their ship” and accused Korea Songi Shipping Company, which was using the ship, of violating US law by paying US dollars for improvements and purchases for the ship through oblivious US financial institutions.

“This seizure should serve as a clear signal that we will not allow foreign adversaries to use our financial systems to fund weapons programs which will be used to threaten our nation,” Demers said.

US Coast Guard public affairs officer Amanda Wyrick told the AP that the US would investigate the ship in American Samoa. She did not say where the ship would be brought after the investigation was complete.

Read more: Here are the tactics that make North Korean artillery so dangerous

The ship was first detained by Indonesia in April 2018, because it was not broadcasting a signal required to give information to other ships and authorities, the Department of Justice said.