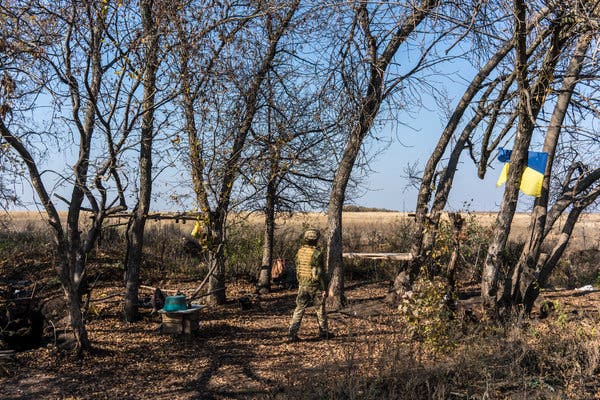 A Ukrainian army press officer at a front line position in Popasna in October.Credit…Brendan Hoffman for The New York Times

MOSCOW — As the formal peace process for the Ukraine war bogged down last month, the country’s president, Volodymyr Zelensky, reached out for a direct meeting with President Vladimir V. Putin of Russia, an intermediary in the talks revealed on Tuesday.

The United States does not participate directly in the negotiations, which are overseen by France and Germany. But Mr. Zelensky had pressed for a more robust American role, in part by seeking a meeting with President Trump in the White House.

That effort became entangled in a request for political favors in exchange for the White House meeting — a request that is now a focus of the impeachment inquiry in the House of Representatives. There has been no sign of United States pressure on Russia to sit down for the peace talks, and since September, five American officials who dealt with Ukraine have resigned.

With the negotiations delayed, Mr. Zelensky in late October offered a direct meeting, a former president of Kazakhstan, Nursultan Nazarbayev, said on Tuesday. Mr. Nazarbayev, who is acting as an intermediary, said he had conveyed the offer to Mr. Putin.

“I think we need a separate, personal meeting of the presidents of Russia and Ukraine,” Mr. Nazarbayev said at a policy conference in Kazakhstan.

In announcing the offer, Mr. Nazarbayev also summed up the stalemate in settlement talks for the Ukraine war, which has ground on for five years and killed more than 13,000 people. He suggested that Russia was not seeking to seize territory but rather to trade its de facto occupation of Ukrainian land for “other things.”

Most analysts say Russia, which arms and supports the separatist rebels who control parts of eastern Ukraine, wants changes to Ukraine’s domestic political system that would give Moscow a greater say over the country’s affairs.

“I already received agreement from Zelensky for a tête-à-tête,” Mr. Nazarbayev said. “I have told the president of Russia. Now we will see.” Mr. Nazarbayev suggested the leaders might meet in Nur-Sultan, the capital of Kazakhstan, which was recently renamed after him.

The Kremlin’s response on Tuesday was lukewarm. Mr. Putin’s spokesman, Dmitri S. Peskov, suggested in a conference call with reporters that the Russian leader would not immediately accept. Mr. Putin would not hold “a meeting just for the sake of a meeting,” he said.

Russia has for years denied involvement in the war, saying its soldiers in Ukraine are “on vacation” or otherwise not really in military service.

Mr. Zelensky ran on a promise to negotiate an end to the war. One tactic was an effort to maneuver Russia into negotiations that would recognize the Kremlin as a party to the conflict; one-on-one talks with Mr. Putin would signal a Russian role in the war.

The Kremlin has delayed the French- and German-led talks as it demanded ever more concessions. Mr. Zelensky agreed to a Russian-approved political formula for settlement and withdrew troops from the front in some locations — even pulling back some troops under fire, something he had said he would not do.

“He keeps raising the price because he sees that Zelensky is interested,” John E. Herbst, a former U.S. ambassador to Ukraine, said of Mr. Putin. “There are limits to the price Zelensky is willing to pay.”

One limit is domestic opposition. Concessions are inflaming Ukrainian nationalists, who deride his policies as capitulation. On a trip to the western Ukrainian city of Ternopil earlier this month, Mr. Zelensky was met by a crowd chanting “Shame! Shame!” for caving into Russia’s demands.

Some Russians also see the concessions as signs of weakness from a Ukrainian president whose hopes for American support have evaporated.

Mr. Putin “is not saying directly that Ukraine will have to negotiate because it lost support in the West,” Konstantin B. Gaaze, a politics professor at the Moscow School of Social and Economic Science, said in a telephone interview. “But he could say that.”

Andrew E. Kramer is a reporter based in the Moscow bureau. He was part of a team that won the 2017 Pulitzer Prize in International Reporting for a series on Russia’s covert projection of power. @AndrewKramerNYT