Over 40 years ago, scientists from 50 nations pivoted on a longstanding “global cooling” thesis that was going to blanket the earth in ice, and instead adopted what was then called the “CO2-climate problem” which would lead to theories on global warming, rising tides, and economic catastrophe.

“Now, four decades later, a larger group of scientists is sounding another, much more urgent alarm,” according to Bloomberg. 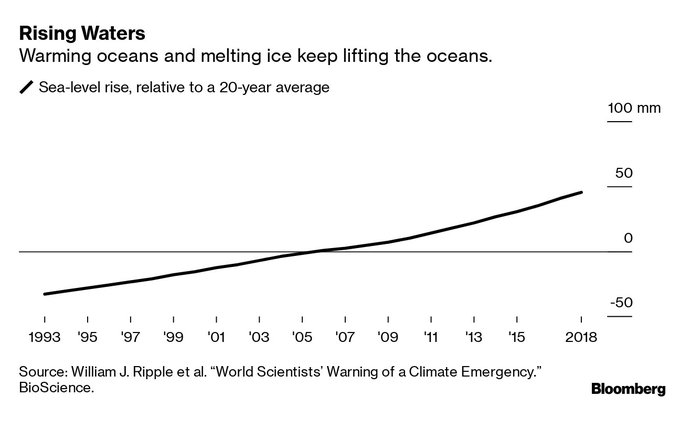 Over 11,000 experts from around the world have banded together to call for solutions to the ‘climate emergency,’ including population control – which “must be stabilized—and, ideally, gradually reduced—within a framework that ensures social integrity.”

“We declare, with more than 11,000 scientist signatories from around the world, clearly and unequivocally that planet Earth is facing a climate emergency,” warned the scientists in the Tuesday edition of BioScience, in a report that includes lots of scary charts we’re guessing Tony Heller could have some fun with.

When absorbed in sequence, the charts lay out a devastating trend for planetary health. From meat consumption, greenhouse gas emissions and ice loss to sea-level rise and extreme weather events, they lay out a grim portrait of 40 years of squandered opportunities.

The scientists make specific calls for policymakers to quickly implement systemic change to energy, food, and economic policies. But they go one step further, into the politically fraught territory of population control. It “must be stabilized—and, ideally, gradually reduced—within a framework that ensures social integrity,” they write. –Bloomberg

“We are encouraged by a recent surge of concern,” reads the letter. “Governmental bodies are making climate emergency declarations. Schoolchildren are striking. Ecocide lawsuits are proceeding in the courts. Grassroots citizen movements are demanding change, and many countries, states, and provinces, cities, and businesses are responding.

Perhaps world leaders will consult with China, which has reportedly been sterilizing Muslim women in their infamous reeducation camps.