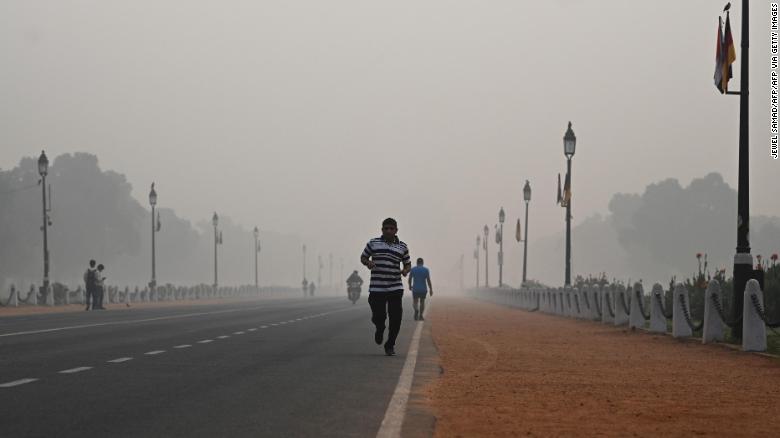 A man jogs along a street under smoggy conditions in New Delhi on November 1, 2019.

New Delhi (CNN) Five million New Delhi children will be given face masks by the government as the city battles heavy smog so toxic that it threatens to force schools to shut.

India’s capital — which has been ranked the most polluted city in the world — experienced hazardous levels of pollution on Friday afternoon, shooting up to as high as 743 particles of PM2.5 per cubic meter on the air quality index in some areas. Any level above 100 is considered unhealthy.
If air pollution stays at this level for more than 48 hours, authorities will implement emergency measures for the first time this year, a Central Pollution Control Board official told CNN. Those measures include shutting schools, stopping construction work, banning trucks from entering the city, and imposing a rule whereby cars with odd and even number plates can only drive on alternate days.
On Friday, Delhi‘s Chief Minister Arvind Kejriwal announced that authorities had started to distribute 5 million face masks to schoolchildren in the city, which is home to over 18 million people.

It is very imp that we protect ourselves from this toxic air. Through pvt & govt schools, we have started distributing 50 lakh masks today

I urge all Delhiites to use them whenever needed 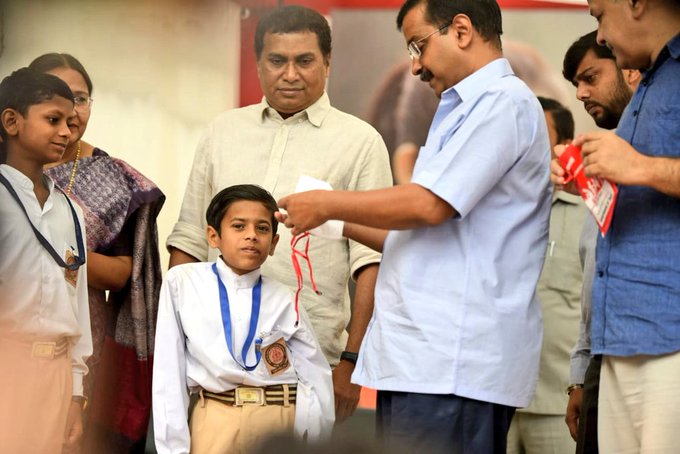 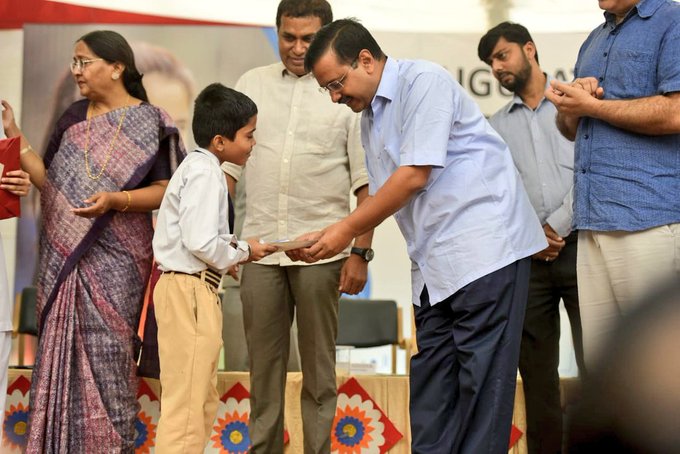 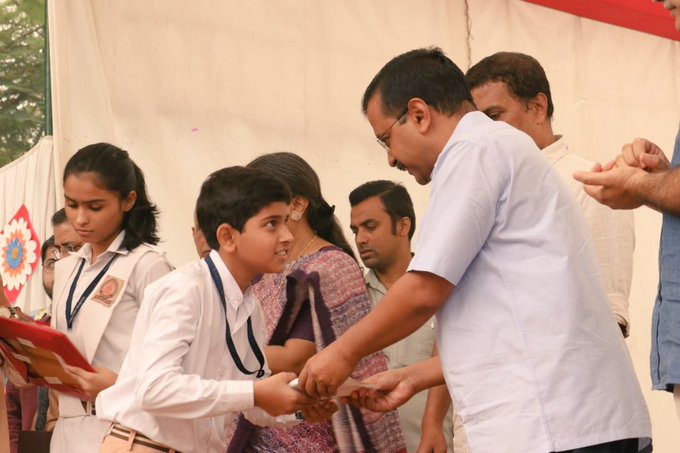 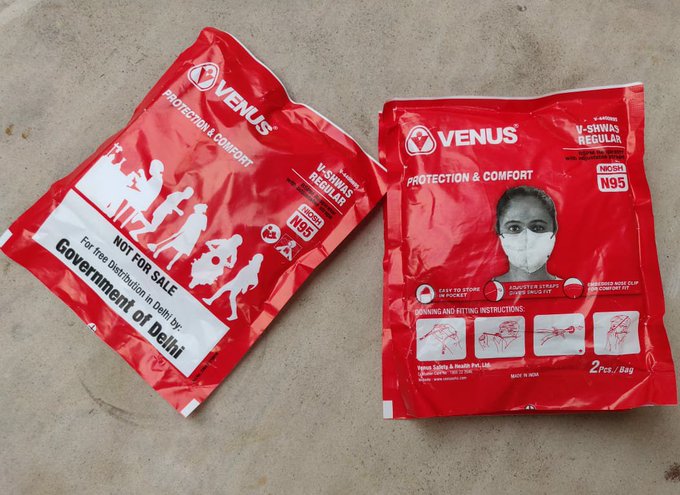 Earlier in the day, Kejriwal hit out at the governments of Punjab and Haryana, which he said contributed to New Delhi’s pollution as farmers in those areas burned crops despite bans.
New Delhi’s air is often bad at this time of year. In addition to crop burning, the smog worsens as people set off firecrackers to celebrate Diwali, the Hindu festival of lights. 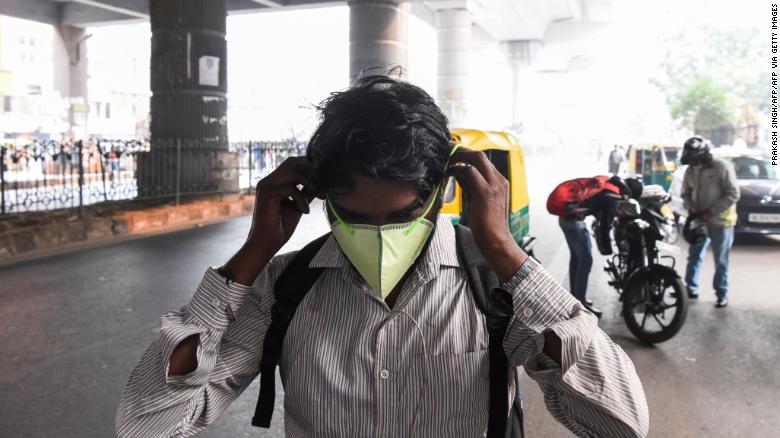 Taking cars off the roads

Even before the heavy smog, the city’s government signaled that it would implement the odd-even car rule this month for the first time since 2016, meaning more than 4 million cars could be taken off the road each day. Anyone who breaks the rules faces a 4,000 rupee ($56) fine.
But not everyone has to follow the rules. Senior leaders in the government, cars carrying children wearing school uniform, cars with only female passengers, and police vehicles are exempt.
New Delhi is home to more than 8.8 million registered motor vehicles, more than any other Indian city, according to government figures from 2016.
And those cars appear to be a big part of the problem. A 2006 study — which was quoted by an official government report released in 2016 — found that cars contributed to 72% of New Delhi’s pollution. The government hasn’t released more recent figures. 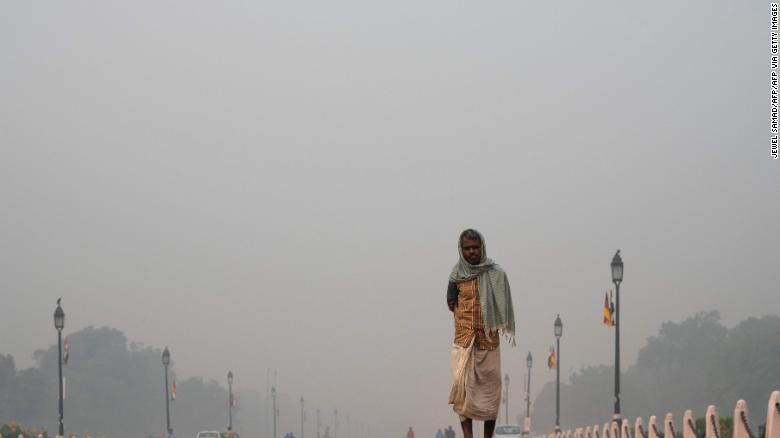 A man walks along a street as a heavy smog hits New Delhi on November 1, 2019.
The odd-even rule has been greeted with mixed reactions from the public, with some slamming it as “inconvenient” and others saying it will help raise awareness about the city’s pollution.
With elections coming up next year, some opposition party politicians have accused the local government of trying to score points with voters.
Tajinder Pal Singh Bagga, the spokesman from the New Delhi arm of Indian Prime Minister Narendra Modi’s Bharatiya Janata Party, said the odd-even rule had already been tried — and it didn’t help. “This is totally for the elections,” Bagga told CNN. “If they had found a permanent solution, then all this would not be needed.”
But Saurabh Bhardwaj, the chief spokesman for the ruling Aam Aadmi Party in the city, said the party had done other things to stamp out the smog, including closing thermal power plants. Although there had been some public push back to the odd-even rule, Bhardwaj said it wouldn’t change the party’s stance.
“For pollution, we are ready to take that risk (to our popularity).”