A 6.4 magnitude earthquake has struck Albania, bringing down buildings and leaving people trapped under rubble.

At least 13 people have died. One man was killed after jumping from a window in panic, a defense ministry spokeswoman said.

The quake hit 34km (21 miles) north-west of the capital, Tirana, in the early hours of Tuesday.

Hours later, a separate earthquake struck the city of Mostar in Bosnia. There were no reports of casualties.

Albanian Prime Minister Edi Rama wrote on Twitter: “We have victims. We are working to do everything possible in the affected areas.”

More than 600 people have been treated in hospital, Albanian state media reported, including more than 300 in Tirana and in the coastal city of Durres.

Schools will be closed for the day. 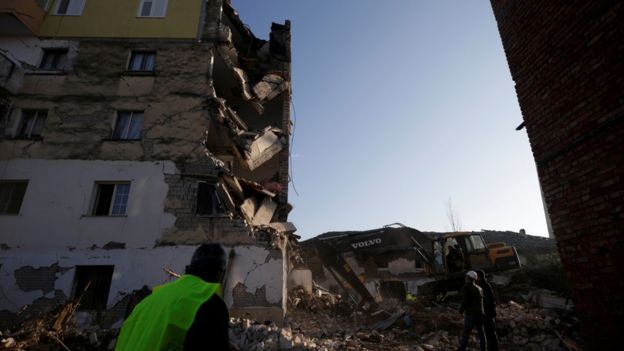 Emergency workers told Albanian media that one of the dead was an elderly woman who had managed to save her grandson by cradling him with her body.

The defense ministry spokeswoman confirmed firefighters and army staff were helping residents caught under the rubble in Durres, where four people were killed.

Three of those who died were in the town of Thumane, 40km to the north-west of Tirana and close to the epicenter. There are fears more people are trapped under rubble.

The man who jumped from the balcony was killed further north, in Kurbin. Another person died in Lezha. 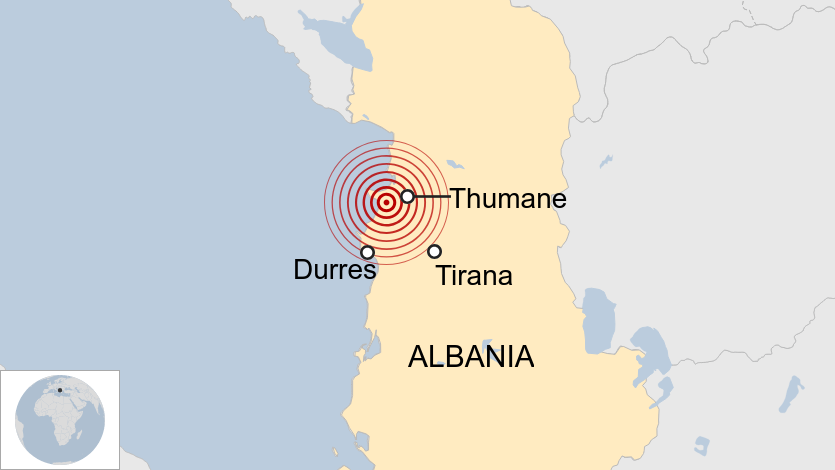 A man in Durres told local news channel News24 that his daughter and niece were among those trapped inside a collapsed apartment building.

“I talked with my daughter and niece on the phone. They said they are well and waiting for the rescue. Could not talk to my wife. There are other families, but I could not talk to them.”

Rescuers in the city were seen trying to free a young boy trapped in the rubble.

Besar Likmeta, a journalist based in Durres, told the BBC: “I can see right now the firefighters using their bare hands and trying to cut through concrete and iron slabs of the collapsed building.

“There are Red Cross crews and police special intervention units and army. But there is no clear count of how many people might still be missing.”

Albania was ill-equipped to deal with the situation, he said and had appealed for outside help. 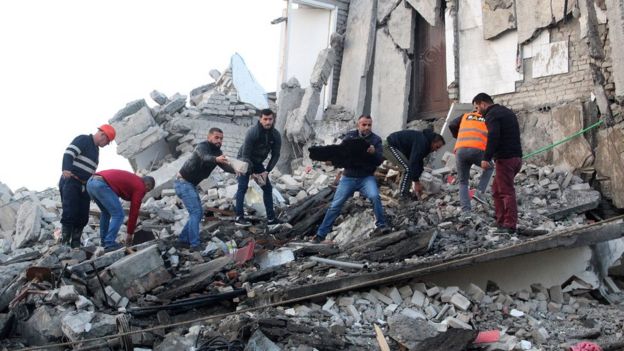 People search through the rubble of a building in Thumane, Albania – EPA

There have been a number of aftershocks, including one of 5.3 magnitude, the European-Mediterranean Seismological Centre said.

The Balkans are in an area prone to seismic activity.

Tuesday’s earthquake has been described by authorities as the strongest to hit Albania in decades.