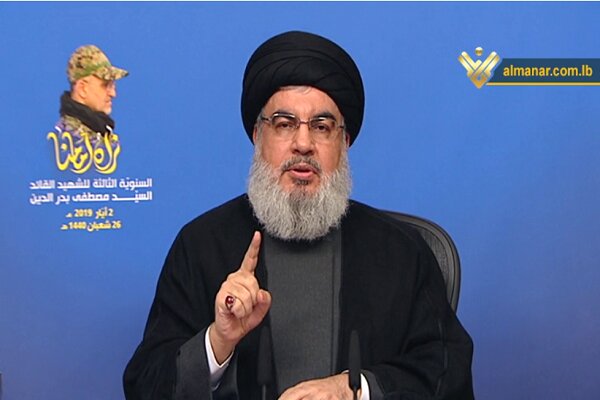 TEHRAN, May 02 – Hezbollah Leader Hassan Nasrallah warned that if forces of the Israeli regime dare to attack southern Lebanon, they will be destroyed.

He made the remarks while addressing his supporters via a televised speech broadcast live from the Lebanese capital of Beirut on Thursday evening.

Nasrallah dismissed the possibility of a new Israeli war on Lebanon this summer, describing such speculation and related media reports as “psychological warfare.”

“All in Israel know that any war on Lebanon needs to be decisive and swift. Hezbollah remains fairly capable and utterly determined irrespective of sanctions imposed on it. The Zionist regime fears launching a new war, even on the besieged Gaza Strip, let alone Lebanon. All Israeli battalions will be destroyed under the eyes of mainstream media and the entire world, if they dare enter Lebanon. We will not compromise on even one iota of the Lebanese soil,” Nasrallah highlighted.

Commenting on the presence of Hezbollah fighters in neighboring Syria, Nasrallah said the fighters had entered Syria in order to thwart US, Israeli and Saudi conspiracies there, noting, “What happened in Syria was a multifaceted scheme, and not a change for democracy.”

The Hezbollah chief then blamed certain Persian Gulf Arab states for funneling money and munitions to the ISIL terrorist group, emphasizing that the Takfiris could not have been able to overrun large swathes of land in Iraq and Syria without their support and media coverage.

Nasrallah added that ISIL has its roots in the radical ideology of Wahhabism, which is being preached in Saudi Arabia.

“The United States and Saudi Arabia created and sponsored Daesh. One of the main objectives of the West in this regard was to defeat Hezbollah. Daesh was created by Washington and tasked with standing against all those who confront US-Israeli plots in the region. This is what American officials have acknowledged themselves,” the Hezbollah leader underlined.

Nasrallah said ISIL was created in a bid to provide Pentagon with an excuse to dispatch military forces to Iraq and Syria.

“Daesh has served the US, Israel and other enemies of our nation. It has destroyed several armies and societies in the region. The terror outfit still remains a threat as its ideology persists and its sleeper cells can be resurrected,” he said.

The Hezbollah chief also pointed to US President Donald Trump’s humiliation of Saudi Arabia at a campaign rally in Green Bay, Wisconsin, on April 27, where he boasted to his supporters about a bizarre phone call with King Salman bin Abdulaziz Al Saud. Trump asserted that he had made the monarch pay more money in exchange for the military support that the oil-rich kingdom receives from Washington.

“I feel pity for the Saudi king in the wake of Trump’s humiliation of him in his latest remarks. Trump has so far fulfilled his [2016 presidential] campaign promises concerning the so-called deal of century [on the Israeli–Palestinian conflict] and milking Saudi Arabia,” Nasrallah commented.

“The US secretary of state [Mike Pompeo] has even admitted that he is a liar, a deceiver and a thief,” he said.

The Hezbollah chief finally condemned Saudi Arabia over beheading 37 of its nationals, emphasizing that petrodollars and financial gains prevented the so-called advocates of human rights from denouncing the heinous mass executions.