The massive migrant caravan said to be making its way toward the U.S.-Mexico border is a result of Congress “not acting and continuing to encourage illegal immigration”, according to a border agent and top union official.

Hector Garza, the vice president of the National Border Patrol Council, made the comments on ‘Fox & Friends’ Thursday following the release of a video showing nearly 300 migrants entering Texas. Behind them, a new caravan estimated to contain up to 10,000 migrants is now heading through Mexico, with America its intended destination.

“This caravan is no accident. It’s actually the result of all these sanctuary policies,” Garza said. “It’s the result of Congress not acting and continuing to encourage illegal immigration.”

Garza says migrants are taking advantage of the way the U.S. immigration system processes asylum seekers in order to gain entry to the country.

“President Trump is doing everything in his power to be able to stop this crisis but Democrats and some activists are just doing everything behind his back to undermine his authority,” he told ‘Fox & Friends’.

Garza says some of the Democratic 2020 presidential candidates are admitting that there is a problem ongoing at the U.S. border, but ultimately, he believes they aren’t doing enough.

“If you hear what Senator Bernie Sanders has been saying and Cory Booker they are already acknowledging that there is a crisis on the border,” he said. “But the question is, ‘what are you doing about it’?” 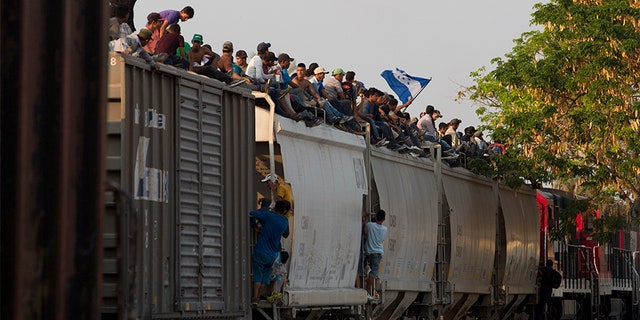 Central American migrants ride atop a freight train during their journey toward the U.S.-Mexico border, in Ixtepec, Oaxaca State, Mexico, on Tuesday. (AP)

Garza hailed Trump for drawing attention to the surge in migrants, saying “no other president has held Mexico accountable” like him.

“They are acting, they are moving and they are stopping some of these caravans because if not the situation at the border will only get worse,” he added.

A nurse walking by a triage tent set up outside of the emergency room at...