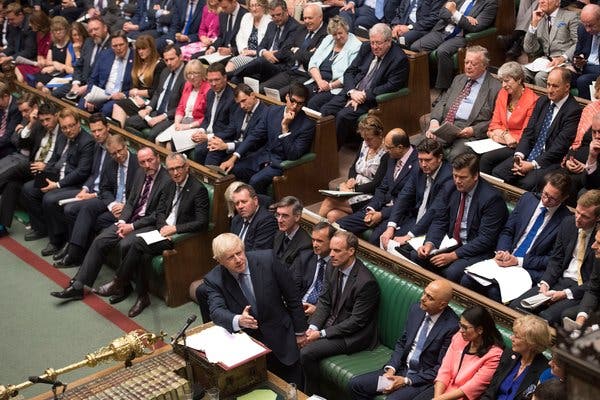 LONDON — He jabbed his finger in the air and shook his head theatrically. He dared the opposition to back his call for an election and sneered that the Labour Party’s leader was a “chlorinated chicken.”

By the time Prime Minister Boris Johnson finished taking questions in Parliament on Wednesday, he had ushered in a new season of political mayhem in Britain, one in which the voters are now as likely as their feuding leaders to resolve the questions over how and when Britain should leave the European Union.

The raucous spectacle in the House of Commons illustrated the obstacles Mr. Johnson will face as he tries to lead Britain out of the European Union next month. On Wednesday, Parliament handed the prime minister two stinging defeats.

It first blocked his plans to leave the union with or without an agreement. And it then stymied his bid, at least for the moment, to call an election for Oct. 15, out of fear he could secure a new majority in favor of breaking with Europe, deal or no deal.

The frenzied maneuvering showed how Brexit keeps propelling the country ever deeper into uncharted political territory, where centuries of unwritten rules and conventions are giving way to a brawl over the future of one of the world’s oldest democracies.

The upheaval in Parliament on Wednesday was the latest and perhaps the ultimate test of a political system that has been under unrelenting strain since the British voted narrowly to leave the European Union in June 2016.

Britain has since unwittingly become a laboratory for how a deeply rooted parliamentary democracy can be shaken to its core by populism, especially when wrapped in the democratic legitimacy of a public referendum.

Parliament has become a theater, beamed live around the world, in which democracy’s messy, self-interested and self-destructive tendencies are laid bare in real-time.

Despite the vote by lawmakers defying the prime minister’s call to go to the polls, Britain still appears headed for a general election in the coming weeks or months, with the opposition likely to agree to a vote once a law forbidding a no-deal Brexit is firmly in place.

An election could clarify a debate that has become hopelessly muddled. A clear victory would give Mr. Johnson’s Conservative government a mandate to withdraw, regardless of whether it strikes an agreement with officials in Brussels. A defeat would eject him from office and in all likelihood delay and reshape the terms of Britain’s exit. 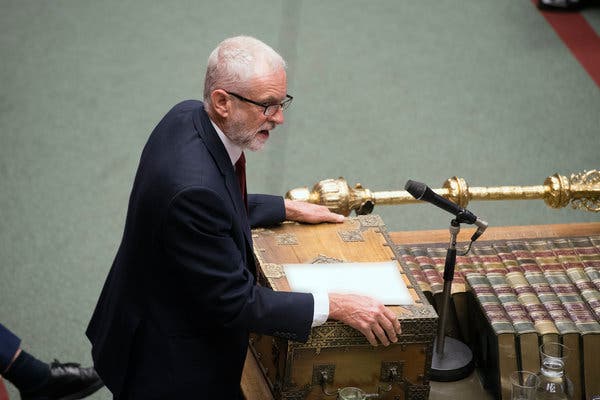 Jeremy Corbyn, the leader of the opposition, in the House of Commons on Wednesday. Mr. Corbyn complained that Mr. Johnson refused to answer questions about the economic costs of a no-deal Brexit.CreditJessica Taylor/UK Parliament

Yet an inconclusive result — equally plausible, given the splintered nature of British politics — could leave the nation even more paralyzed than it is now. With one of the last political mechanisms exhausted, an indecisive vote could deepen divisions and reinforce fears that Brexit is a problem that defies a democratic solution.

In many ways, Britain appears set on a course, not unlike that in the United States, where President Trump, an ally of Mr. Johnson’s, has galvanized his political base by vilifying his opponents. Like Mr. Trump, Brexit has not just dominated the nation’s political debate but changed the very nature of its politics.

“You have a complete fracturing of the British political system and a British government that has ground to a halt,” said Frank Luntz, a Republican pollster who advised the Conservative Party in past elections and knew Mr. Johnson as a student at Oxford.

“Everyone is seeking to be as dogmatic and punitive as they can,” he said. “This is doomsday politics at its worst.”

If Mr. Johnson can ultimately get Parliament to agree to an election, he hopes to mobilize those who voted to leave by tarring his opponents as lackeys of Europe. He is ruthlessly purging the ranks of the Conservative Party to make it more radically pro-Brexit and fend off threats from a new Brexit Party.

Mr. Johnson got an endorsement from Mr. Trump. “He’s in there fighting,” the president said. “Boris knows how to win.”

The parallels between Mr. Johnson’s campaign and Mr. Trump’s takeover of the Republican Party are obvious, but there are important differences as well. Lawmakers in Britain have pushed back vigorously on Mr. Johnson’s tactics, with even members of the prime minister’s party rebelling against his drive for a swift exit.

The proposed timing of a vote, before the Oct. 31 deadline to leave the European Union, has stoked suspicions that Mr. Johnson is acting in his own interests rather than the nation’s. Rather than embracing the call for an election, the Labour Party insisted that Parliament first prohibit Mr. Johnson from pursuing a no-deal Brexit before it would agree.

On Wednesday, Parliament moved closer to achieving that. By a vote of 327 to 299, lawmakers advanced a bill that would tie Mr. Johnson’s hands-on Brexit, barring any departure without a deal. The bill now goes to the House of Lords, which must give its assent.

Until it’s the law of the land, Parliament is determined to resist Mr. Johnson’s push for a new election. And late Wednesday night, Mr. Johnson failed to win in another vote the two-thirds majority he needed to call an election. 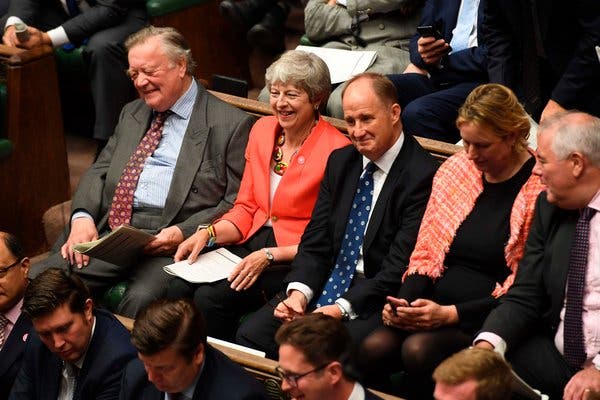 The expelled Conservative lawmaker Kenneth Clarke, left, and Theresa May, the former British prime minister, in the House of Commons on Wednesday.CreditJessica Taylor/UK Parliament

“Under normal circumstances, no opposition party would ever get in the way of a governing party calling it quits,” said Baroness Rosalind Scott, a member of the House of Lords and a former president of the Liberal Democrats. “But all the normal rules are gone, which makes it difficult to predict the outcome.”

As Parliament went back into session this week, the signs of Britain’s political dislocation were everywhere.

Mr. Johnson took questions while behind him sat members of the Conservative Party, some of whom he had expelled a day earlier for voting against his call to withdraw, with or without a deal. Among those were party elders Kenneth Clarke, who has served in Parliament since 1970 and is known as the Father of the House, and Nick Soames, a grandson of Mr. Johnson’s hero, Winston Churchill.

Some Conservatives rose to Mr. Johnson’s defense, but others scolded him for trying to cut off debate on Brexit by curtailing the number of days Parliament could legislate before the deadline. Those tactics prompted an outburst from an opposition figure.

“Are you a dictator or a democrat?” Ian Blackford, a Scottish leader in Parliament, bellowed at Mr. Johnson.

“I am a democrat,” Mr. Johnson replied, “because I not only want to respect the will of the people in the referendum but want to have an election.”

Prime Minister’s Questions, a weekly ritual dating back to 1961, is often marked by grandstanding, catcalls and rowdy interruptions. But Wednesday’s session seemed especially unruly, less an effort to extract information from the government’s leader than an opportunity for Mr. Johnson and the Labour leader, Jeremy Corbyn, to position themselves for the coming campaign.

After challenging Mr. Corbyn to a vote, Mr. Johnson pointed across the well of the House and declared, “There’s only one chlorinated chicken that I can see in this house, and he’s on that bench.”

Mr. Corbyn has warned often that Brexiteers will force Britain into a one-sided trade deal with the United States, in which the British will be forced to import chemically treated meat and poultry.

Labour’s legislation to prevent him from withdrawing without a deal, Mr. Johnson said, amounted to a “surrender bill” to Europe. He branded it a strategy of “dither and delay,” repeating the phrase like it was a poll-tested message for a campaign. 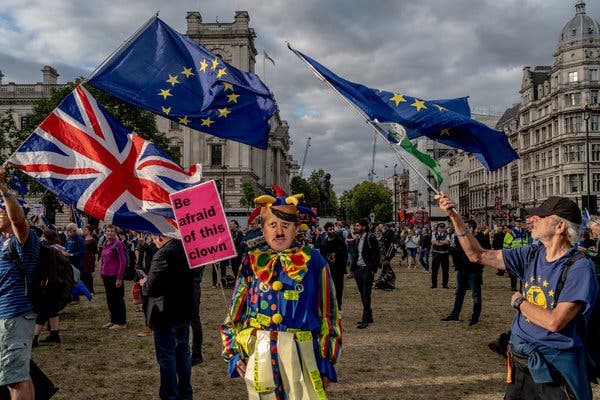 Anti-Brexit protesters in London on Wednesday.CreditAndrew Testa for The New York Times

For his part, Mr. Corbyn complained that Mr. Johnson refused to answer questions about the economic costs of a no-deal Brexit. The government, he said, declined to release an internal study, known as Operation Yellowhammer, which he said presented a dire picture of food and medical shortages.

“He’s desperate, absolutely desperate, to avoid scrutiny,” Mr. Corbyn declared. “If the prime minister does to the country what he did to his party over the last 24 hours, a lot of people have a great deal to fear.”

That line drew blood: Mr. Johnson’s purge the previous day has left the Conservative Party in a state of near civil war. The prime minister watched on Tuesday as one of his members crossed the House floor and sat with the Liberal Democrats, officially erasing his government’s one-seat majority. The subsequent expulsions left the government 21 seats short of a majority.

For Mr. Johnson, a disheveled figure known more for his mop of blond hair than for his legislative skills, an election would be a chance to take his case out of the gilded halls of Westminster and directly to the British public. It is a debate he won in 2016 when he led the pro-Brexit referendum campaign, and he won the party leadership this summer partly because members believed he was the best candidate to lead them into a general election.

Mr. Johnson is gambling that the Conservatives, riding slightly higher in the polls, can win a solid majority over Labour, which is mired in its own Brexit divisions and saddled with a leader, Mr. Corbyn, whose leftist views put off middle-of-the-road voters. A strong victory, he said, would allow him to go into negotiations with European officials with a stronger hand than his predecessor, Theresa May.

In the three years since the referendum, however, people here have heard harrowing accounts of what could happen if Britain leaves Europe without a deal: shortages of food and medicine; trucks lined up for miles at newly installed border posts on each side of the English Channel; chaos at airports and train stations; and violence in Ireland after a hard border once again bisects the island.

That explains Mr. Johnson’s eagerness to hold the vote in mid-October, just weeks before the Oct. 31 deadline to leave the European Union, rather than afterward, when the costs of a disorderly Brexit could become clearer to voters.

“What he doesn’t want is an election down the road when we’re all eating barbecued rat,” said Baroness Scott.

There is no indication, however, that even a resounding election victory for Mr. Johnson would make Europe any more amenable to a new deal.

Officials in Brussels said they have no plans to bend on the demands they made of Mrs. May, specifically on the Northern Ireland border, which Mr. Johnson has said he would not accept. Europeans have watched the spectacle in London with a mixture of bemusement, distaste, and concern.

“Observing how the prime minister behaves, both to Parliament and opponents in his own party, is certainly not an exercise in trust-building,” said Norbert Röttgen, chairman of the Foreign Affairs Committee of the German Parliament. “We prefer to stay out of this jungle.”

A version of this article appears in print on Sept. 4, 2019, Section A, Page 1 of the New York edition with the headline: British Politics in Chaos As Parliament Stymies Johnson in 2 More Votes. Order Reprints | Today’s Paper | Subscribe