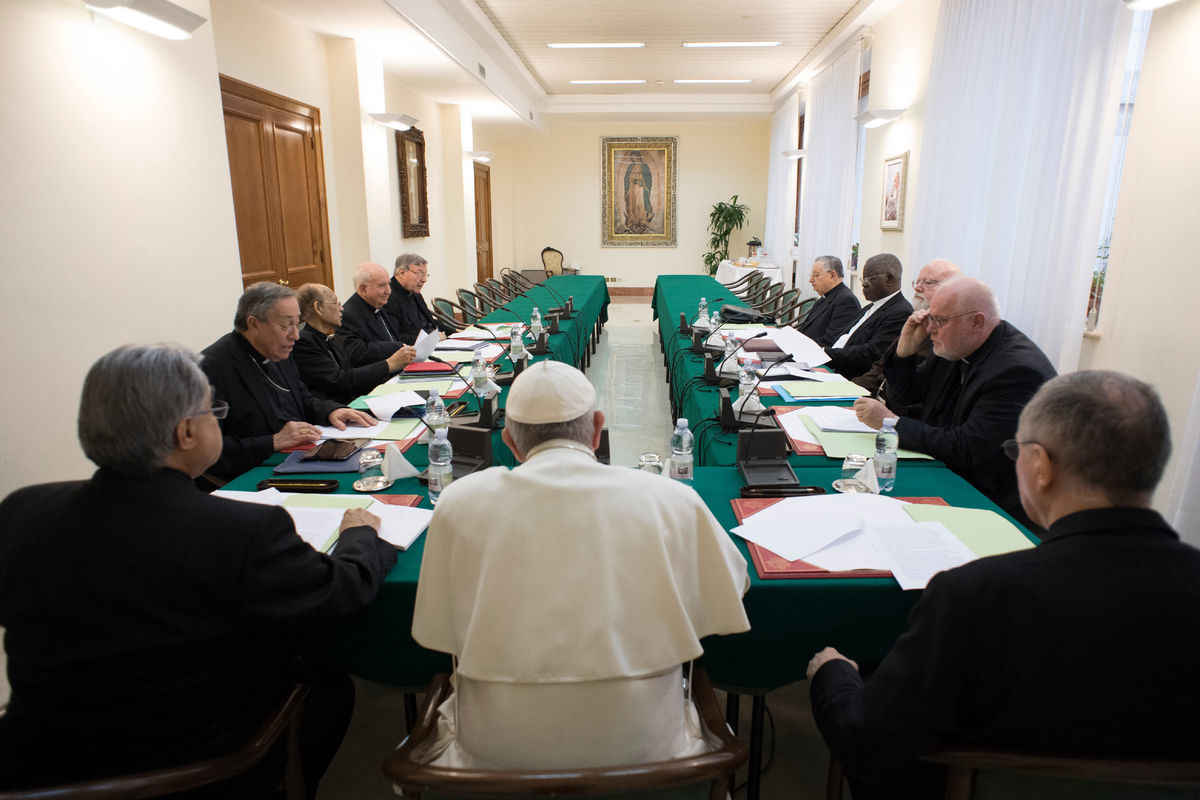 Pope Francis leads the 18th meeting of his Council of Cardinals at the Vatican. CNS FILE PHOTO/L’OSSERVATORE ROMANO

Beset by controversy, the pope’s ‘kitchen cabinet’ of advisers is a distracted bunch

According to William Shakespeare, “the course of true love never did run smooth.” Pope Francis might be forgiven right now for thinking much the same thing is true of efforts to reform the Roman Curia, the central bureaucracy of the Vatican.

Pope Francis was elected in March 2013 partly on a mandate to clean up a perceived governance mess in the Vatican, and shortly afterward he created a new body to advise him on reform — a council of eight cardinal advisers from around the world, swiftly dubbed the “C8.” After the pontiff added his new secretary of state, Italian Cardinal Pietro Parolin, it became the “C9.”

To date, many observers would say the results have been a bit underwhelming — the creation of three new financial oversight structures that currently seem adrift or toothless, an overhaul of the Vatican communications operation that recently presided over the “lettergate” fiasco, and, in general, a fairly widespread sense of confusion about what exactly this “reform” is supposed to be or where it’s going.

The C9 wrapped up its April 24 meeting with the formal agenda that included a discussion of the theological status of national and regional bishops’ conferences, human resources and cost containment for the Vatican, and more rapid procedures in the Congregation for the Doctrine of the Faith for handling charges against clergy of sexual abuse of minors.

In reality, however, one has to imagine those are hardly the only topics that came up, because the fact of the matter is that at least five of Pope Francis’ cardinal advisers came into the meeting with compelling reasons for feeling distracted.

One of those cardinals wasn’t even in the room, and hasn’t been for a while: Australian Cardinal George Pell, who’s on a leave of absence as head of the new Secretariat for the Economy as he fights off charges of “historic sexual offenses” in his native country.

As Angelus News went to press, an Australian magistrate was expected to rule on May 1 whether the case against Cardinal Pell will proceed to trial. Depending on what happens, Cardinal Pell will either be significantly delayed before he attends his next C9 meeting, or he may never make it back at all.

Meanwhile, 84-year-old Cardinal Francisco Erràzuriz Ossa of Chile no doubt has a looming May 14-17 summit between his country’s 32 bishops and Pope Francis on his mind.

The session comes amid arguably the worst sexual abuse scandal ever to hit a Latin American nation, which pivots on accusations that certain members of the Chilean hierarchy either turned a blind eye, or deliberately concealed crimes committed by the country’s most notorious abuser priest, Father Fernando Karadima.

Victims and critics of the Church’s response to the abuse scandals have singled out Cardinal Erràzuriz as a key figure in giving Pope Francis “bad information” about the nature of the situation, including the culpability of Bishop Juan Barros, appointed by Pope Francis to the small Diocese of Osorno in 2015 and defended by the pontiff on several occasions until a recent letter in which the pope acknowledged “serious errors of assessment and perception” due to a “lack of truthful and balanced information.”

Cardinal Erràzuriz is facing hard questions about his own role in the abuse scandals, including a searing indictment from one of Father Karadima’s victims, who called him a “miserable man … [whose] evilness is known.”

Going forward, the focus on Cardinal Erràzuriz may expand to include not only his role in the Karadima case, but potential involvement in others as well — some which, Chilean observers warn, could be even more explosive.

Cardinal Reinhard Marx of Germany, meanwhile, is currently trying to put out fires related to a plan by the German bishops to allow the Protestant spouses of Catholics to receive Communion at a Catholic Mass “in individual cases” and “under certain conditions,” provided that they “affirm the Catholic faith in the Eucharist.”

Cardinal Marx, leader of the German bishops’ conference, and six other German bishops were slated to meet with Vatican officials on May 3 to “deal with the theme of the eventual access to the Eucharist for non-Catholic spouses in mixed marriages,” according to a Vatican announcement.

In this, a group of seven bishops led by Cardinal Rainer Woelki of Cologne wrote to the Vatican to request “clarifications” on the proposal, which is usually shorthand for wanting it blocked or delayed.

Cardinal Sean O’Malley of Boston is not presently engulfed in any scandal or doctrinal controversy himself, but as the president of the Vatican’s Pontifical Commission for the Protection of Minors, he’s indirectly drawn into at least thinking about every abuse-related challenge facing the Church today.

He’s concerned about helping the new members of the commission get their legs under them, having just wrapped up the first meeting since new members were appointed, and also figuring out a new mechanism to ensure the commission hears the voices of victims even when they’re not members.

At the same time, Cardinal O’Malley likely is taking a special interest in the drama in Chile, since his own critical reaction to the pope’s remarks accusing victims of “calumny” in January seems to have helped jar something loose in Pope Francis’ thinking, and because it was Cardinal O’Malley who delivered a letter from the Chilean victims to the pope.

Finally, the coordinator of the C9, Cardinal Oscar Rodriguez Maradiaga of Honduras, is also facing his own distractions these days, including accusations from former seminarians of sexual misconduct against his own auxiliary bishop, Juan José Pineda Fasquelle of the Archdiocese of Tegucigalpa.

Media reports suggested a papal investigation was carried out in 2017, and that it may have involved allegations of financial irregularities against Cardinal Maradiaga himself, although he’s strongly denied those claims, calling them “half-truths, that are in the end worse lies,” suggesting he’s being attacked as a means of derailing Pope Francis’ reforms.

Cardinal Maradiaga has also had challenges on the health front, undergoing chemotherapy treatment earlier this year in Houston, Texas, for prostate cancer.

Perhaps members of the C9, despite it all, will be able to bring the necessary focus to the problem of working out a meaningful reform strategy, one able to dispel the growing suspicion among many observers that things are stalled.

If that doesn’t happen, however, we probably won’t have to look too far to figure out why.