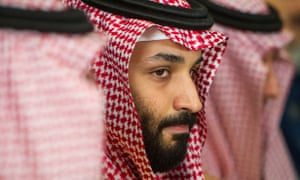 A former head of MI6 has said all the evidence suggests Saudi Arabia’s Crown Prince Mohammed bin Salman was behind the death of the journalist Jamal Khashoggi, and that the theory that rogue elements in the Saudi military were responsible was “blatant fiction”.

Sir John Sawers told the BBC his assessment was based on conversations with senior Whitehall sources and his knowledge of the Turkish intelligence services.

The comments came after Donald Trump said he presumed Khashoggi, a Washington Post columnist, was dead and that the consequences for Saudi Arabia would be “very severe” if its leaders were found to have ordered the dissident journalist’s killing.

Sawers, who was head of the British secret intelligence service until 2014, also claimed that the crown prince would only have acted if he believed he had licence from the White House to behave as he wished.

“I think President Trump and his ministerial team are waking up to just how dangerous it is to have people acting with a sense that they have impunity in their relationship with the United States,” Sawers said.

“If it is proven, and it looks very likely to be the case, that [Prince Mohammed] ordered the killing of the journalist it is a step too far – one that the UK, the EU and the US are going to have to respond to.”

He said the “rogue elements” theory of Khashoggi’s death “simply doesn’t hold water” and that it“further undermines respect for America when it panders to such a blatant fiction”.

Sawers said he respected the thoroughness and professionalism of the Turkish intelligence services: “The level of detail that is coming out from Turkish security sources is so clear that some form of tape must exist.”

He suggested the tensions between Turkey and Saudi Arabia over the past decade would mean Turkey “will be monitoring very closely what goes on inside Saudi offices. They may well have had the consulate general bugged in some way, or there may have been other devices carried out by the squad that carried out the assassination that they were able to intercept.

“The level of detail is very damning of the hit squad, and [their reported identities] show how close are they are to the crown prince”.

Sawers’ remarks are likely to be treated as incendiary in Washington.

He predicted that members of the Saudi royal family, business community and conservative religious clerics will take advantage of the crown prince’s involvement to undermine him. “There will be a reaction inside Saudi Arabia to this dreadful killing and there will be some correction.”

Reports in Turkey say Khashoggi was brutally murdered and dismembered inside the consulate by members of an assassination squad with ties to the crown prince. The Saudis have dismissed those reports as baseless but have yet to explain what happened to Khashoggi, a contributing columnist for the Washington Post who wrote critically of Prince Mohammed’s rise to power.

According to British sources Saudi Arabia may take as long as week to receive and respond to a Turkish government report expected to detail how Khashoggi was killed by a 15-strong Saudi hit squad.

Turkey is trying to use the covert intelligence it has already gathered, possibly by bugging, to gather more conventional evidence that it can share with the world to prove its theory. A search is under way in woods on the outskirts of Istanbul and to another Turkish city near the Sea of Mamara, 56 miles (90km) south of Istanbul.

Turkey has been leaking details of Khashoggi’s gruesome death based on intelligence reports, but the country’s foreign minister, Mevlüt Çavuşoğlu, said the raw intelligence including any audio recordings has not been given to any foreign power, such as Mike Pompeo, the US secretary of state.

The UK foreign secretary, Jeremy Hunt, told LBC there would be “very, very serious consequences” for UK-Saudi relations if reports of Khashoggi’s murder were true, but appeared to steer away from ending arms sales, pointing out that Saudi Arabia was a strategic partner in the battle to constrain Iran.

Hunt said the scale of the British response would depend on how Saudi Arabia responded to the Turkish findings, but it is hard to know if definitive evidence will be published showing Prince Mohammed’s complicity.

It is thought that Turkey may possess as-yet unreported intelligence that could go further in revealing the individuals responsible for ordering a gang of senior officials to travel to Istanbul to murder Khashoggi. There have been rumours that the crown prince would be required to step aside as the price for restoring confidence of overseas investors, but the US has been told Saudis were preparing to pin the blame on Major General Ahmed al-Assiri for either over-stepping or misunderstanding orders given by Prince Mohammed.

The senior army officer has been a frequent visitor to London in order to explain the rationale behind the Saudi war to save the UN recognised government from Houthi rebels.

The UK Foreign Office confirmed that the UK trade commissioner for the Middle East, Simon Penney, and the UK ambassador to Saudi Arabia, Simon Collis, would both attend the controversial Riyadh investment conference next week. A host of politicians, bankers, and media chiefs have withdrawn from the event.

Liam Fox, the UK trade secretary, pulled out on Thursday in light of the Khashoggi case. The continued attendance of Penney and Collis, underlining the UK’s reluctance to damage its entire relationship with Saudi Arabia, was confirmed in a written answer to the Plaid Cymru MP Jonathan Edwards.

Edwards said: “Spinelessly sending the British ambassador to this ‘Davos in the desert’ shows just how desperate the Westminster government is to appease despots. Agents of the British state – be they ministers or diplomats – should not be affording the rogue Saudi regime the legitimacy of their presence.