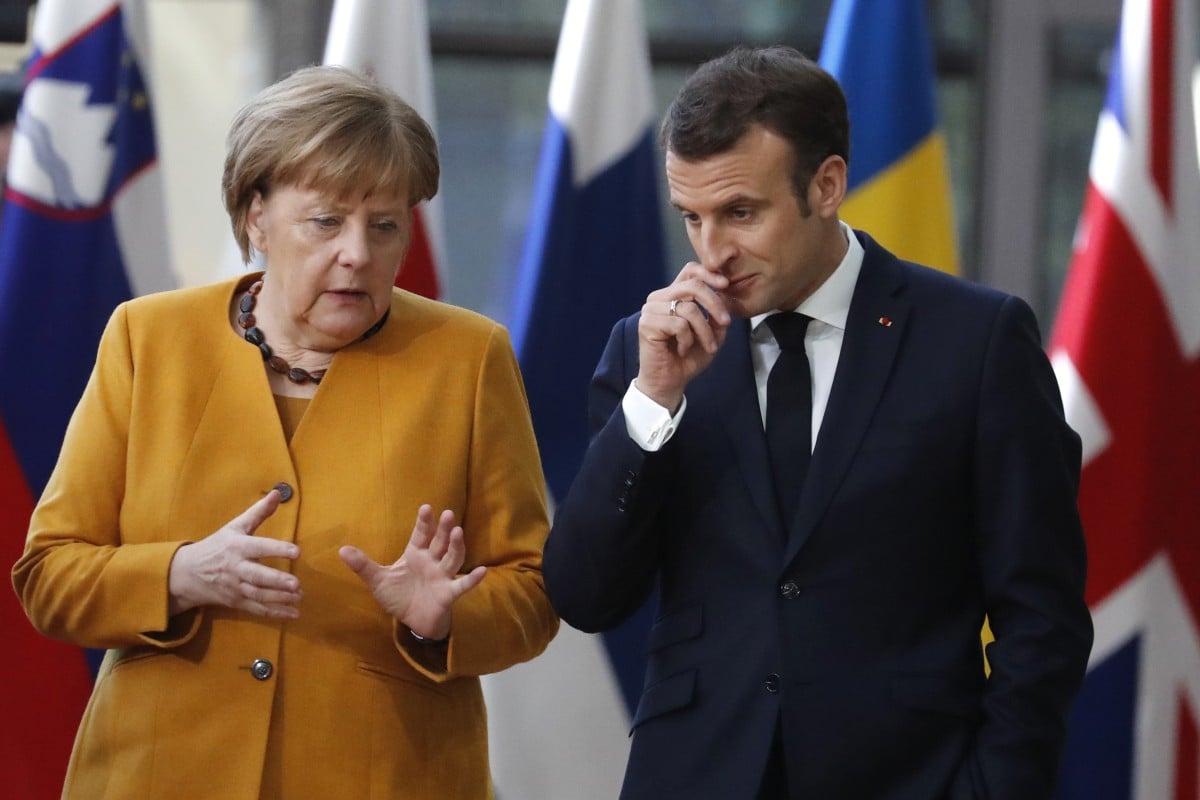 Angela Merkel will join Emmanuel Macron (right) and Jean-Claude Juncker for a meeting with Xi Jinping in Paris on Tuesday. Photo: AP

French President Emmanuel Macron has invited Germany and the European Union to join a meeting with Chinese leader Xi Jinping when he visits Paris next week.

In the surprise move, Macron asked German Chancellor Angela Merkel and European Commission President Jean-Claude Juncker to take part in the meeting with Xi on Tuesday, apparently to step up pressure on China during the European charm offensive.

Xi is in Italy on the first stop of a six-day trip to Europe, to be followed by Monaco and France.

Pressure from France and Germany has played a big role in shaping the EU’s new, more assertive, China policy that is being debated in Brussels, analysts say. 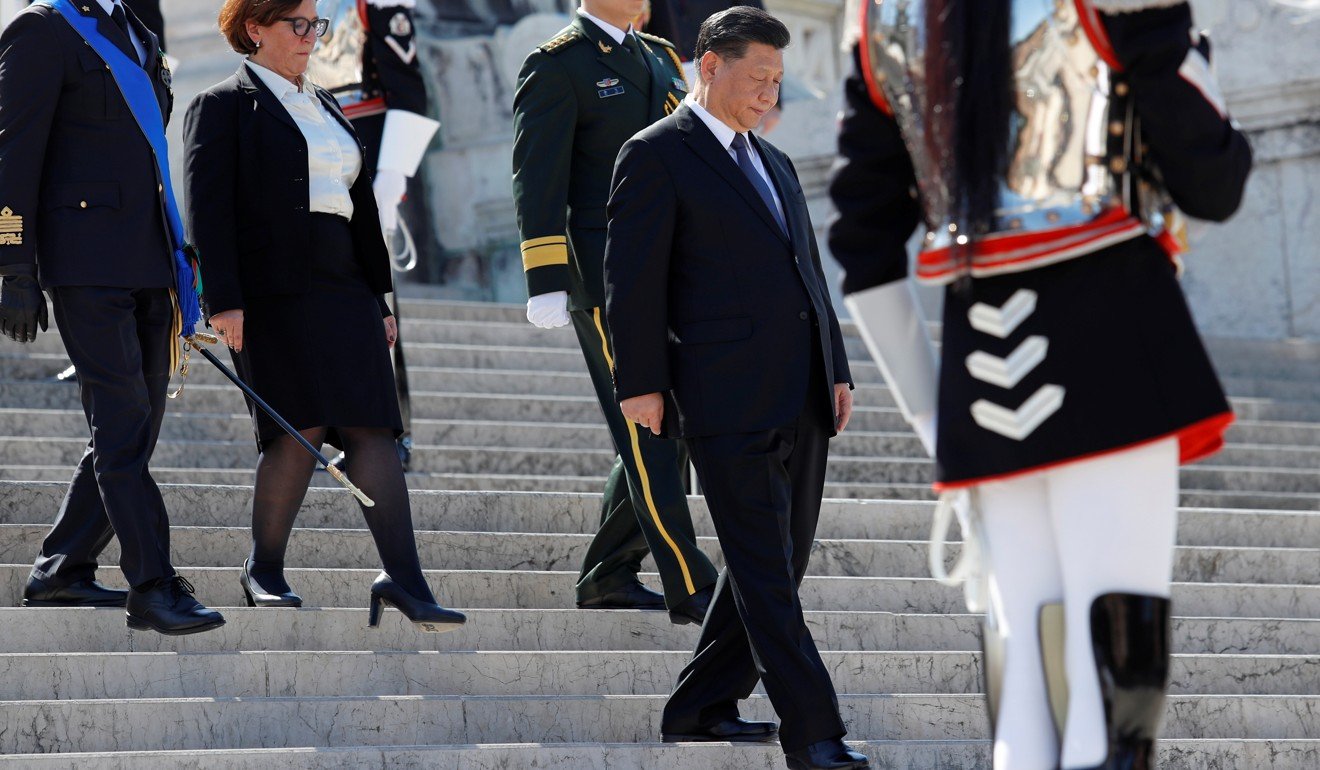 Xi Jinping attends a ceremony to pay his respects at the Tomb of the Unknown Soldier with Italian Defence Minister Elisabetta Trenta in Rome on Friday. Photo: Reuters

During the meeting with Xi, Macron plans to explain Europe’s strategy towards China as the EU moves forward with new policies on Beijing, according to a statement from the French president’s office. The meeting with Xi would focus on trade and the environment, it said.

Frans-Paul van der Putten, senior research fellow at the Clingendael Institute in The Hague, said it was a coordinated approach.

“It seems that France, Germany and the European Commission are jointly taking the lead in coordinating the EU’s China policy,” van der Putten said.

He said the Paris meeting was aimed at preparing for the upcoming EU-China summit in Brussels on April 9.

“Should the European Commission, Germany and France continue their current path towards closer coordination of their China policies, then this could strengthen the overall position of the EU with regard to China,” he said. “But that is only possible if the rest of the EU member states believe that their interests are adequately reflected in the [EU’s] policies.”

François Godement, senior adviser for Asia at the Institut Montaigne in Paris, said Macron’s unexpected call for a multilateral meeting during a bilateral state visit was “unprecedented”.

He said the move was in line with Macron’s commitment to EU integration and reform, and his support for new responses to China proposed by the European Commission.

“The meeting is also an answer to China’s very stubborn bilateralism, and is meant to demonstrate a coordinated European stand,” he added.

Godement said while France and Germany had recently made joint proposals on China at the EU level, there was always a risk that other countries did not agree with their position. “The other member states of course don’t like being put in a box,” he said.

Their strong roles might not benefit Europe in the long run, according to Bjorn Jerden, of the Swedish Institute of International Affairs.

“If the EU wants to be a major global player I can’t see how France and Germany can play the roles of individual great powers when it comes to China policy,” Jerden said.

“The whole idea with a unified stance is that EU member states should put less weight on their respective bilateral relations with Beijing. This holds for big member states as well.”

France and Germany have both lobbied hard for new EU policies to help European firms compete with China. Last month, economy ministers from France and Germany unveiled a proposal to overhaul the EU’s competition laws after Brussels blocked a merger of the railway assets of Alstom and Siemens.

In its decision to block the merger, the European Commission said it doubted China would be a competitive risk for high-speed trains in the region.

In response, Bruno Le Maire, the French finance minister, said blocking the deal had been a “political mistake” by the commission and that it would “serve China’s economic and industrial interests”.

Europe’s new China strategy was debated in Brussels on Thursday by top EU politicians. The 16-page document titled “EU-China – A Strategic Outlook” states that the 28-member bloc needs to recognize China as an economic competitor, and “needs to adapt to changing economic realities and strengthen its own domestic policies and industrial base”.

The EU for the first time labelled China as a “systemic rival” in addition to a partner for cooperation.

EU foreign policy leader Federica Mogherini told reporters the bloc’s position on China was “very complex and balanced”, but added that “China is also a competitor in certain fields and there is also a strong need from European Union member states to defend their interests, in particular when it comes to security or key infrastructure”.

Xi landed in Italy on Thursday evening, accompanied by high-level politicians including Foreign Minister Wang Yi and Yang Jiechi, China’s top ranking diplomat. The Chinese president’s first full day of events is on Friday and on Saturday he is expected to sign a number bilateral agreements with Italian Prime Minister Giuseppe Conte, including on Beijing’s “Belt and Road Initiative”.

His trip to Italy, especially a deal on the controversial trade and infrastructure initiative, has caused trepidation in Brussels. Xi will meet Monaco’s leader Prince Albert II on Sunday.