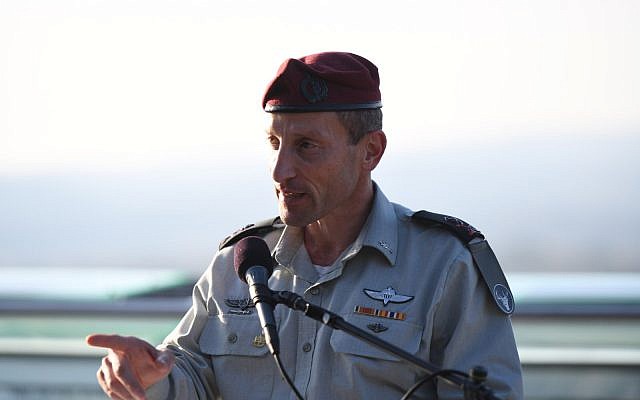 The head of IDF Northern Command, Amir Baram, speaks at a memorial ceremony for the 2006 Second Lebanon War, on June 11, 2019. (Israel Defense Forces)

The head of the IDF Northern Command on Tuesday threatened overt and covert action against the Hezbollah terror group and its home country of Lebanon, in response to its efforts to build up terrorist infrastructure along the border, in the latest of increasingly bellicose statements by senior military officers against the Iran-backed Lebanese militia.

Maj. Gen. Amir Baram accused Hezbollah of violating United Nations resolution 1701, which ended the 2006 Second Lebanon War, by “building infrastructure in the villages right here across [the border] and trying to threaten us with attack forces.”

The Northern Command chief said that in a future war against the terror group the country of Lebanon was likely to “pay a heavy price” for allowing Hezbollah to take root there.

“Hezbollah’s loyalty was and remains to the supreme leader of Iran, not to the citizens of Lebanon. As a direct result of this, the nation of Lebanon will pay a heavy price in the next campaign for cooperating with Shiite terror,” Baram said, referring to the sect of Islam practiced by Hezbollah and Iran.

Baram made his remarks at a memorial ceremony commemorating the 13th anniversary of the 2006 Second Lebanon War. His comments come days after the head of Military Intelligence boasted that Israel knew more about Hezbollah’s rocket program than its leader, Hassan Nasrallah, did. 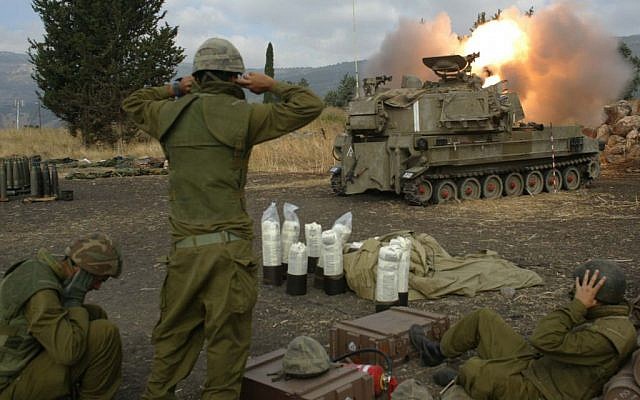 Israeli soldiers cover their ears as they fire artillery shells at southern Lebanon from outside Kiryat Shmona in northern Israel during the Second Lebanon War on July 22, 2006. (Pierre Terdjman/Flash90)

“The 13 years that have passed since the Second Lebanon War and the security stability that it brought to the region are the best evidence of the deterrence created by the war,” he said.

UN resolution 1701 called for all armed groups besides the Lebanese military to remain above the country’s Litani River. Israel maintains that Hezbollah is in constant violation of this, keeping a significant percentage of its 100,000-strong arsenal of rockets and mortar shells in southern Lebanon, as well as conducting patrols and other military activities along the border.

In late 2018 and early 2019, Israel uncovered at least six cross-border attack tunnels dug by Hezbollah from southern Lebanon into Israel. According to the army, Hezbollah had planned to use the tunnels to kidnap or kill civilians or soldiers, and to seize a slice of Israeli territory in the event of any hostilities. The peacekeeping force UNIFIL confirmed these to be a violation of resolution 1701, but did not identify Hezbollah as the group responsible for their excavation.

“Israel will not allow [Hezbollah] to fulfill its plans and the destructive ambitions that it and its patron Iran have,” Baram said. 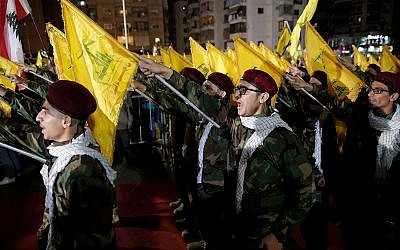 “We will continue to thwart Hezbollah’s efforts to threaten our security both overtly and covertly, as necessary. And if a war is forced upon, we will exact a heavy price from this organization and from those who provide it cover — wherever is necessary,” he said.

The Israeli military considers the Iran-backed Hezbollah terror group to be one of its most significant foes, with a rocket arsenal larger than many countries’ and ample combat experience from its years fighting in the Syrian civil war on behalf of dictator Bashar Assad.

Analysts anticipate that a future war with Hezbollah would be devastating for both Israel and Lebanon. Hezbollah’s massive arsenal of rockets and mortar shells could overwhelm the Israeli military’s air defenses, likely leading to large numbers of Israeli casualties, and the terror group’s practice of fighting from within heavily populated areas would also likely result in massive Lebanese civilian casualties.

Israel has fought two wars in Lebanon, one in 1982 against Palestinian terrorist groups, and another in 2006 against Hezbollah, as well as a number of smaller operations.

Though seen as volatile, the border has not seen significant fighting since the end of the 2006 war.