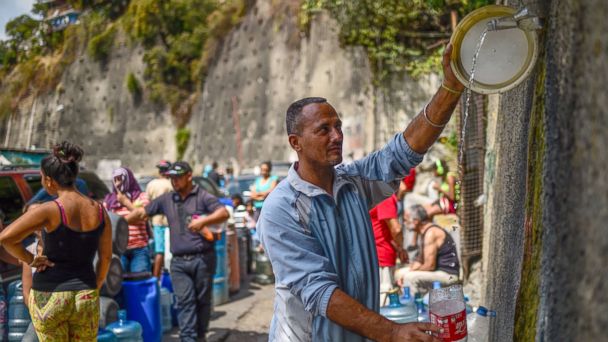 The scene in Venezuela‘s capital of Caracas is dire: a long line of people searching for clean water during the country’s daily power outages.

Children and adults alike can be seen carrying jugs as residents prepare to make a dangerous trip underground.

On Tuesday night, desperate residents climbed down a manhole that covered an emergency pipe that Venezuelans had opened to fill their buckets with clean water. Residents waited for hours just to get their share.

“Look at how we are living,” one man, Pedro Acosta, told ABC News in Spanish. “We are garbage. Kids are dying of hunger. We are an oil-rich country and look [at] us in this hole getting water.”

The crisis in Venezuela has been so severe that for several years parents have been dropping off their sick children to an orphanage.

As the country faced another day of blackouts, which have prompted water shortages and exacerbated already dire health and food crises, the staff at one orphanage visited by ABC News said it had just gotten milk.

Unfortunately, it was set to expire the next day, they said.

Crisbeili, a 6-year-old orphan there, said she had a message for the U.S.: Send water, send medicine, send anything.

Embattled Venezuelan President Nicolas Maduro remains in control and is backed by Cuban and Russian allies.

He is refusing any help from the United States. Without proof, he has accused U.S. hackers of sabotaging Venezuela’s electrical grid, crippling the nation and leading to chaos.

The U.S. recognizes Juan Guaido as Venezuela’s interim president along with more than 50 other nations.

On Thursday, the U.S. announced that all of its diplomats had left Venezuela.

“The United States government, at all levels, remains firm in its resolve and support for the people of Venezuela and Interim President Juan Guaido,” Secretary of State Mike Pompeo said in a statement Thursday. “We look forward to resuming our presence once the transition to democracy begins.”

The U.S. on Monday pointed to the blackouts, water shortages and threat of further protests when explaining its decision.

With the military still on his side, however, Maduro is showing no signs of stepping down.