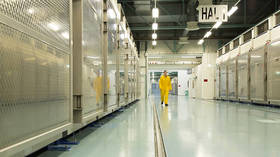 Iran has begun the process of enriching uranium to 5 percent at its Fordow nuclear facility this week, as Tehran continues to scale back its commitments under the 2015 nuclear treaty that the US withdrew from last year.

Iran’s nuclear chief Ali Akbar Salehi announced Tuesday that the country would begin to inject uranium gas into centrifuges at the underground facility, and said that it had the capacity to enrich to 20 percent “if needed.”

Iranian state media reported Wednesday that a 2,800 kg cylinder loaded with 2,000 kg of enrichment precursor uranium hexafluoride has been installed at Fordow. Under the 2015 deal, Iran committed to reducing the purity of its enriched uranium to 3 percent and enrichment was prohibited at the Fordow plant.

The process began on Wednesday “with the presence of inspectors from the International Atomic Energy Agency (IAEA),” Iranian state TV reported. UN nuclear inspectors on the ground said they would “report any relevant activities” to their headquarters in Vienna.

A US State Department spokesperson called Tehran’s plans to abandon its commitment under the nuclear deal a “big step in the wrong direction.” The US disapproval comes despite the fact that Washington precipitated the move by unilaterally pulling out of the deal last year, with President Donald Trump even branding it the “worst deal ever.”

“Thanks to US policy and its allies, Fordow will soon be back to full operation,” Iranian President Hassan Rouhani tweeted.

Speaking during a visit to China on Wednesday, French President Emmanuel Macron, who has been trying to salvage the nuclear deal, said Tehran’s latest move was “grave” and marks a “profound shift” in policy.

The Kremlin also expressed concern over Tehran’s moves, but Russian Foreign Minister Sergei Lavrov said that Moscow understood why Iran was scaling back on its 2015 commitments.