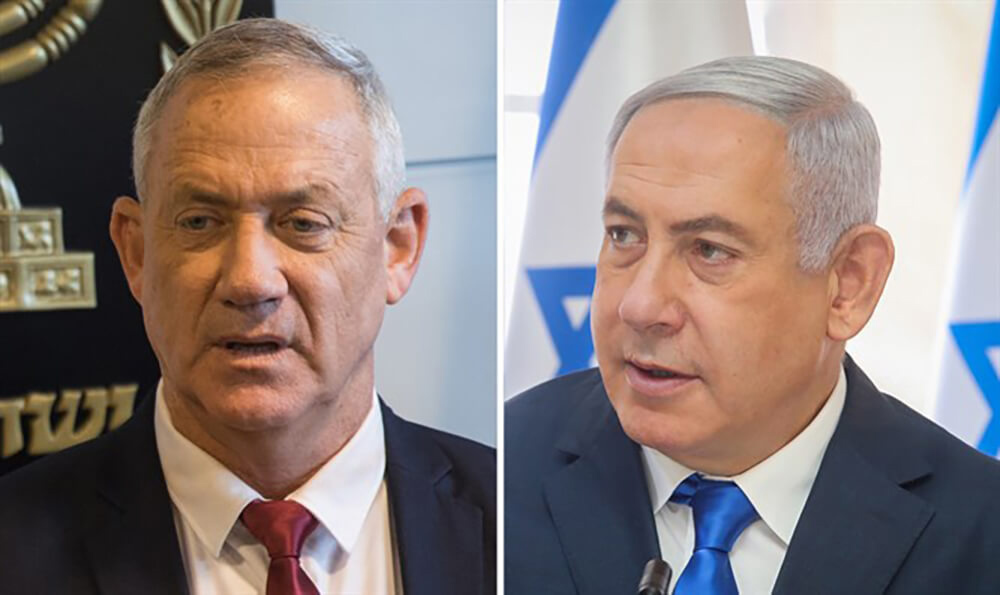 As the Jewish Voice meets its weekly publication deadline on Tuesday evening in New York City, it has been reported that the results of the much anticipated Israel elections have once again concluded in a stalemate of sorts. Israeli Prime Minister Benjamin Netanyahu has failed to secure a ruling majority in Israel’s second election of 2019, according to exit polls released by Israeli television channels on Tuesday.

According to a report on the Haaretz web site, exit polls currently indicate that Netanyahu’s Likud party will gain approximately 56 seats. The polls indicate that the largest party is Benny Gantz’s, Kachol v’Lavan. The Haaretz report indicates that since neither Netanyahu nor Gantz appear to have gained a 61-seat majority, the two are likely to enter into deliberations with Israeli President Reuven Rivlin who will determine which of them will receive the mandate to try and cobble together a governing coalition.

According to two of the polls, Kahol Lavan is leading with 32-34 Knesset seats, while Likud is projected to garner 33-30 seats.

Haaretz reported that in all three polls, the Joint List of Arab parties is projected to have garnered 15 seats, making it the third-largest party in the Knesset, while Yamina, led by Ayelet Shaked, is currently projected to win 6-7 seats, and Avigdor Lieberman’s Yisrael Beiteinu is expected to receive 8-9 seats, as of the time of publication on Tuesday evening.

As of 2:07 am Israel time, Channel 12 in Israel have updated their exit polls that show that Kahol Lavan and Likud are tied.

The leaders of the Blue and White Party including its leader, former IDF chief Benny Gantz as well as Yair Lapid, Gabi Ashkenazi and Moshe Ya’alon on Tuesday night arrived at party headquarters at the Tel Aviv Port, according to an INN report.

INN reported that Gantz said in his remarks, “We will wait for the true results, but it seems as though we have accomplished the mission, and no less important–we accomplished it in our way. Blue and White was and remains a major and central force in the Israeli political arena.”

“As we said, we will now patiently wait for the real results. However, we can say that it appears as though Netanyahu was unsuccessful in his mission. We, on the other hand, proved that the idea called ‘Blue and White’–a venture we started a little over six months ago–has succeeded, in a big way, and is here to stay.”

Some Netanyahu supporters gathered at the Likud Party headquarters in Tel Aviv on Tuesday night. They reacted to the initial exit polls by waving banners emblazoned not with “Netanyahu,” but instead with “Trump.”

Throughout his campaign, the Prime Minister boasted about his tight relationship with President Trump, who is quite popular in Israel. And billboards across the country are plastered with photographs of the two of them together.

Neither Likud nor Kachol v’Lavan appears able to form a majority coalition without the support of Avigdor Liberman, leader of the midsize Yisrael Beitenu party, according to a report on World Israel News.

In a speech to his supporters, Liberman said the only choice is for the two large parties to join him in a broad, secular coalition that would not be subject to the demands of Charedi parties such as Shas and United Torah Judaism.

Liberman’s call would set the stage for complicated negotiations, according to the WIN report.

In the closing days of his campaign, Netanyahu vowed to annex large parts of Judea and Samaria, which Israel liberated in the aftermath of defeating four Arab armies in 1967’s Six-Day War. The Palestinians, who in over 70 years have yet to create a viable independent state, demand that Israel cede large swaths of that territory, as was reported on the WIN web site.

No serious peace talks have taken place since 2009, with Palestinian rejectionism remaining the hallmark of Mahmoud Abbas’ regime.

Israeli President Reuven Rivlin’s office said Tuesday that his nomination of a candidate to form the next government would be guided in part by the need to avoid a third election, after two votes in five months, as was reported by World Israel News. Rivlin said he would meet with party leaders “after he receives a clear picture of the results, and as soon as possible.”

Ayman Odeh, the leader of the Arab Joint List, told Israeli media that if the final results match the exit polls, Arab voters will have “prevented Netanyahu from forming a government.”

Tazpit Press Service reported earlier on Tuesday that Prime Minister Netanyahu’s Facebook chatbot was suspended on election day after it published poll results. Publishing polling results in the days prior to elections day is illegal in Israel.

A Netanyahu bot was suspended last week after it published “incitement.”

“We work with election committees around the world to help maintain the purity of elections. Our policy specifically states that developers are required to comply with all applicable laws in the country where their app is available. Therefore, we have suspended the bot activity in violation of local law until the polls close,” Facebook stated. Netanyahu accused Facebook of buckling to left-wing pressure, according to the TPS report.

Several parties claimed they have documented attempts at elections fraud at various locations across the country, and a few voting stations were shut down following scuffles at the site, as was reported by TPS.

Political parties across the spectrum on Tuesday submitted several complaints to the police and the Central Elections Committee following claims that they have exposed attempts to influence the outcome of the elections in a fraudulent fashion.

TPS reported that in Jerusalem, a 17-year-old was arrested after it was reported that he attempted to vote using an ID card that did not belong to him. The voting age in Israel is 18.

The police were alerted to the Arab town of Yarka in the north after a voter was caught trying to cast several votes at once when he was entitled to only one. At other locations, parties claimed that representatives of other political bodies attempted to limit the votes for them by hiding the ballots with their party name, as was reported by TPS.

All parties are claiming that the turnout of their supporters is low in comparison to their political rivals, a ploy to motivate their supports to go out and vote.

The voting turnout at 2 o’clock was 36.5%, compared to the slightly lower 35.8% at the same time of day in the April elections.

Some 130,000 chose to spend the day hiking and visiting nature reserves throughout the country. Malls reported they were full of shoppers who took the day to shop for the upcoming holiday. Many others chose to soak in the last rays of sun at the beach, before the summer ends, according to the TPS report.