Israel’s defense minister Avigdor Liberman issued a stark threat to Iran through Saudi Arabia’s Elaph news outlet on Thursday, warning the Islamic regime that its days are numbered and asserting that if it were to attack Tel Aviv, Israel would retaliate with an attack against Tehran.

“These are the final days of the Iranian regime,” Liberman said during an interview with the London-based news portal. “Israel doesn’t want war…but if Iran attacks Tel Aviv, we will hit Tehran”.

“Every outpost in which we see Iran positioning militarily in Syria, we will destroy, and we will not allow this no matter what the price,” he added.

Liberman’s interview with the Saudi-owned outlet came as tensions brew between Iran and its main rivals Israel and Saudi Arabia on multiple fronts, with analysts warning that the Middle East power players could be entering an escalatory spiral of proxy fights that threatens to destabilize the entire region.

While Saudi Arabia and Israel have no formal diplomatic relations, behind the scenes improvements in their ties have accelerated in recent years over a multitude of shared interests — prime among them stemming Iran’s growing influence in the region.

Both countries see Iran as their biggest outside threat and the United States as their key ally, and both see danger from armed Islamist extremists. 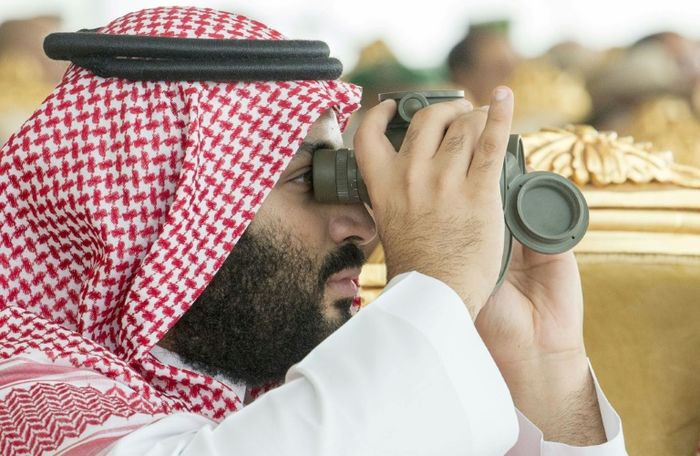 Saudi Crown Prince Mohammad Bin Salman has presented Shiite-dominated Iran as seeking control of the whole region and earlier this month gave unprecedented recognition to Israel’s “right” to existwhile extolling the possibility of future cooperation with the Jewish state.

The powerful Crown Prince previously warned that if Iran were to ever develop a nuclear bomb his country would quickly follow suit and said that Saudi Arabia was not prepared to accept any of the risks posed by the 2015 Iran nuclear deal.

Israel has expressed similar concerns over the accord, the fate of which is to be decided by US President Donald Trump in May, with Prime Minister Benjamin Netanyahu urging Washington to either “fix it or nix it.”

“Friendship with the unbelievers brings misery to Muslims, like the friendship some Muslim states have with the Zionist regime, exchanging kind words and establishing economic or political relations,” Khamenei wrote in a tweet. In this picture released by the office of the Iranian supreme leader on Wednesday, March 21, 2018, Supreme Leader Ayatollah Ali Khamenei waves to his supporters during his visit to Mashhad, 900 km (540 miles) east of Tehran, Iran

Office of the Iranian Supreme Leader via AP

He called on Muslims to unite against American “bullying”, slamming countries for aligning with the United States without explicitly naming them.

“Unwise and reactionary governments of certain countries have entered into wars against other countries,” Khamenei said. “Look at the calamity Yemenis are afflicted with! Their wedding celebrations turn into mourning ceremonies: People are bombarded on streets, at bazaars and mosques.”

Iran and Saudi Arabia are backing opposite sides of a war raging in Yemen.

Liberman is currently in Washington D.C. where he is set to meet his US counterpart, Secretary of Defense Jim Mattis, and US National Security Adviser John Bolton, with Iran and Syria expected to dominate the security chiefs’ talks.

Israel did not claim responsibility, but the raid was widely seen as its first direct attack on Iranian assets and a worrying sign of how Syria’s seven-year conflict could escalate into a wider regional war.

Iran has vowed on several occasions to retaliate for the deadly strike on its forces. Liberman’s interview, while rare, is not the first time a senior Israeli official has taken to Elaph — which runs interviews with Israeli officials for the Arabic-speaking word — to warn of the Iranian threat.

Israel Defense Force (IDF) chief-of-staff Lt. Gen. Gadi Eizenkot became the first senior Israeli military official to be interviewed by the Saudi-owned publication in January 2016, telling Elaph that there is a “complete consensus” between Israel and Saudi Arabia on the issue of mutual arch-rival Iran, and that Jerusalem is ready to share intelligence with one of the world’s most powerful Muslim states.

Israeli Intelligence Minister Yisrael Katz was interviewed by Elaph a month later, during which he threatened to send Iran’s Lebanese proxy Hezbollah “back to the stone age” if they dared to fire missiles at Israel.