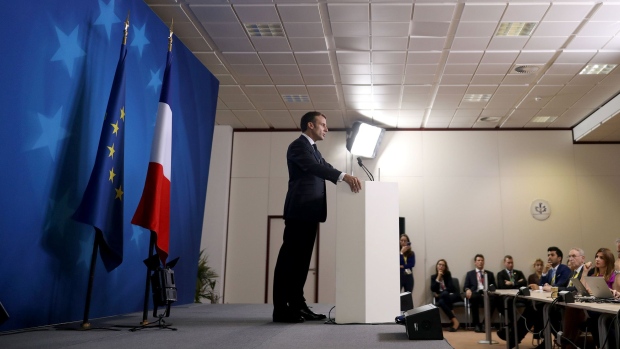 (Bloomberg) — French President Emmanuel Macron blocked the European Union’s attempt to delay Brexit for three months, raising the prospect the U.K. might not know whether it will get an extension until just hours before it is scheduled to be ejected on Oct. 31, even without a deal.

At a meeting in Brussels on Friday morning, diplomats from the EU’s 27 remaining countries deferred a decision on the postponement. While none of them want to be been interfering in the U.K.‘s domestic politics, France is at loggerheads with the others.

Macron wants to grant a delay until Nov. 30, or even sooner, to put pressure on the House of Commons to back Boris Johnson’s deal. Other EU governments see that as too much of a gamble because it could lead to a no-deal Brexit. They are pushing to postpone Brexit until Jan. 31 to allow time for a general election.

On Thursday, Johnson said he will seek an election on Dec. 12. But to hold it, he needs the support of two-thirds of members of Parliament, and the opposition Labour party has said it will block it.

The diplomats have given themselves until Tuesday to make a decision. If they don’t, the EU could convene an emergency summit of EU leaders that would leave the U.K. hanging as time ticks down toward the country’s scheduled departure. Without a deal or an extension, the U.K. would crash out of the bloc without the economic safety net of an agreement at the end of the month.

No EU government will refuse a delay of some sort — the question is when they will decide to grant it, officials said.

To contact the editors responsible for this story: Ben Sills at bsills@bloomberg.net, Edward Evans.