Tapachula, Mexico (CNN )Honduran migrants in a massive caravan surged across a bridge leading to Mexico on Friday before they were halted in a chaotic confrontation with a phalanx of Mexican police in riot gear.

Chanting and cheering migrants pushed through or climbed over a steel gate until police threw tear gas and smoke canisters and pushed the migrants back. Video showed coughing and weeping migrants collapsed on the bridge. Several police and an undetermined number of migrants were injured.

As night fell, thousands of migrants remained packed together and exposed to the elements on the Suchiate River bridge connecting Tecun Uman, Guatemala, and Tapachula, Mexico, according to CNN crews on the ground. 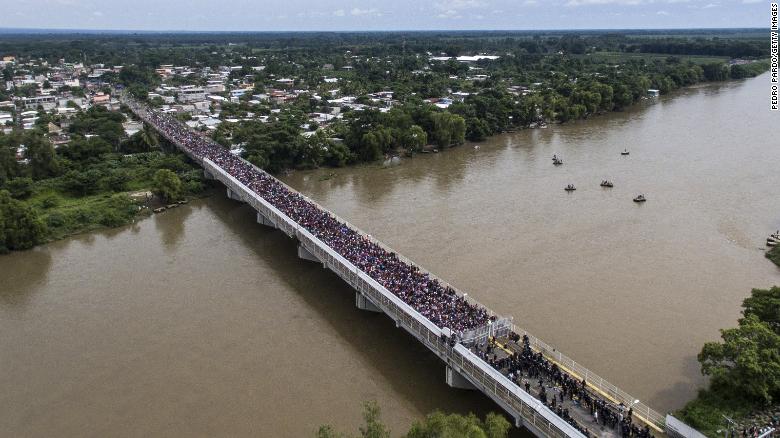 As the migrants formed into lines, Mexican authorities allowed a trickle of them, starting with women and children, to pass through gates and board buses for refugee camps.

It was unclear how many migrants would cross the border and how long that process would take. Mexican authorities have said they’d allow migrants to enter the country if they have valid visas or meet other requirements.

The caravan formed last Saturday in San Pedro Sula, Honduras, and arrived in Guatemala on Monday. Migrants in the group told CNN en Español they were bound for the United States, seeking work and fleeing political corruption and violence.

Leaders throughout the region have publicly urged them for days to turn back.

Pompeo: ‘This is an organized effort’ 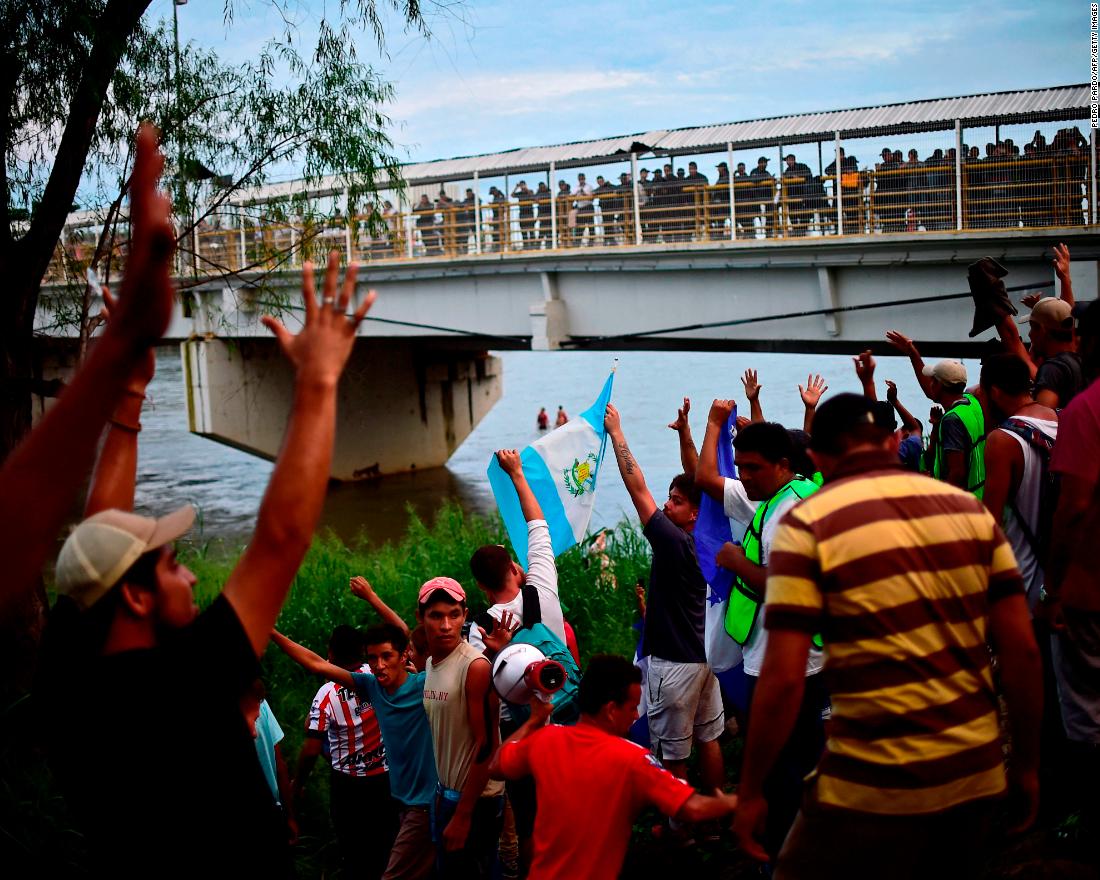 Honduran migrants from a caravan to the United States who have already reached Mexican soil cheer at the rest of the group still waiting to cross at the Guatemala-Mexico border bridge in Ciudad Hidalgo, Mexico, on Saturday, October 20

Four Mexican police officers were injured in the standoff at the Mexican border, US Secretary of State Mike Pompeo said Friday.

Speaking to reporters on a tarmac in Mexico City, where he’d been meeting with leaders about the caravan and other matters, Pompeo accused the caravan of using women and children “as shields as they make their way through.”

“This is an organized effort to come through and violate the sovereignty of Mexico,” Pompeo said. “We’re prepared to do all that we can to support the decisions that Mexico makes about how they’re going to address this very serious and important issue to their country.”

Pompeo said he had a “good conversation” with Mexican President Enrique Peña Nieto and that the two countries are jointly focused on the caravan issue, but “the Mexican government is making all the decisions on how to address this.”

“They are fully engaged. They sent 500 ‘federales’ down to the southern border,” Pompeo said, noting that he wanted to “express his sympathy” for the injured officers.

“That’s evidence of what this really is,” he said.

Peña Nieto called the confrontation a “unique incident,” saying the migrants did not follow the protocols that Mexican immigration officials put in place in anticipation of the caravan. He added that some migrants “assaulted and even injured” a number of unarmed members of the Mexican police before they could contain the violence.

“Mexico won’t allow anyone entering its territory in an erratic way and much less a violent way,” he said Friday night in a video statement released on Twitter.

“Mexico maintains its willingness to support migrants who decide to enter our country while respecting our laws,” he said.

US President Donald Trump, who’s been criticizing the caravan with fiery tweets all week, reiterated his threat Friday that if Mexico doesn’t stop the migrants, he’ll take more drastic action.

Clash on the bride

Friday morning, members of the caravan gathered in the border city of Tecun Uman. They waited in sweltering heat for hours for others to arrive, packing streets for blocks on end.

They they streamed through gates on the Guatemalan side of the border around 12 p.m. Friday (2 p.m. ET), cheering and chanting as they marched. Celebratory air horns blared as they headed toward Mexico’s port of entry.

When they reached a padlocked steel fence near the Mexican side of the bridge, the sheer numbers of the migrants allowed them to break through.

Mexican police pushed them back. Hundreds of Mexican Federal Police sealed the border as drones and helicopters hovered above the crowd.

At least a dozen migrants jumped into the river. It wasn’t known whether they were trying to swim across to the Mexican side of border, go back to Guatemala or just get relief from the crowds on the bridge.

Some of the migrants on the bridge told CNN they joined the caravan because they were desperate for work and had no other choice.

Mexican officials have said people seeking asylum will be processed at Mexico’s southern border. But it’s unclear what will happen next.

Will they reach the US border?

Mexican authorities haven’t said whether anyone from the caravan will be permitted to travel to the US border.

They’ve previously outlined how they planned to respond to the group, stating:

• Anyone with a valid visa will be able to enter and move freely.

• Anyone who wants to be recognized as a refugee or as a beneficiary of “complementary protection measures” must do so individually. Those who do so will be held “at a migratory station” for up to 45 business days.

• Anyone who enters “in an irregular manner” will be “rescued and subject to an administrative procedure and, where appropriate, will be returned to their country of origin in a safe and orderly manner.”

This appears to be a shift from previous policies, in which humanitarian or transit visas were issued, and migrants were given the option of continuing their journey north if they didn’t want to seek asylum in Mexico.

This past spring, when another caravan of Central American migrants crossed into Mexico, such policies allowed that group to make it to the US border.

This caravan’s formation comes just weeks before high-stakes midterm elections in the United States, in which many Republican candidates have been echoing the President’s messaging about boosting border security and cracking down on illegal immigration.

Trump has pointed to the caravan as a key issue in the upcoming election, describing the group’s approach as an assault on the US border. Immigrant rights advocates have accused his administration of trying to create a crisis to motivate his base.

Honduran President Juan Orlando Hernandez planned to meet with his Guatemalan counterpart, Jimmy Morales, Saturday morning to work on “implementing a strategy and logistics for the return of Honduran migrants,” the Guatemalan government said Friday on its official Twitter account.

Hernandez also sought permission from Guatemala to send Civil Protection personnel to assist Honduran migrants inside Guatemala on Friday, according to several posts on his official Twitter account.

In addition, Hernandez requested authorization to “hire ground transportation for those wishing to return, even airlifting special cases of women, children, the elderly and sick,” he said, thanking the Guatemalan government for “all the attention given to our Honduran brothers.”