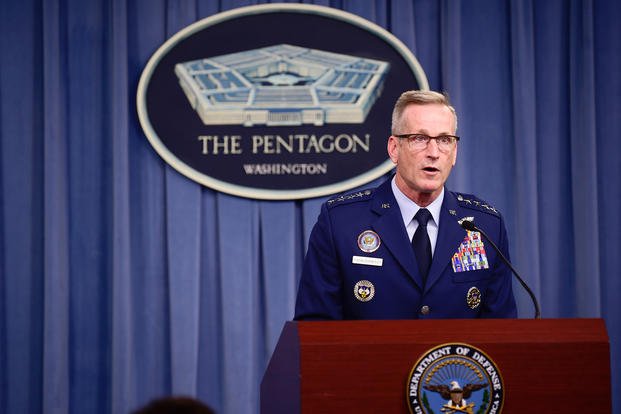 The general in charge of U.S. troops on the southern border said Monday there is no telling how long they will have to remain in support of the law enforcement effort against illegal immigration.

In an address and follow-up question-and-answer session at the Center for Strategic and International Studies, O’Shaughnessy was not pressed to expand on his remark about the U.S. troop presence on the border.

He also gave no indication of whether the Defense Department is going ahead with the plan to house up to 1,400 migrant children at Fort Sill, Oklahoma, to ease the strain on overcrowded facilities at the border.

Over the weekend, there were more demonstrations at Fort Sill’s gates against housing migrant children on the base, including some protesters who are descendants of Japanese-Americans detained there during World War II, local news outlets reported.

Policy decisions dealing with the border crisis are not his to make, O’Shaughnessy said.

“We’re not the lead federal agency” in responding to the flow north of asylum seekers and “don’t want to be,” he said of the military’s role.

O’Shaughnessy said a mix of active-duty and National Guard troops continue to support the Customs and Border Protection and Department of Homeland Security mission at the border.

Last week, Acting Defense Secretary Richard V. Spencer approved sending 2,100 more troops to the border in a move that would eventually bring the total there to more than 7,000.

About 1,000 of the 2,100 additional troops would come from the Texas National Guard; the rest would be active duty, according to a Pentagon news release.

Currently, about 5,000 military personnel are deployed for the border mission — about 3,000 active duty and 2,000 National Guard, according to the Pentagon.

— Richard Sisk can be reached at Richard.Sisk@Military.com.