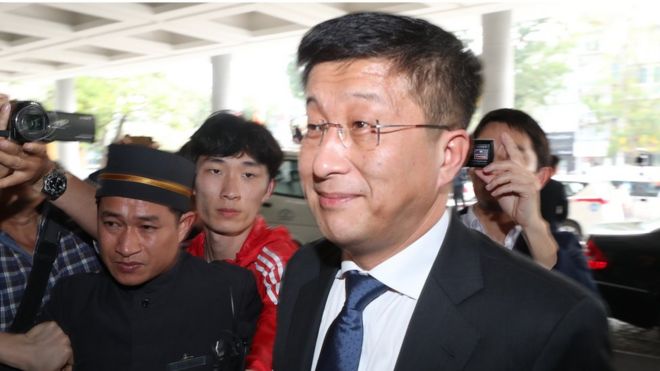 It is being reported across international media that North Korea’s nuclear envoy has been executed as part of a purge of officials involved in a failed summit between the US and North Korea.

But there is a reason we treat reports about North Korean officials being executed with extreme caution. The claims are incredibly difficult to verify and they are very often wrong.

Both the South Korean media and the government in Seoul have reported on purges in the past – only for the “executed” officials to turn up a few weeks later looking alive and well next to the North Korean leader Kim Jong-un.

On this occasion, a single anonymous source has told a newspaper in Seoul that Kim Hyok-chol, the former North Korean envoy to the US and a key figure in talks ahead of the summit between Kim Jong-un and Donald Trump in Hanoi, was executed at an airport in Pyongyang.

The source claims that he was punished alongside four other foreign ministry executives. They were all charged with spying for the US and poorly reporting on the negotiations without properly grasping US intentions.

It’s also alleged that Kim Yong-chol, the North Korean leader’s right hand man who was despatched to Washington to help arrange the Hanoi summit, has now been sent to a labour and re-education camp near the Chinese border.

The report is plausible. These key officials have been out of the public eye since the summit in February. Kim Jong-un is clearly angry at the outcome of his talks with Donald Trump and may have been looking for someone to blame.

His diplomatic gamble with the US has so far failed to yield results, which puts him under pressure. Strict economic sanctions remain in place. Discussions between Washington and Pyongyang have stalled. In Pyongyang, the decision may have been taken that someone has to pay the price.

It’s worth noting that the state’s official Rodong Sinmun newspaper called out unspecified “betrayers” and “turncoats” in an editorial earlier this week. It said that those who “committed anti-party” and “anti-revolutionary actions” would come under the “stern judgement of the revolution”. No names have been given, but the message is clear.

Kim Jong-un has carried out executions in the past. In 2013, Mr Kim’s powerful uncle, Jang Song-thaek, was executed for treason. South Korean intelligence services announced his death days before it was declared by the North.

The most (in)famous of these was the alleged death of singer Hyon Song-wol. In 2013, the same South Korean newspaper announced that she had been shot in a “hail of machine gun fire while members of her orchestra looked on”.

Last year, Hyon Song-wol swept into Seoul leading a visiting North Korean delegation ahead of the Winter Olympics looking rather glamorous in a fur coat and very much alive. She is now one of the most powerful women in North Korea.

South Korean intelligence officials said in 2016 that the former military chief Ri Yong-gil had been executed for corruption. He appeared in state media a few months later – having been given a promotion.

Sources within North Korea can often be a reporter’s most valued asset, but also one of our most troublesome. We have no way of checking their claims.

Intelligence services in Seoul and in the US are trying to establish the fate of Kim Hyok-chol, but unless Pyongyang decides to announce it themselves, we may never know.