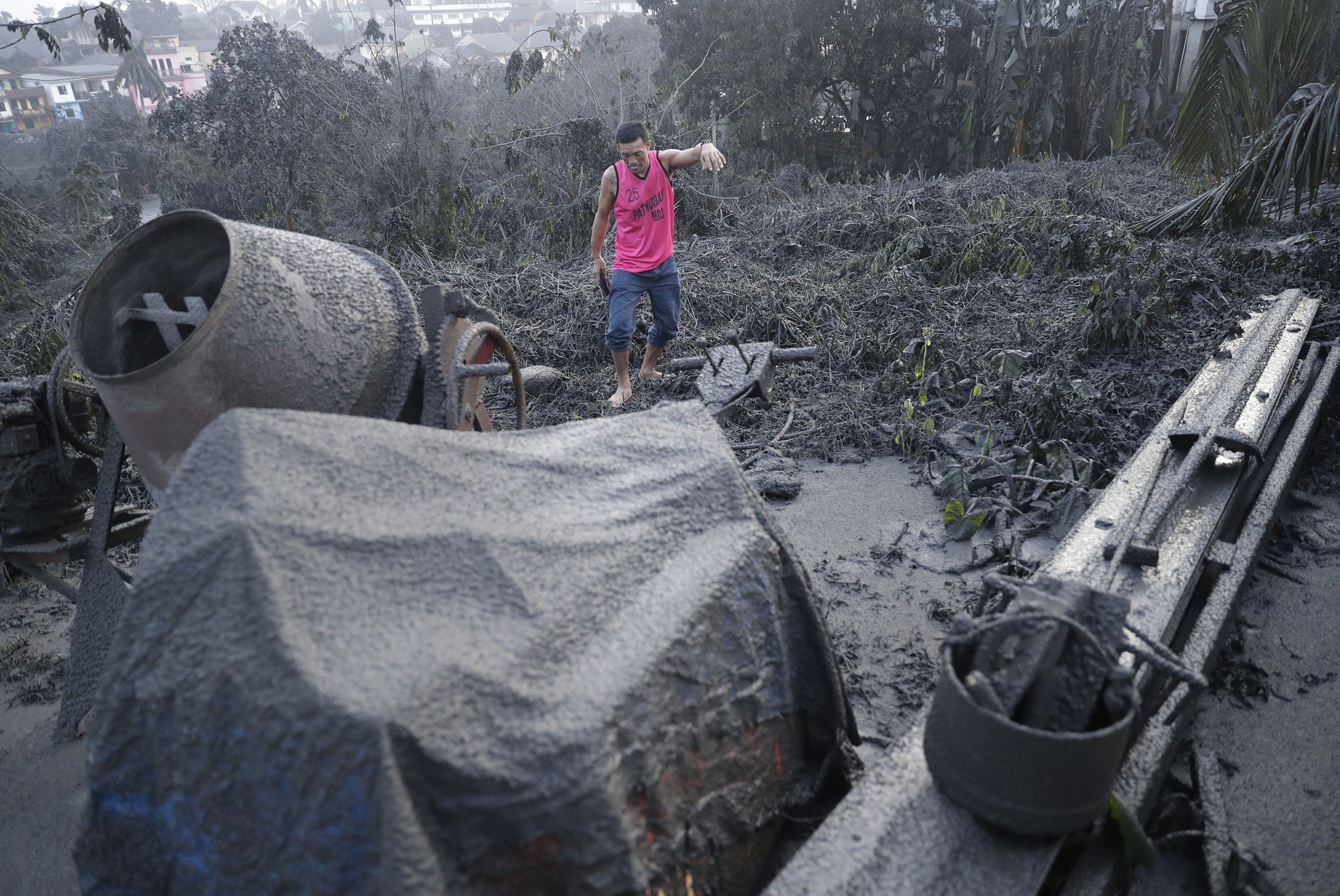 A mass evacuation is underway in the Philippines, where an erupting volcano 65km south of the capital has triggered some 75 earthquakes and on Monday spewed lava and “ballistic fragments”, forcing the nation’s financial markets to suspend trading and Manila airport to close.

A “hazardous explosive eruption is possible within hours to days”, the Philippine Institute of Volcanology and Seismology said on Monday. Thousands of people have been evacuated since late Sunday, with plans to move as many as 200,000 people. Officials ordered schools and government offices shut, and advised private businesses to do the same. However, some residents refused to leave their homes and farms, officials said.

“We have a problem, our people are panicking due to the volcano because they want to save their livelihood, their pigs and herds of cows,” Mayor Wilson Maralit of Balete said. “We’re trying to stop them from returning and warning that the volcano can explode again anytime and hit them.”

Maralit, whose town lies along the coastline of Taal Lake surrounding the erupting volcano, appealed for troops and additional police to be deployed to stop distraught residents from sneaking back to their high-risk coastal villages.

“You could not sleep anymore, because every time you closed your eyes the house would shake,” restaurant owner Lia Monteverde said, recalling quakes striking minutes apart.“All of us didn’t sleep at all. We just prepared to leave.”

Weak lava fountaining, accompanied by thunder and flashes of lightning, indicated intense activity at the main crater of the Taal Volcano, the volcanology agency said. Dozens of towns and urban areas all the way to Metro Manila, including the main business district of Makati City, are enduring ashfall and volcanic particles up to 2.5 inches in diameter. “It’s been endless evacuation since last night,” said Lita Laverinto, an operations officer with the Office of Civil Defence in Calabarzon. “We need masks; our volunteers and respondents who are directing rescues and evacuation really need them.”

Manila’s international airport, the country’s main gateway, remains closed until the airspace and runways are clear of volcanic debris, authorities said in a statement.

About 200 flights were canceled, affecting about 60,000 passengers, according to a statement from Cebu Air and Philippine Airlines. The airport may resume partial operations on Monday, it’s General Manager Ed Monreal told local radio DZMM.

Bank of the Philippine Islands, the nation’s oldest lender, suspended operations in “badly affected areas”, mostly in Batangas and Cavite, and allowed some staff in less affected areas to work remotely, according to Owen Cammayo, vice-president of corporate communications. The bank will decide later today if it will close early, he said.

More than 20,000 residents from 14 towns have been moved to some 73 evacuation centers in the provinces of Batangas and Cavite, as of 6 am on Monday. Hundreds of thousands more may need to be evacuated if eruptions in the main crater cause surrounding craters to explode.

“I’m afraid that it might erupt… but I’ll leave it to fate. I just have to pray,” said Eduardo Carino, who works in a hotel near the volcano.

Taal is considered the second-most active volcano in the Philippines. Located in the middle of a lake less than 10km inland of Balayan Bay on the island of Luzon, Taal volcano has some 30 active craters, according to Batangas province Vice Governor Mark Leviste.

“Right now, we are witnessing a vertical eruption, and thanks to God we are just experiencing ashfall,” Leviste told DZBB radio Sunday. “But if this turns into a horizontal explosion, this could affect the mainland.”

A change of wind direction means ash is blowing over municipalities not included in earlier emergency plans, swelling the number of communities affected.

“Our problem is access to affected areas,” said Jovener Dupilas, an information officer with the Office of Civil Defence. “The ash fall is so thick and heavy that visibility is poor and some trees even fell.”

In metropolitan Manila, traffic is lighter than usual, indicating that while many private companies haven’t suspended work, many employees have stayed home anyway.

The Philippines is one of the most disaster-prone countries in the world. Battered by about 20 typhoons annually, the country also sits on the “Pacific Ring of Fire”, exposing it to earthquakes and volcanic eruptions.

Between 2000 and 2016, natural disasters in the Philippines caused more than 23,000 deaths and affected 125 million people, according to the Asian Development Bank. The socioeconomic damage was about US$20 billion with average annual damage estimated at US$1.2 billion, it said.