The Oval Office photograph, obtained by the Washington Examiner, is circulating among Trump allies who consider it evidence that the alleged whistleblower is biased against Trump and had partisan motivations when he filed an Aug. 12 complaint that sparked impeachment proceedings.

In the photograph, a smiling Ciaramella, then Ukraine director on the National Security Council at the White House, is shown shaking Obama’s hand. They are standing in front of a portrait of Abraham Lincoln by George Henry Story. 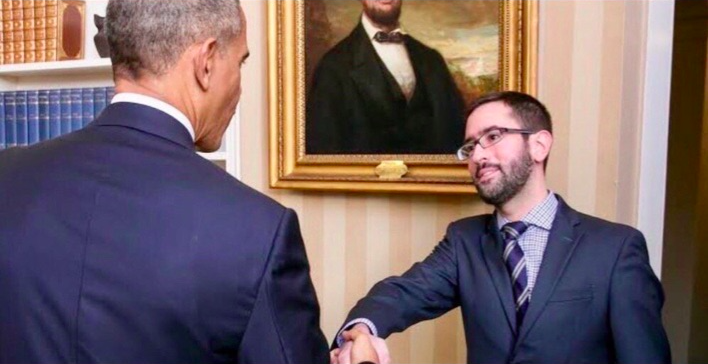 Ukraine specialist Eric Ciaramella poses for a photo with former President Barack Obama at the White House. The photo was published on the website for a friend’s 2018 wedding.

A Republican close to the White House said the photo was evidence Ciaramella supported Obama and its selection for the wedding website indicated he considered the Oval Office image a “glamour shot.” “This photo confirms that career intelligence and foreign service officials serving at the highest ranks of the Trump White House have their own agenda and their own policy viewpoints,” the Republican source said.

The website for the September 2018 wedding of Mat Calabro, a Connecticut high school friend of Ciaramella, is now defunct. The two friends traveled through Central and Eastern Europe together in the summer of 2005, and Ciaramella was a best man at Calabro’s wedding in Newport, Rhode Island.

An Obama photograph was prized by White House staff during his time in office. When aides departed the NSC, they were given the chance to have a photo with the president, according to former aides. Staff still at the council when Obama left office were given the chance to get a photograph. It appears this was the occasion for Ciaramella to secure his keepsake image. Trump discontinued the tradition of routinely posing with departing staff.

Ciaramella, 33, is a career CIA analyst who is now a deputy national intelligence officer for Russia and Eurasia on the National Intelligence Council under the director of national intelligence. From 2015, Ciaramella was the NSC’s Ukraine director, the post currently occupied by Lt. Col. Alexander Vindman, who has testified against Trump and with whom Ciaramella still has professional dealings. The Washington Post has suggested that Vindman spoke to the whistleblower about the July 25 telephone call between Trump and Ukrainian President Volodymyr Zelensky.

Early in the Trump administration, Ciaramella was briefly acting NSC senior director for European and Russian affairs, while still Ukraine director, before Fiona Hill took over. During recent congressional testimony, Hill was unable to recall Ciaramella’s name. Ciaramella was cited in a key passage of special counsel Robert Mueller’s report in connection with the meeting between Trump and Russian officials in the Oval Office the day after James Comey was fired as FBI director.

The CIA officer worked with Joe Biden, then vice president, on Ukraine policy and was Biden’s guest at a State Department banquet in October 2016. Ciaramella finished his White House assignment as assistant to national security adviser H.R. McMaster in June 2017.

Before he left the White House, Ciaramella came under attack from prominent right-wing figures on social media who believed he opposed Trump. Some White House officials suspected him of leaking, but one person familiar with his work under Trump called Ciaramella a “nonpartisan patriot” who was unfairly smeared by “wack jobs.”

A whistleblower submitted a complaint to the Intelligence Community’s inspector general on Aug. 12 that said Trump pressed Zelensky during the July 25 phone call to investigate Biden and his son, Hunter.

Republicans, led by Trump, are focused on the whistleblower amid a second week of televised impeachment hearings. They claim that the whistleblower coordinated his efforts with Schiff’s staff, which he contacted for guidance before filing the complaint.

The top Republican on the House Intelligence Committee, Rep. Devin Nunes, said during a Tuesday hearing that Democrats flip-flopped on whether the whistleblower should testify. “It’s as if the Democrats put the whistleblower in their own witness protection program,” he said.

Mark Zaid, an attorney for the whistleblower, recently told the Washington Examiner that one potentially favorable outcome would be similar to former FBI official Mark Felt, who disclosed he was “Deep Throat” in his ’90s. Felt had been named in press accounts before Richard Nixon’s resignation, but a lack of confirmation kept people guessing.

The whistleblower’s legal team has declined to confirm or deny reports purporting to name its client. The attorneys and Democrats say his identity is irrelevant. The whistleblower had only secondhand knowledge of details, whereas lawmakers now are questioning witnesses with firsthand knowledge. Republicans believe it is important to establish the origins of the complaint against Trump.

Ciaramella and Calabro did not respond to emails seeking comment.