It’s an unprecedented outbreak of a virus that’s deadly to pigs. 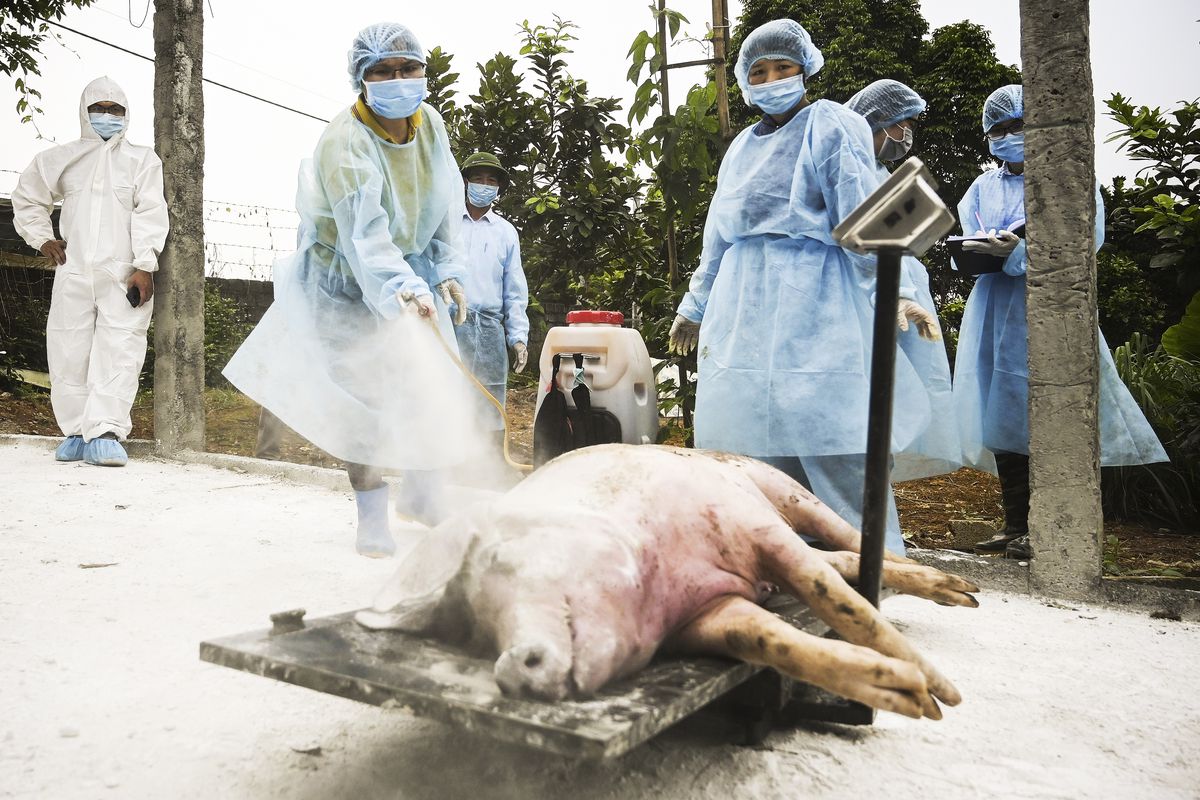 Health officials in Hanoi, Vietnam, spray disinfectant on a dead pig at a farm before burying it in an isolated quarantined pit to stop the spread of African swine fever. Manan VatsyanyanaAFP/Getty Images

An outbreak of African swine fever, a highly contagious disease that’s been called “pig Ebola,” is ravaging Asia’s pig industry with no signs of letting up.

The current outbreak of the virus, which kills almost all animals it infects, began in China in August. Since then, some 22 percent of the country’s pig herd has been lost to the disease and to culling, Christine McCracken, an animal protein expert at Rabobank, told Vox.

African swine fever is also now spreading in several countries neighboring China, including Mongolia, Russia, Cambodia, and Vietnam. The map below shows current outbreaks in Asia, as reported to the World Organization for Animal Health, or OIE.

The disease, which was discovered a century ago in Kenya, is particularly deadly to pigs because it spreads easily and there is no treatment or vaccine. The only way for pig producers to prevent it is to kill all animals that have been infected or potentially exposed, or to put strict biosecurity measures in place.

Officials in China have tried in vain to get the outbreak under control to protect the country’s roughly 440 million pigs, which make up more than half of all pigs on earth. So far, it says it has culled 1.2 million pigs, putting thousands of small producers out of business. McCracken and others say that is a significant underestimate.

By the end of the year, she estimates China may lose as many as 200 million pigs. That’s an astonishingly high number, considering that a single pig can produce 200 pounds of food. It’s also remarkable when you compare it to the 250 million poultry in 63 countries that were culled following the outbreak of avian flu in China in 1996.

This African swine fever outbreak, in other words, is much worse than that avian flu outbreak in terms of livestock losses. “It’s historic; there’s never been anything like this in the history of modern animal production,” said McCracken. “And it’s a frightening situation only in that there is no current control.”

Though China is the epicenter and the worst-affected country, Vietnam has also been forced to cull 2 million of its 30 million pigs, according to Reuters. And tourists have brought the disease into several countries in Europe, including Poland and Romania, where it’s spreading among wild boar.

“This is the biggest animal disease outbreak we’ve ever had on the planet,” Dirk Pfeiffer, a veterinary epidemiologist at City University of Hong Kong and expert on African swine fever, told the Guardian. “It makes the foot and mouth disease and BSE [mad cow disease] outbreaks pale in comparison to the damage that is being done.”

African swine fever can’t be transmitted from pigs to humans and is not a food safety issue. But its recent spread in Asia is becoming a major economic problem for the region, where thousands of farmers raise pigs in their backyard and rely on them for their livelihood. “It’s a pretty fragile industry with a lot of potential risk,” McCracken said.

The United Nations Food and Agriculture Organization has said the disease could continue to spread across Southeast Asia. Thailand is now on “red alert,” the Guardian reported.

Before the current outbreak, veterinarians had been warning that the virus was a significant threat to the global pig industry. “Vaccine development against ASF has been hampered by large gaps in knowledge concerning ASFV infection and immunity,” according to a March 2018 article in The Veterinary Journal.

The attempts to control the current outbreak in Asia have failed for a number of reasons, including “rampant smuggling of pork products,” according to researchers writing in February in the journal Antiviral Research:

New outbreaks are still ongoing due to complex factors, including difficult control of long borders, frequent exchanges of personnel and products with affected countries, rampant smuggling of pork products, large populations and high densities of domestic pigs and wild boars, high numbers of backyard and small pig farms with poor biosecurity, difficult control of long-distance, trans-region transportation of live pigs and pork products, and the difficulty of early detection of ASF, due to confusion of early clinical signs with other diseases.

So far, there’s no sign that African swine fever has infected pigs or wild hogs in the United States. But the US Department of Agriculture said in May that it would begin testing for the virus to keep the disease out. “The more countries that it’s in, the more risk there is that it can spread globally through travelers carrying processed meat that’s been infected,” said McCracken.

In an email to Vox, Pfeiffer added, “Any pig producing country in the world is at risk, and how high that depends on each country’s border inspection and veterinary service capability and the structure of each country’s pig industry.”

While the outbreak hasn’t significantly affected the price of pork, eventually the massive losses in China and Vietnam may impact consumers around the world.

“Prices are still at acceptable levels because China still has inventories of frozen pork,” says McCracken. “But eventually those inventories will be worked down later this year and prices will move higher. It will be global.”

McDonald’s, which sells a lot of bacon, said it’s already feeling the impact. “African swine fever hurts us a little on the pork,” McDonalds CEO Steve Easterbrook said in a recent interview with CNBC. “That limits the movements of pork and pushes it up here in the US.”