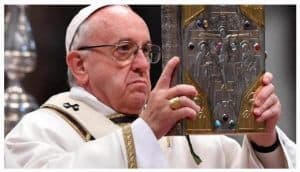 Pope Francis has responded to claims that many of his teachings “contradict Bible teachings” by saying that his words “overrule” anything written in the Bible.

The pope has further angered traditional Christians in recent weeks by developing the habit of hiding the crucifix that is worn around his neck when speaking in public, causing many Christians to believe the pontiff is ashamed to display the powerful Christian symbol.

As reported by NBC News, the Vatican’s Commission for Religious Relations with Jews issued a major new document pronouncing that God had never annulled his covenant with the Jewish people, and so Catholics should not try to convert Jews: “The Church is therefore obliged to view evangelization to Jews, who believe in the one God, in a different manner from that to people of other religions and world views.”

God never annulled his covenant with the Jewish people.

“Go into all the world and preach the gospel to all creation. Whoever believes and is baptized will be saved, but whoever does not believe will be condemned…. After the Lord Jesus had spoken to them, He was taken up into heaven and He sat at the right hand of God. Then the disciples went out and preached everywhere….”

Pope Francis is claiming he knows better than the Gospel of Mark.

Once again, Jorgé Bergoglio pretends to know better than the Gospels, specifically Luke 22, when Jesus in the Last Supper consecrated bread and wine into His body and blood, and said to the apostles:

“This cup that is poured out for you is the new covenant in my Blood, which will be shed for you.”

Jorgé Bergoglio also knows better than St. Paul, who clearly wrote in his letter to the Hebrews 8:13:

“In speaking of a new covenant, He makes the first one obsolete.”

Not only does Jorgé Bergoglio know better than St. Paul and the Gospels of Mark and Luke, he’s also ashamed of the Cross — the symbol of the most important truth of Christianity, which is that the Second Person of the Triune Godhead humbled Himself by becoming incarnate, was grievously tortured, and allowed Himself to be nailed to a cross to die, all in reparation for the sins of humanity, beginning with the first sin of Adam and Eve in that first garden.

A part of every pope’s uniform, including Pope Francis’, is the pectoral cross — a cross that is worn on the chest, suspended from the neck by a cord or chain.

But Pope Francis is so ashamed of our Lord Jesus Christ that he concealed his pectoral cross from Jews by stuffing it into his fascia or waist sash.

On Jan. 16, 2014, Bergoglio concealed the cross when he hosted a delegation of 15 Argentine Jewish leaders at a kosher luncheon in the Vatican (Catholic Family News):

In May 2014, Bergoglio visited Israel, along with Jordan and the West Bank. Here he is on the red carpet at Ben Gurion International Airport near Tel Aviv, with the cross stuffed inside his waist sash. Note, however, that an accompanying cardinal displayed his cross.

On May 26, 2014, Bergoglio paid a courtesy call to the two Chief Rabbis of Israel in the Heichal Shlomo Center, next to the Great Synagogue of Jerusalem. Once again, he concealed the cross by stuffing it inside his waist sash.

Israel Meir Lau, Chief Rabbi of Israel from 1993 to 2003, said that “Crucifixes are an insult to Jews. The cross is against the Jewish religion and the sight of the cross is forbidden for a Jew.”

For that matter, the Talmud teaches that Jesus was a bastard, a fool, a conjurer and a seducer, who was conceived during menstruation (primitive peoples regard menstruation and a woman in menses as unclean), was crucified, buried in hell, and set up as an idol by his followers. (See Rev. I.B. Pranaitis, The Talmud Unmasked: The Secret Rabbinical Teachings Concerning Christians)

Pope Francis really should heed these words of Jesus:

“But he that shall deny me before men, I will also deny him before my Father who is in heaven.” Matthew 10:33

“For he that shall be ashamed of me and of my words…: the Son of man also will be ashamed of him, when he shall come in the glory of his Father with the holy angels.” Mark 8:38

Construction continues on 197 miles of wall the president says will keep out drugs, migrants...