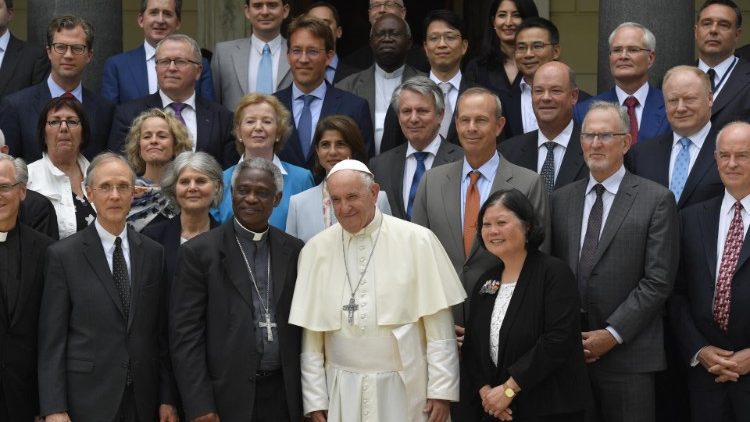 Pope Francis on Friday meets with participants attending a summit entitled, “The Vatican Dialogues: The Energy Transition and Care for our Common Home”. In comments to the group, he warns that today’s ecological crisis, especially climate change, “threatens the very future of the human family” and asks oil CEOs for a “radical energy transition”.

Addressing those attending the summit, which included multinational oil companies, the Pope spoke on an issue very close to his heart: The Care for our Common Home.

Pope Francis told those gathered that this second year of Dialogue in the Vatican was taking place at a “critical moment.”

The Pontiff noted that a significant development in this past year was the release of the Intergovernmental Panel on Climate Change (IPCC) which warns that effects on climate will be catastrophic if the threshold of 1.5ºC outlined in the Paris Agreement goal is crossed. “The Report warns, moreover, that only one decade or so remains in order to achieve this confinement of global warming.”

Faced with a climate emergency, the Pope underlined, “we must take action accordingly, in order to avoid perpetuating a brutal act of injustice towards the poor and future generations.”

In effect, he went on to say, “it is the poor who suffer the worst impacts of the climate crisis.”

What was required, stressed Pope Francis, was courage in responding to “the increasingly desperate cries of the earth and it’s poor”.

During his address, the Pope focused on the three points that were being discussed during the meeting, which are, a just transition; carbon pricing; and transparency in reporting climate risk.

Pope Francis remarked that a just transition to cleaner energy, which is called for in the Preamble to the Paris Agreement, can if managed well, generate new jobs, reduce inequality and improve the quality of life for those affected by climate change.

On the issue of carbon pricing, the Pope said, this was “essential if humanity is to use the resources of creation wisely.”

Speaking on the third point, transparency in reporting climate risk, Pope Francis commented that, “open, transparent, science-based and standardized reporting is in the common interests of all.”

Time is running out

In conclusion, the Pope warned that “time is running out!”

Deliberations, he emphasized, “must go beyond mere exploration of what can be done, and concentrate on what needs to be done.”

In our meeting last year, Pope Francis said, “I expressed the concern that ‘civilization requires energy, but energy use must not destroy civilization’.  Today a radical energy transition is needed to save our common home.”

He continued by saying that, “the climate crisis requires ‘our decisive action, here and now’ and the Church is fully committed to playing her part.”

However, the Pope did strike a note of optimism, “there is still hope and there remains time to avoid the worst impacts of climate change”, he said, “provided there is prompt and resolute action…”

The summit was organized by the Dicastery for Promoting Integral Human Development.