(CNN)Nearly a dozen people are stranded in an area cut off by lava following “vigorous eruptions” from the Kilauea volcano, Hawaii authorities announced Sunday.

Hawaii Civil Defense Service officials said they went through the neighborhood to warn residents this was their last chance to evacuate before their final escape route was cut off by lava.
Some chose to stay in the area, which now has no power, cell reception, landlines or county water, officials said.
Authorities are planning to airlift people out if the lava spreads farther and endangers the dozen or so holdouts. Some said they were staying because they had nowhere else to go, officials said.
Three people were evacuated from an isolated part of the Kapoho community Sunday, according to the Hawaii Fire Department.
The US Geological Survey said in a statement that it “was on a routine overflight and saw people on the road in an area cut off by the lava. They stopped to inquire of their situation, and then when asked, airlifted them to a safe place. They had become trapped after trying to move belongings, and had no cell service.”
USGS said it will not be commenting further on the matter nor providing additional information.
When asked at a press conference Sunday night how many people remain stranded by lava, Hawaii Civil Defense Administrator Talmadge Magno did not provide much more detail, saying “Got reports of seeing people here and there. Yesterday I gave an estimate of about a dozen, probably still at that minus these three.”
Magno reiterated that there’s no power or water in these areas and that those stranded are “off the grid.”
A map shared by the US Geological Survey on Twitter Saturday afternoon showed the lava flow encroaching on the community of Kapoho and MacKenzie State Park. Both are at risk of being cut off as lava flows toward the ocean and blocks potential escape routes. 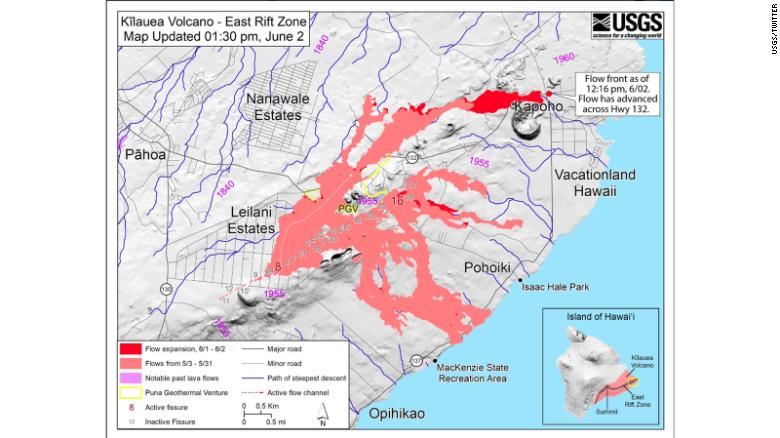 This map shows the lava flow as of Saturday afternoon.
At least 87 homes have been destroyed by the Kilauea volcano eruption in the four weeks since lava began flowing, Hawaii Civil Defense spokesman Talmadge Magno said Friday.
The report of mounting damage followed a mandatory evacuation order issued Thursday night for a portion of the Leilani Estates subdivision in the midst of “vigorous lava eruptions” threatening homes, the Civil Defense said.
The US Geological Survey said the lava from the Kilauea volcano has covered an area of 5.5 square miles — four times as big as New York’s Central Park.
In addition, at over four weeks, this eruption has lasted longer than the 1955 and 1924 eruptions, the USGS said.

Leave — or get arrested

Residents were advised to evacuate by Friday afternoon or get arrested, and emergency responders said they had no plans to rescue anyone from the evacuated areas past the deadline, the agency said.
“They are being asked to leave. Period,” county spokeswoman Janet Snyder told reporters.
Those in Kapoho — including the Kapoho Beach Lots and Vacationland communities — also were ordered out because of the risk of getting trapped by the lava.
Seven people were cited Saturday for loitering in a disaster zone, and they will have to appear in court, Hawaii officials said.
Four weeks have passed since the first eruption rocked Hawaii’s Big Island and lava continues oozing from volcanic fissures, burning homes to the ground and turning into rivers of molten rock.

Besides the lava, there’s also the danger of “vog,” or volcanic smog. Vog is a haze created when sulfur dioxide gas and other volcanic pollutants mix with moisture and dust.
In addition to volcanic particles that can cause eye, skin and respiratory irritation, residents were warned to be on the lookout for sharp, thin strands of volcanic glass fibers known as “Pele’s hair,” a reference to the Hawaiian goddess of fire. The Civil Defense Agency has warned it could cause injury if it gets in residents’ eyes or is inhaled.
There have been 500 quakes in the summit area of Kilauea in the last 24 hours, the highest rate ever measured at the summit area, according to Brian Shiro, supervisory geophysicist at the USCG Hawaiian Volcano Observatory. The largest measured at 3.5 magnitude.