The PM will insist she remains determined to secure legally-binding changes to her deal – despite few signs of progress. 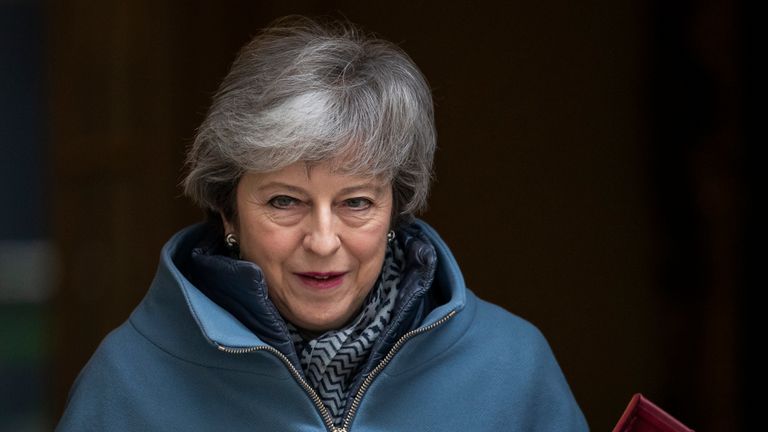 Theresa May will tell the EU it “has to make a choice” on Brexit as she continues a last-ditch effort to win concessions over her withdrawal agreement.

The prime minister will use a speech on Friday to insist she remains determined to secure legally-binding changes to the Brexit backstop.

In a message directed at Brussels, Mrs May will say it is in the interests of the EU to agree to alterations with just days left until the House of Commons votes again on her exit deal.

In a speech in Leave-supporting Grimsby, Lincolnshire, the prime minister is expected to say: “Just as MPs will face a big choice next week, the EU has to make a choice too.

“We are both participants in this process. It is in the European interest for the UK to leave with a deal.

“We are working with them but the decisions that the EU makes over the next few days will have a big impact on the outcome of the vote.”

In January, MPs overwhelming rejected the prime minister’s deal to force her to return to Brussels to seek changes.

Mrs May has focused on altering the Brexit backstop, which the vast majority of Conservative Brexiteers are opposed to in its current form.

The backstop is an insurance policy aimed at avoiding a hard border on the island of Ireland, should this not be averted by a future EU-UK trade relationship.

However, Leave-supporting MPs fear it could leave the UK left in a permanent customs union with the EU and have called for a time limit, an exit mechanism or a complete replacement of the backstop within Mrs May’s Brexit deal.

EU sources suggested to Sky News that Brussels would take a dim view of the prime minister’s speech on Friday, as they stressed their efforts to provide assurances to the UK that the backstop is not intended as a trap.

Despite frequent trips to Brussels by Brexit Secretary Stephen Barclay and Attorney General Geoffrey Cox – as well as diplomatic efforts with EU leaders by Mrs May – there have been signs that discussions have achieved little.

The European Commission described the talks this week as “difficult”, with a spokesman adding: “No solution has been identified at this point.”

Answering questions in the House of Commons on Thursday morning, Mr Cox told MPs the discussions would now “almost certainly” carry on over the weekend.

Mrs May has pledged to hold a second “meaningful” vote on her Brexit deal on Tuesday.

The attorney general also pushed back against suggestions the government has failed to present clear proposals to the EU.

He said: “We are discussing text with the EU.

“I am surprised to hear the comments that have emerged over the last 48 hours the proposals are not clear.

“They are as clear as day and we are continuing to discuss them.”

Mr Cox committed to publishing fresh legal advice on the Brexit deal, should changes be secured.

He joked: “It’s come to be called ‘Cox’s codpiece’ – what I am concerned to ensure is what’s inside the codpiece is in full working order.”

Ahead of the prime minister’s speech on Friday, Labour’s shadow Brexit secretary Sir Keir Starmer said: “It’s becoming increasingly clear that Theresa May will not be able to deliver the changes she promised to her failed Brexit deal.

“This speech looks set to be an admission of failure.

“After two years of negotiation, the government is simply incapable of delivering a Brexit deal that protects jobs, the economy and people’s livelihoods.”