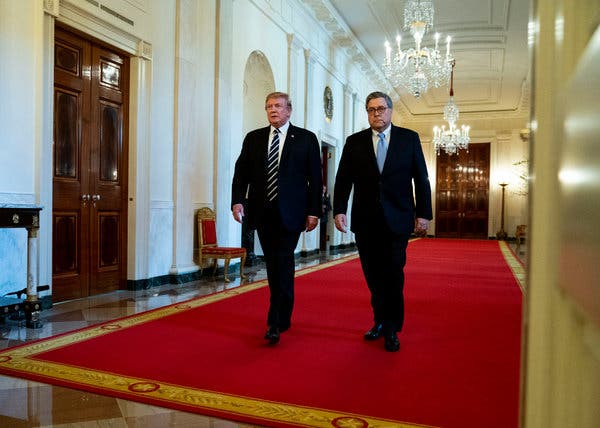 President Trump and Attorney General William P. Barr this week at the White House. The directive gives Mr. Barr immense leverage over the intelligence community and enormous power over what the public learns about the roots of the Russia investigation. Credit Doug Mills/The New York Times

President Trump took extraordinary steps on Thursday to give Attorney General William P. Barr sweeping new authorities to conduct a review into how the 2016 Trump campaign’s ties to Russia were investigated, significantly escalating the administration’s efforts to place those who investigated the campaign under scrutiny.

In a directive, Mr. Trump ordered the C.I.A. and the country’s 15 other intelligence agencies to cooperate with the review and granted Mr. Barr the authority to unilaterally declassify their documents. The move — which occurred just hours after the president again declared that those who led the investigation committed treason — gave Mr. Barr immense leverage over the intelligence community and enormous power over what the public learns about the roots of the Russia investigation.

The order is a change for Mr. Trump, who last year dropped a plan to release documents related to the Russia investigation amid concerns from Justice Department officials who said making them public could damage national security. At the time, the president was being encouraged by a group of Republican Congress members to declassify the information.

Mr. Barr, who has used the word “spying” to describe how the Trump campaign was investigated, has been deeply involved in the department’s review of how intelligence was collected on the campaign. Mr. Barr has told Congress that he personally authorized the review. While he has asked John H. Durham, the United States attorney in Connecticut, to spearhead it, a Justice Department official said that Mr. Barr has personally met with the heads of the intelligence agencies to discuss the review and that the project was a top priority after the release last month of the special counsel’s report.

One official, who spoke on the condition of anonymity to discuss classified matters, said previously that Mr. Barr wanted to know more about what foreign assets the C.I.A. had in Russia in 2016 and what those informants were telling the agency about how President Vladimir V. Putin of Russia sought to meddle in the 2016 election.

The C.I.A. on Thursday referred questions to the Office of the Director of National Intelligence. A spokeswoman for the office did not respond to messages seeking comment.

The directive is likely to irk the intelligence community, which has long prized its ability to determine what information about its operations can be released to the public. During the investigations of the C.I.A.’s enhanced interrogation programs, the agency stymied investigators by refusing to declassify documents.

There could be other implications for the intelligence agencies. The C.I.A. considers confidential sources its most highly classified and most protected assets, and any investigation that could possibly force it to reveal those identities is likely to create a standoff. Last year, the agency lost trust in the Justice Department’s ability to keep the names of informants and sources secret after the identity of an F.B.I. informant who interacted with two Trump campaign officials under investigation, Stefan Halper, was revealed as part of congressional inquiries, according to former intelligence officials.

Late Thursday, Jeremy Bash, a chief of staff at the C.I.A. under President Barack Obama, said that the president’s move was “a very significant delegation of power to an attorney general who has shown he’s willing to do Donald Trump’s political bidding.”

“It’s dangerous,” he continued, “because the power to declassify is also the power to selectively declassify, and selective declassification is one of the ways the Trump White House can spin a narrative about the origins of the Russia investigation to their point of view.”

He added that confidential sources around the globe might be fearful of talking now.

“It sends a signal that their identity may be exposed for purely political purposes,” Mr. Bash said. “If I were in charge of intelligence operations, I would be worried about sources clamming up tonight.”

Mr. Barr has said that he believes Mr. Trump’s campaign was “spied” on, appearing to bolster unfounded accusations that Mr. Trump has made about the Obama administration illegally wiretapping his associates.

The dual decisions on Thursday were announced in a presidential memorandum, and explained in a statement by the White House press secretary, Sarah Huckabee Sanders.

The directive will “help ensure that all Americans learn the truth about the events that occurred, and the actions that were taken, during the last presidential election and will restore confidence in our public institutions,” the statement said.

Despite the significant step, there are indications there may be little criminality to uncover. Mr. Durham is conducting only a limited review, not a criminal investigation, which suggests Mr. Barr may not have identified enough wrongdoing to open such an inquiry.

Mr. Durham is not the only federal prosecutor who has been examining this issue. For over a year, John W. Huber, the United States attorney in Utah, also examined aspects of the Russia investigation until Mr. Durham subsumed that part of his work. When Mr. Barr’s predecessor, Matthew G. Whitaker, was the acting attorney general, and Mr. Trump repeatedly pressed for him to appoint a second special counsel, Mr. Whitaker told people he considered Mr. Huber to essentially be serving in that role.

A Justice Department official confirmed that Mr. Barr asked the president to issue the memo, which broadens his authority in an inquiry in which he is personally interested. The order also extends to several other parts of the federal government, including the Departments of Defense, Energy and Homeland Security.

Since the report by the special counsel, Robert S. Mueller III, was released, Mr. Trump has repeatedly called the inquiry a “hoax” on Twitter and has expressed frustration and anger over the efforts by the Democrat-controlled House to review aspects of the report.

The White House has recently ratcheted up its messaging about the Russia investigation. On Wednesday, Mr. Trump held a hastily called news conference in the Rose Garden to denounce Democrats. There, on a lectern, hung a sign featuring statistics about the Mueller investigation, and it also said, “No Collusion, No Obstruction.”

Meantime, the official White House Twitter page has featured quotations from the president, including one saying, “The crime was committed on the OTHER SIDE.”

Officials at the F.B.I. have denied that anything improper took place in relation to the Russia inquiry.

But in an interview this month with Fox News, Mr. Barr expressed concern about a lack of answers about its origins.

“I’ve been trying to get answers to the questions, and I’ve found that a lot of the answers have been inadequate and some of the explanations I’ve gotten don’t hang together,” he said.

A version of this article appears in print on May 23, 2019, on Page A22 of the New York edition with the headline: Barr Given Broad Power to Review 2016 Campaign Inquiry. Order Reprints | Today’s Paper | Subscribe