President Trump on Friday signed a more than $2 trillion legislative package to combat the coronavirus pandemic and send economic relief to workers and businesses squeezed by restrictions meant to stop the outbreak’s spread after the House of Representatives overwhelmingly approved the legislation earlier in the day.

“I want to thank Democrats and Republicans for coming together and putting America first,” Trump said during an afternoon Oval Office signing ceremony.

The legislation, approved by voice vote despite 11th-hour drama arising from a GOP lawmaker’s objections, amounts to the costliest stimulus plan in U.S. history. It includes checks for most Americans, boosted unemployment aid, help for small business as well as a massive loan fund for corporations – at a time when unemployment is surging at a record pace, a consequence of businesses closing in compliance with social distancing guidelines.

CORONAVIRUS: WHAT TO KNOW

“This bill is not only a rescue package, it is a commitment…that your government and the people whom you elected to serve will do everything we can to limit the harm and hardship you face, both now and in the foreseeable future,” House GOP Leader Kevin McCarthy, R-Calif., said prior to the vote. “To the American public: If you do your part, I promise we will do ours.”

The approval, while widely anticipated, followed a stretch of uncertainty over whether one congressman — concerned about the stunning cost of the package — might be able to stall the vote.

The House’s passage of the bipartisan #CARESAct sends a clear message: we are all committed to protecting America’s workers and families as our nation confronts this public health crisis. #FamiliesFirst 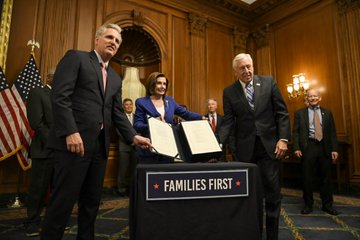 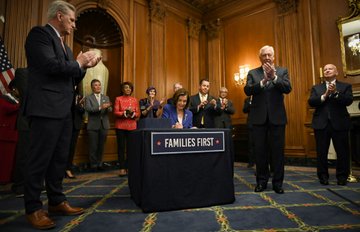 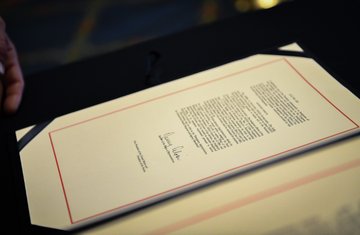 Rep. Thomas Massie, R-Ky., had furiously objected to a simple voice vote that would have required only a minimal number of lawmakers to travel. Massie, as part of his push, wanted to ensure there is a quorum, which would require half of the members to show up on Capitol Hill.

So as President Trump and others accused him of grandstanding, hundreds of lawmakers were summoned to Washington D.C. Thursday night and Friday morning from coronavirus-ravaged communities in New York, California and elsewhere. This, despite strict guidelines from the Capitol physician advising lawmakers not to congregate at the Capitol and to stay in their offices until needed to avoid the spread of the virus that has already infected several lawmakers.

While Massie was able to ensure many lawmakers showed up for the vote, he was not, in the end, able to force a roll-call.

The House, after several hours of debate, ultimately passed the measure by voice vote, and it was allowed to stand.

There were loud cries for ‘ayes’ and few rumblings of ‘nos’ on the House floor.

“The ayes have it,” declared the presiding officer, Rep. Anthony Brown, D-Md.

But Massie stood up and objected. “I came here to make sure our republic doesn’t die by unanimous consent in an empty chamber and I request a recorded vote,” Massie said.

Brown ruled that an insufficient number of lawmakers stood in support of a roll call vote. But Massie pressed on.

“I object on the basis that a quorum is not present,” Massie said, instructing a count of lawmakers.

“A quorum is present and the motion is adopted,” Brown ruled, to applause.

Minutes before the vote, Speaker Nancy Pelosi took to the floor to summon social-distancing lawmakers at the Capitol in an effort to gather quorum and shut down the Massie effort.

Pelosi touted the aid forthcoming for Americans and small businesses while acknowledging that more needs to be done for state and local governments and the frontline healthcare workers. She paid homage to a nurse manager, Kious Kelly, who died from coronavirus after serving at a New York City hospital that had to resort to using plastic garbage bags as gowns.

“We know that this cannot be our final bill,” Pelosi said.

In a series of speeches prior to the historic rescue bill, lawmakers pressed for national unity despite the bill’s imperfections.

“We’re going to help Americans through this,” McCarthy said. “We’re going to do this together and in the end, we are going to be healthier, stronger and more united than ever before, because as Americans, that’s who we are.”

Upon catching wind of the plan to stop a roll-call vote, though, Massie howled on Twitter over the parliamentary machinations.

“It’s pretty clear now, with enough members here to pass the bill, that Pelosi and McCarthy are still working together to block a recorded vote just to insulate members of Congress from ACCOUNTABILITY. Biggest spending bill in the history of mankind, and no recorded vote? #SWAMP,” he tweeted.

After the voice vote, Massie accused Pelosi and McCarthy of trying to shield their members from the political ramifications.

“There’s a big cover-up in there,” Massie said as he exited the Capitol.

Emotions ran hot on the House floor all morning Friday before the vote on the $2 trillion stimulus bill.

She ripped the Senate for fighting for corporate bailouts that will contribute to the income inequality gap in order for families to get “crumbs.”

“What did the Senate majority fight for? One of the largest corporate bailouts with as few strings as possible in American history. Shameful!” Ocasio-Cortez said.

On the other side of the aisle, Rep. Scott Perry, R-Pa., said he’s “distressed by the Hobson’s choice” lawmakers face of having to accept unrelated spending sprees in order to send relief.

“No more billion-dollar bailouts for things that are unrelated. No more policies that are long-standing for a short-standing issue that needs our critical attention,” Perry said.

In a bizarre and seemingly unnecessary point of drama, Rep. Haley Stevens, D-Mich., refused to stop speaking when her time ran out on the House floor, even though Majority Leader Steny Hoyer, D-Md., was willing to let her finish if she had just paused to let him officially grant her more time.

Instead, Stevens continued yelling and held up her hands – clad with pink surgical gloves—in an apparent homage to front line healthcare workers fighting the coronavirus pandemic even though her mic was cut.

As the presiding officer was pounding the gavel and ruling Stevens “out of order,” Stevens screamed, “do not be afraid!”

Republicans, who are trying hard to flip the freshman rep’s seat in November, immediately pounced on the outburst as a “meltdown.”

The bill finances a response with a price tag that equals half the size of the entire $4 trillion-plus annual federal budget. The $2.2 trillion estimate is the White House’s best guess of the spending it contains.

Unemployment insurance would be made far more generous, with $600 per week tacked onto regular state jobless payments through the end of July. States and local governments would receive $150 billion in supplemental funding to help them provide basic and emergency services during the crisis.

The legislation also establishes a $454 billion program for guaranteed, subsidized loans to larger industries in hopes of leveraging up to $4.5 trillion in lending to distressed businesses, states, and municipalities. All would be up to the Treasury Department’s discretion, though businesses controlled by Trump or immediate family members and by members of Congress would be ineligible.

There was also $150 billion devoted to the health care system, including $100 billion for grants to hospitals and other health care providers buckling under the strain of COVID-19 caseloads.

Frustrations were already hot as lawmakers had to return to Washington in a panic after Massie, R-Ky., threatened to upend plans for a simple voice vote with as few lawmakers as possible.

Heading to Washington to vote on pandemic legislation. Because of one Member of Congress refusing to allow emergency action entire Congress must be called back to vote in House. Risk of infection and risk of legislation being delayed. Disgraceful. Irresponsible.

“To you who oppose this bill: Please, please stand down,” Rep. Fred Upton, R-Mich., pleaded on the House floor.  “We can’t wait another day to help. Don’t add to this disruption by, in fact, being a disruptor. Be a leader.”

Lawmakers spoke passionately about how COVID-19 is hurting the health of their communities and how the widespread shutdown of the economy is crippling families and businesses. Yet many openly grappled with voting in favor of bill they believe will be helpful, while it’s chock-full of other provisions that they disagree with.

“This is ripping my heart out because there’s things in this bill that just don’t belong there. I consider them–,” Rep. David Schweikert, R-Ariz., said, stopping himself midsentence. “Well, I can’t say that word in front of a microphone.”

Schweikert, however, argued Congress must “do the right thing” by passing the legislation.

However, Rep. Ken Buck, R-Colo., said he opposed the legislation over cost and debt concerns.

“As President Trump said, we cannot let the cure be worse than the problem itself,” Buck said.