As David Friedman hails their ‘fervor and devotion’ in NY Times interview, his counterpart Ron Dermer calls devout Christians the ‘backbone’ of US support for Israel. 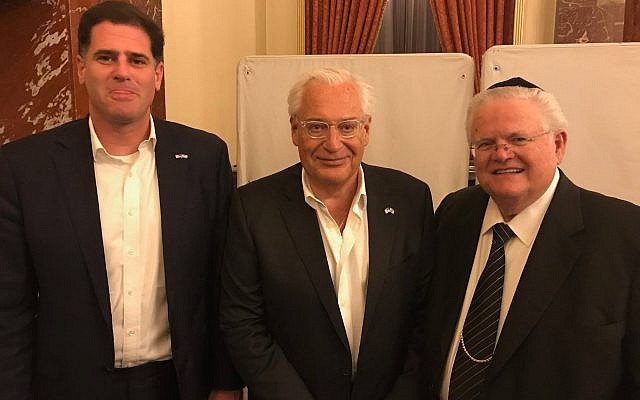 The US Ambassador to Israel said evangelical Christians are more passionate supporters of Israel than many Jews.

Speaking to the New York Times about the prominent involvement of Christian supporters of Israel at the Monday inauguration of the US Embassy in Jerusalem, over which he presided, Friedman said evangelical Christians “support Israel with much greater fervor and devotion than many in the Jewish community.”

He backed Israeli Prime Minister Benjamin Netanyahu’s alliances with leaders of the evangelical community by stressing, “You’re running a country, you need friends, you need alliances, you need to protect your people.”

Friedman acknowledged that he personally invited John Hagee, who gave the closing benediction at the event, and pastor Robert Jeffress, who gave the opening address.

In the article published Saturday, Friedman called them “two of the most followed leaders of the evangelical community,” and said he “wanted to honor the community for having been so constructive in helping to move this along.”

In his address Monday, Jeffress praised “the tremendous leadership of our great president, Donald J. Trump,” and also invoked the “prince of peace, Jesus our lord.”

A Southern Baptist who vigorously supported Trump during the final months of the 2016 presidential campaign and was a member of his evangelical advisory board, Jeffress once warned that Jewish people are going to hell and said Hitler was part of God’s plan to return Jews to Israel. Criticism of his selection to speak at the ceremony was led by former president candidate Mitt Romney, who called Jeffress a “religious bigot.” 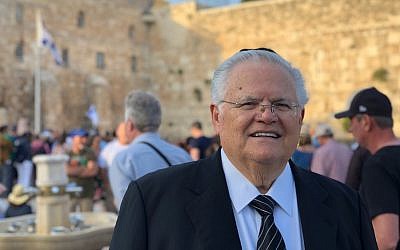 Pastor John Hagee, head of Christians United for Israel, at the Western Wall plaza in Jerusalem’s Old City on May 11, 2018. (courtesy CUFI)

Echoing some of his counterpart’s praise for the evangelical Christian community, Israel’s Ambassador to the United States told the paper that “devout Christians” had become the “backbone” of US support for Israel. “It’s got to be a solid quarter of the population, and that is maybe 10, 15, 20 times the Jewish population,” Dermer said.

He insisted, nonetheless, that the Israeli government was determined to maintain wide, bipartisan US and US Jewish support for Israel. “You could say there’s a shift here or there, but obviously for us, it’s important that we have strong support that’s very broad and bipartisan,” Dermer said. “You can’t fly a plane with one wing.” 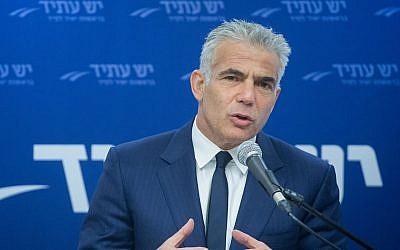 Yair Lapid, head of the Yesh Atid party and a key opposition rival of Netanyahu, warned on Thursday that Netanyahu was “dangerously” aligning his government with conservative, evangelical factions of the Republican Party, and furthering the divide with Democrats.

“The fact that the government completely identifies with the conservative, evangelical faction of the Republican Party is dangerous,” Lapid said.

He added that if there were a Democratic US president and Congress in 2020, it would spell a “serious problem” for Israel if Netanyahu were to remain in power.

The New York Times piece, headlined “Israel and Evangelicals: New US Embassy Signals a Growing Alliance,” said the dedication of the embassy marked “the most public recognition yet of the growing importance the Netanyahu government now assigns to its conservative Christian allies, even if some have been accused of making anti-Semitic statements.”

It said this represented “a historic and strategic shift, relying on the much larger base of evangelical Christians, even at the risk of turning off American Jews who may be troubled by some evangelicals’ denigration of their faith.”

“The paradox is well known,” the paper observed. “The beliefs of many evangelical Christians that Israel is special to God — and, for some, a marker in apocalyptic prophecies — lead many to hawkish support of the Jewish state while they simultaneously insist that salvation awaits only those who accept Jesus as their savior.

As a consequence of the increasingly warm ties between the Israeli right and the Christian right a “polarization” is accelerating — “turning support for Israel into a partisan question in Washington.”