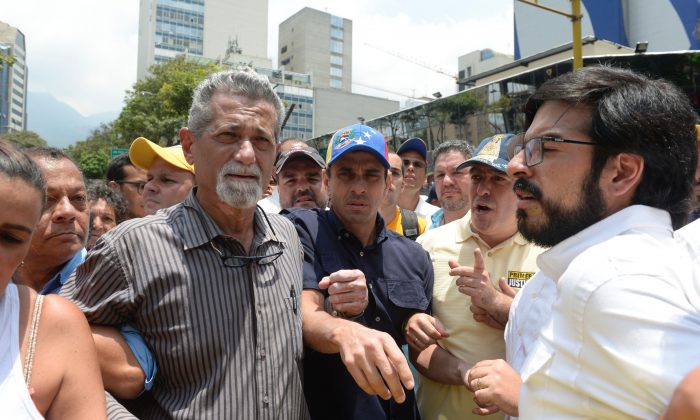 Americo De Grazia (L) and other allies of Juan Guaidó participate in a mass protest against Nicolas Maduro’s regime in Caracas on April 10, 2017. (Federico Parra/AFP/Getty Images)

BOGOTA, Colombia—The regime of Venezuela’s Nicolás Maduro lashed out at the country’s opposition-run congress this week by prosecuting some of its members for supporting new economic sanctions imposed by the United States.

Three opposition lawmakers were charged by the Supreme Court with treason and other crimes earlier. The pro-government legislature, created by Maduro to strip power from the country’s democratic congress, the National Assembly, also announced it would create a commission to evaluate holding 2020 legislative elections earlier, a move that might allow Maduro to reclaim power over the last democratically elected political institution.

Juan Guaidó, the head of congress who invoked the constitution to declare himself interim president on Jan. 23, denounced the move as another attempt to rule through fear and oppression. National Assembly members told The Epoch Times that Maduro’s latest move wouldn’t prevent them from continuing to work toward removing the “narco-dictator” from power.

The announcements followed Washington’s decision to slap the most aggressive sanctions to date on the country on Aug. 5. While excluding the private sector, as well as food, medicine, clothing, and humanitarian aid, the sanctions prevent foreign businesses from dealing with the government and could further decimate an economy already coping with six-digit inflation.

Maduro has promised a “counteroffensive” against those endorsing the sanctions to “bring justice to the sellouts and traitors.”

That “counteroffensive” began Aug. 12 when three lawmakers were charged by the Supreme Court—dominated by judges in Maduro’s party—with treason and conspiracy.

“The dictatorship has become predictable in the only tool it has left: persecution,” Guaidó wrote on Twitter in response to the announcement.

The court has charged 21 deputies with such crimes since 2018.

Deputies interviewed by The Epoch Times said that such measures were expected, and although serious, wouldn’t keep them from continuing their campaign to remove Maduro, who they said is already in his last days in power.

“Venezuela has advanced massively. Today, the only institution that is recognized nationally and internationally is the National Assembly, over which Juan Guaidó presides,” said Americo de Grazia, a member of congress who sought refuge in the Italian embassy in May, when he faced similar charges. “[Maduro’s camp] is already dislocated and has no way out.”

It also was announced by the pro-Maduro legislature on Aug. 12 that a commission would be created to look into holding 2020 legislative elections early.

Maduro’s regime already has invoked a number of measures to make the National Assembly impotent but doesn’t currently control it. In March 2017, the Supreme Court took steps to absorb its functions but abandoned the move as international opposition to the move intensified.

Analysts say Maduro is avoiding moves to dissolve the Assembly as it would likely provoke too strong of a reaction from Guaidó’s allies, such as the United States.

Short of regaining control of the institution, or dissolving it entirely—which risks further retaliation from the United States—there are few options left for Maduro, said Geoff Ramsey, assistant director for Venezuela at the Washington Office on Latin America advocacy group.

“Maduro is running out of cards to play. Either closing the National Assembly or stripping enough of its opposition members of immunity to ensure the opposition lacks quorum will be hugely costly,” Ramsey said, pointing out that the government had already announced the same measures in February, showing the scarcity of remaining options.