Australia has deployed military planes and ships to provide aid as hundreds of wildfires rage across Australia, forcing residents to flee and destroying homes.

The Australian Defense Force is sending ships to the Victoria town of Mallacoota on a two-week supply mission and using helicopters to bring in more firefighters since roads were inaccessible, according to the Associated Press (AP).

On Tuesday, thousands of people from the town on Australia’s southeastern coast fled towards the water as a fire ripped through the area.

This is the situation in Mallacoota at the moment. A mother and her kids are sheltering in their boat on the water. People are reporting the sound of gas bottles exploding in town and quite a few homes have been burnt. @abcmelbourne #gippsnews #gippslandfires 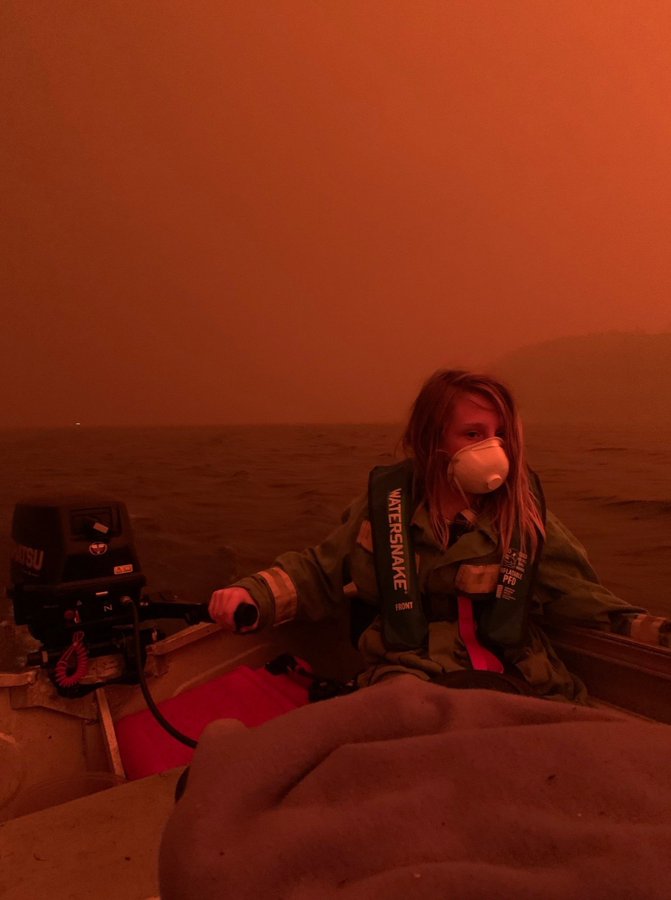 Seven people have died since Monday, with fires tearing through communities in New South Wales and Victoria states, according to the AP. The dead include a volunteer firefighter who was killed near the New South Wales-Victoria border when his truck was flipped over by what local authorities called a “fire tornado.”

In New South Wales, where Sydney is located, firefighters are battling more than 100 fires, according to the state’s Rural Fire Service.

Sydney’s famed New Year’s Eve fireworks went ahead despite the fires. A petition calling on the government to cancel the display and give the funds to firefighters and farmers instead got more than 280,000 signatures.

“We’ve seen extraordinary fire behavior,” he said Tuesday, according to the AP. “What we really need is meaningful rain, and we haven’t got anything in the forecast at the moment that says we’re going to get drought-breaking or fire-quenching rainfall.”

More than 900 homes have been destroyed in the state, according to New South Wales Rural Fire Service.

A fire tracker map maintained by researchers in Western Australia shows that they are also threatening areas around every major city in the country. 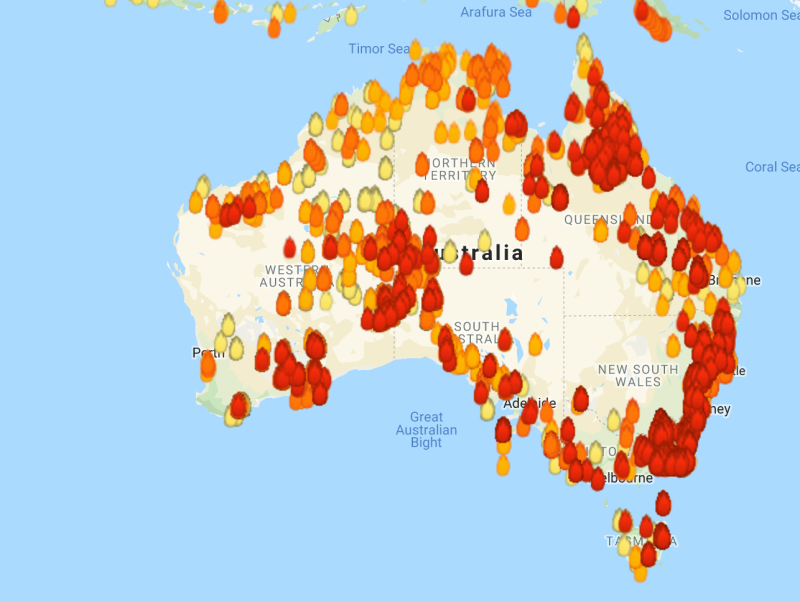 A map from researchers in Western Australia shows hundreds of wildfire hotspots across the nation as of Wednesday, Jan. 1, 2020.

And although the weather cooled slightly in parts of Australia on Wednesday, authorities warned that, with several months of summer left, the worst is not yet over.

“We have three months of hot weather to come. We do have a dynamic and a dangerous fire situation across the state,” Victoria Emergency Commissioner Andrew Crisp said, according to the AP.

Australia experienced its hottest-ever drought conditions in 2019, and the country has experienced record-breaking heat over the past few weeks.

“When you have very hot, dry, windy conditions, if all of those things come together, a fire can get quickly out of control,” Lesley Hughes, with the environmental group Climate Council of Australia, tells TIME.

“As the climate is warming up, we’re getting more and more extremely hot days and currently, of course, Australia is in the grip of probably unprecedented heatwave conditions almost right across the continent.”

Despite the bushfire crisis, Australia’s Prime Minister Scott Morrison has argued that there is no direct link between Australia’s greenhouse gas emissions and the severity of the fires burning across the country. However, he acknowledged that climate change could be impacting bushfires. Australia is one of the highest per-capita emitters of carbon dioxide in the world, according to Climate Analytics, an advocacy group that tracks climate data.

On Wednesday, bushfires burned in all directions outside of Sydney, including a fire near the Blue Mountains which has already destroyed an area larger than the state of Rhode Island. 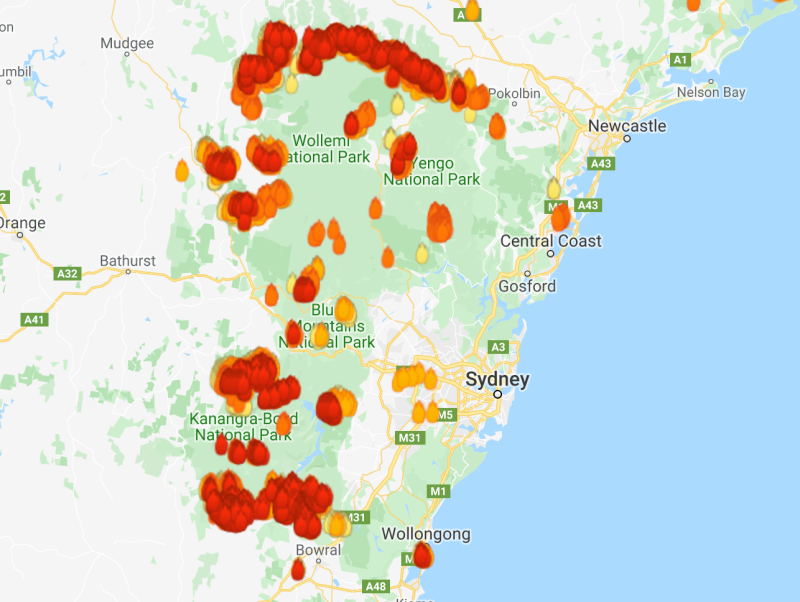 Urgent update for #NewYears revellers Strong #winds are making their way up the #NSW coast & are reaching #Sydney area. Winds are part of the forecast southerly change sweeping the coast & people on or around the harbour should take care http://ow.ly/5P9150xKsfM  @nswpolice #SydNYE 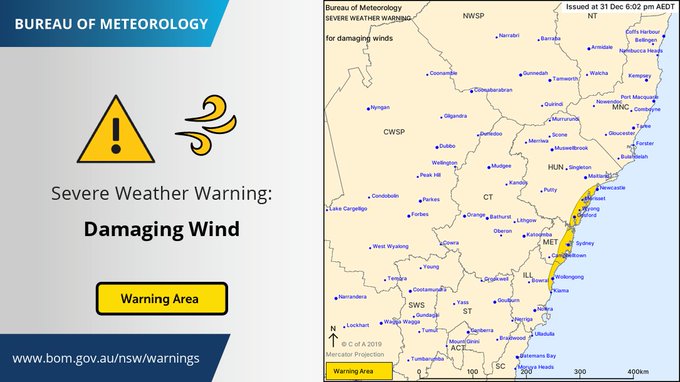 People in Sydney posted photos this week of haze enveloping the city. Haze from the fires was impacting places as far away as New Zealand, according to Australia’s Bureau of Meteorology. 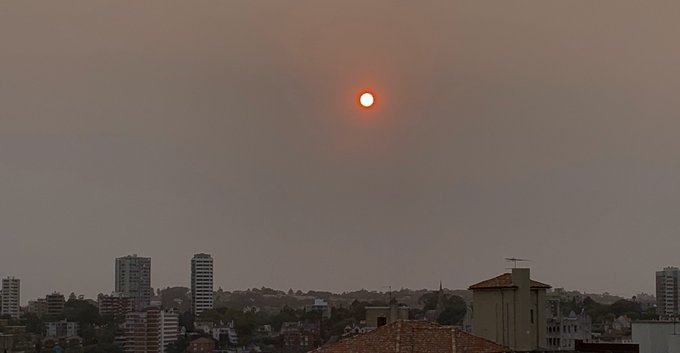 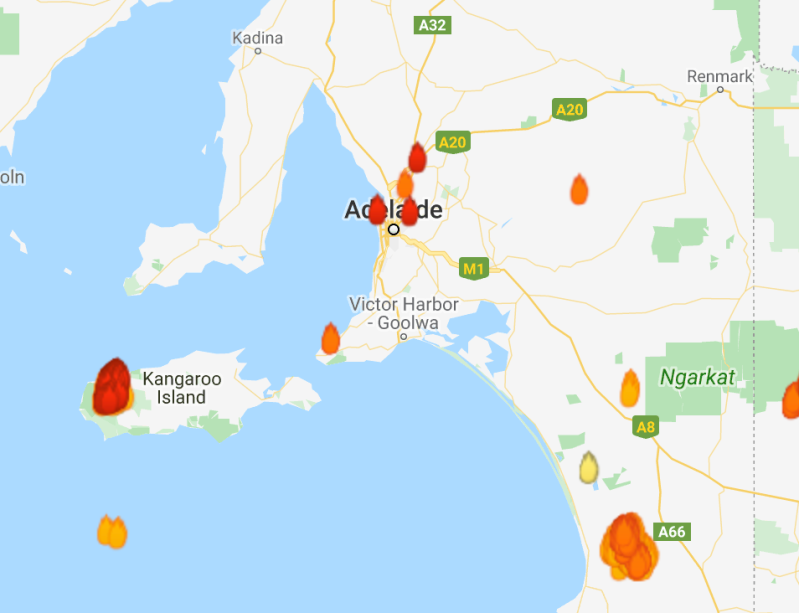 Several wildfires are also burning in the state of Victoria, where Melbourne, Australia’s second-biggest city, is located. 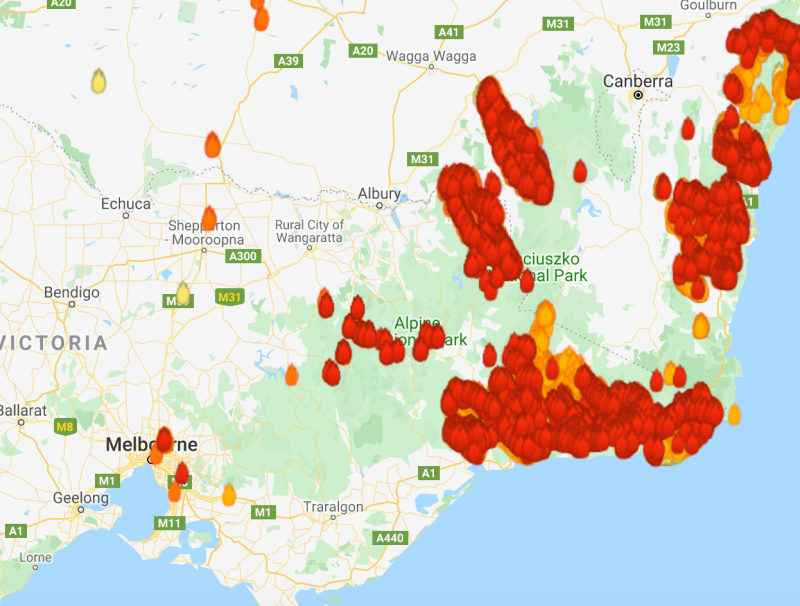 Wildfires burn in the state of Victoria, where Melbourne is located –Landgate’s MyFireWatch

State authorities issued an emergency warning on Wednesday urging some residents of Sunbury, a town about 25 miles northwest of Melbourne, to leave as firefighters battled a blaze.

The Premier of Victoria posted a New Years’ message on Twitter wishing safety to those fighting the fires.

Usually, I’d just be wishing you all a happy New Year – but it’s a tough start to 2020 for lots of Victorians.

So to everyone affected by the bushfires, and to our fireys, emergency workers and volunteers putting their lives on the line: stay safe.

The climate scientist Hughes tells TIME that the widespread wildfire crisis has made climate change a reality for many Australians.

“Certainly this summer, these conditions, the ongoing drought, the heatwave, and the fires, are really bringing home to people that climate change is not some future hypothetical issue,” she says.

Peter Dunn, a former commissioner for the Australian Capital Territory Emergency Services Authority and a member of advocacy group Emergency Leaders for Climate Action tells TIME that the wildfire crisis has “fundamentally shifted” the climate debate in Australia. He and other climate change activists believe Morrison’s position on the country’s greenhouse gas emissions is hindering the government’s ability to tackle the wildfire crisis.

“By not accepting the link between climate change and bushfires as fully as [the government] should, we’re not getting sufficiently prepared to cope with the problem,” Hughes says.

She’s not the only Australian upset over government inaction. Protests broke out at Morrison’s office in December, with demonstrators demanding action on climate change, while others criticized Morrison for taking a vacation to Hawaii during the fire crisis. The Prime Minister cut short his family holiday and apologized for the timing of his trip.

“We’ve had no leadership from the government whatsoever. They’ve been missing in action,” Dunn says.