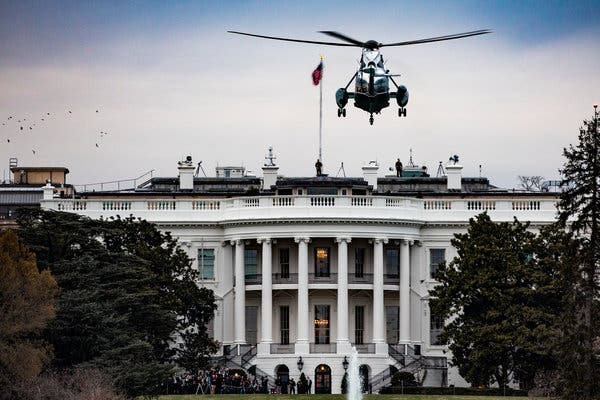 President Trump returned to the White House from his Florida resort after Attorney General William P. Barr delivered a summary of the findings in the Russia investigation. Credit Samuel Corum for The New York Times

WASHINGTON — For President Trump, it may have been the best day of his tenure so far. The darkest, most ominous cloud hanging over his presidency was all but lifted on Sunday with the release of the special counsel’s conclusions, which undercut the threat of impeachment and provided him with a powerful boost for the final 22 months of his term.

There are still other clouds overhead and no one outside the Justice Department has actually read the report by Robert S. Mueller III, the special counsel, which may yet disclose damning information if made public. But the end of the investigation without findings of collusion with Russia fortified the president for the battles to come, including his campaign for re-election.

While critics will still argue about whether Mr. Trump tried to obstruct justice, the president quickly claimed vindication and Republican allies pounced on their Democratic colleagues for what they called an unrelenting partisan campaign against him. Even as his own party’s congressional leaders called on the country to move on, however, the president indicated that he may not be ready to, denouncing the very existence of Mr. Mueller’s investigation as “an illegal take down that failed” and calling for a counter investigation into how it got started.

Emboldened and angry, the president can now proceed with his administration without the distraction of new search warrants and indictments by Mr. Mueller’s team or the worry that the special counsel might charge Mr. Trump’s family members or even uncover a smoking gun that would prove that his campaign collaborated with the Russian government to elect him in 2016. The questions about the Kremlin’s election interference that dogged the president almost everywhere he went may soon fade, even as other investigators continue to look into other allegations.

Mr. Mueller’s team confirmed that Russia did try to tilt the election to Mr. Trump, but its conclusion that he did not conspire with the effort may ease the way for Mr. Trump to reorient American foreign policy toward Moscow and its strongman president, Vladimir V. Putin, without as much concern about domestic consequences. And it may give renewed confidence to Mr. Trump, who has complained that his dealings with world leaders have been hobbled by their uncertainty about whether he would survive the investigation.

The end of Mr. Mueller’s inquiry also left Democrats on the defensive and will force them to decide how vigorously to continue pursuing allegations of misconduct by the president and his allies, including many that were unexamined by the special counsel, whose mandate was limited to Russia’s interference in the election and any possible obstruction of justice resulting from it.

While Mr. Trump claimed that Mr. Mueller’s findings were “a complete and total exoneration,” Mr. Mueller explicitly said they were not. Although he did not establish a conspiracy with Russia, Mr. Mueller made no determination when it came to obstruction of justice. “While this report does not conclude that the president committed a crime, it also does not exonerate him,” he wrote, according to the Justice Department summary sent to Congress.

Instead, according to the summary, Mr. Mueller laid out various actions by Mr. Trump that could be seen as obstruction, letting others decide whether they added up to that. William P. Barr, the attorney general recently appointed by Mr. Trump after drafting a private memo expressing doubt that the president could be accused of obstructing justice for exercising his constitutional power, concluded on Sunday that they did not.

But the House, controlled by Democrats, has the power under the Constitution to decide for itself whether the president’s actions constituted “high crimes and misdemeanors” that justify impeachment, and it could interpret Mr. Mueller’s evidence the other way once it sees it.

The next phase of the story, then, will be the fight by House Democrats to force Mr. Barr to turn over Mr. Mueller’s full report and accompanying evidence, a constitutional battle that could ultimately be resolved in the courts.

Until they read the report for themselves, Democrats are hardly going to agree that the president has been cleared. And they will most likely summon Mr. Mueller to testify, which could provide a public airing of Mr. Trump’s actions that, even if not rising to a crime, may not reflect well on the president.

Still, Speaker Nancy Pelosi has already said that she did not favor impeachment unless the evidence was “so compelling and overwhelming and bipartisan,” a standard that seems even less likely to be met now.

Either way, Mr. Mueller’s investigation has taken its toll on this presidency, leading to indictments, convictions or guilty pleas for a half-dozen of Mr. Trump’s associates, including his campaign chairman and national security adviser, and spawning offshoot investigations. In any other administration, that record alone would be enough to seriously damage a president. 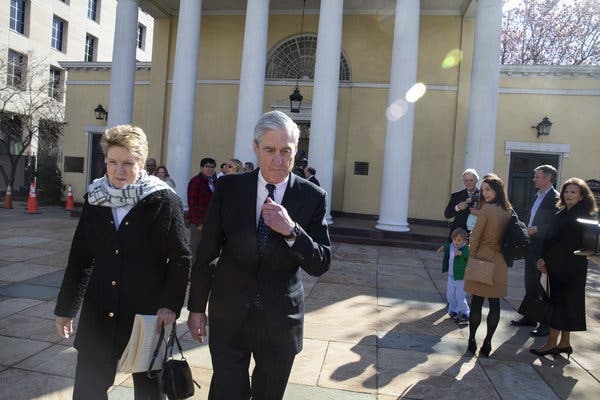 Moreover, as Mr. Mueller closes up shop, federal, state and congressional investigators are still examining Mr. Trump’s business, his finances, his inaugural committee and his associates.

Federal prosecutors in New York have implicated Mr. Trump in a scheme to violate campaign finance laws by directing hush money to two women to keep them from talking before the 2016 election about alleged extramarital affairs with him. The State of New York forced him to close his foundation after finding a “shocking pattern of illegality.” The House Judiciary Committee has sought documents from 81 people or entities associated with Mr. Trump on a wide variety of topics.

But Mr. Mueller had bipartisan stature and credibility that none of the president’s other pursuers have, despite Mr. Trump’s own efforts to tear him down. Now the president who routinely assailed Mr. Mueller and his “13 Angry Democrats” for their “witch hunt” will surely use the results of the special counsel investigation to dismiss all others as part of a pattern of conspiracy mongering and vindictive persecution, whatever the facts may or may not show.

He presumably will not convince his many critics of that, but he may reinforce his political base heading into a re-election battle where Mr. Trump’s ethical and legal issues will surely be a major focus of debate. In polls, core Republican voters have already expressed deep skepticism about the allegations against Mr. Trump and the legitimacy of the investigations into them.

“Not indicted” or “not impeached” may not have been much of a bumper sticker in times past, but in today’s polarized political environment, each side sees these issues through its own lens.

The notion that the system came after Mr. Trump in the form of Mr. Mueller and failed to take him down will fit neatly into the president’s narrative of grievance and victimization, energizing his self-portrayal as a threat to the existing order.

For Mr. Trump, that is as good a day as they come.

A version of this article appears in print on March 24, 2019, on Page A1 of the New York edition with the headline: Burden Lifts, Leaving Trump Fortified for the Battles to Come.