In Mexico’s Matamoros, thousands of asylum seekers wait in an encampment for their asylum cases to be heard in the US.

Matamoros, Mexico – Preparing for lunch hour, Maria* adds firewood to her wide mud stove shaded by a tarp shelter amid hundreds of similar structures home to asylum seekers like her, waiting for months in this camp with hopes to cross the border, just a few paces away, into the United States.

Maria, 38, serves grilled meat, rice, salad, and tortillas for lunch to some of her neighbours encamped on the bank of the Rio Grande in Matamoros, Mexico, just across from Brownsville, Texas.

Dozens of other cooking fires like Maria’s burn throughout the camp all day. Hundreds of mismatched camping tents cluster between the scraggly mesquite trees, picked clean for firewood. Families without tents sleep under plastic tarps hoisted over branches and tied to wooden stakes in the mud. 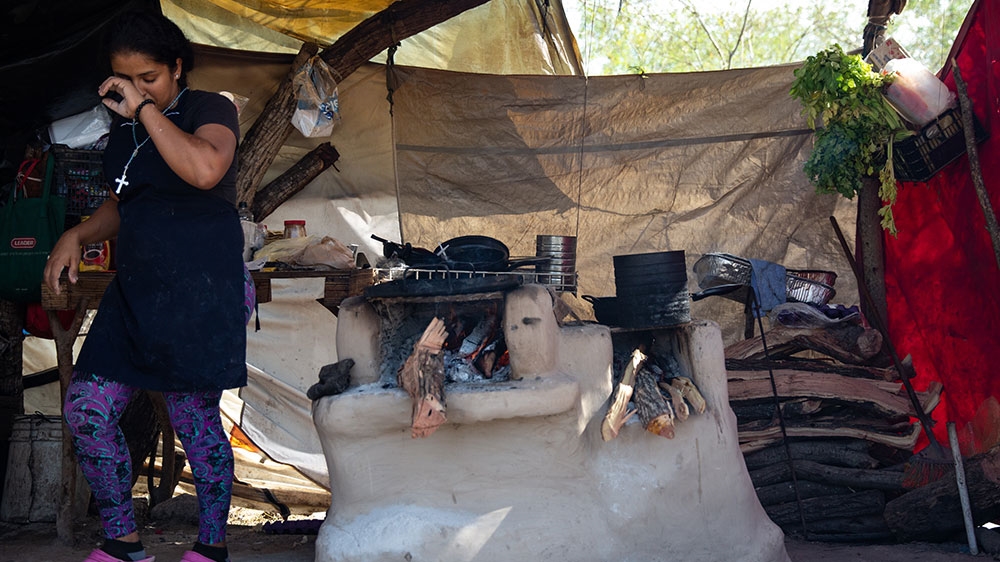 Maria eventually came here from El Salvador with her husband and nine-year-old son, with hopes of filing their asylum claims then moving on to join family in the US like many other Salvadorans who had come before. But when they arrived, the door had been shut.

Now, almost six months later, the American flag waves to Maria from behind a razor-wire fence, just across the river from where she does laundry. At this point, she says, all she can do is to keep waiting with hope.

“We have faith in God that the law will change and they will let all these people in,” Maria says, shielding smoke from her eyes as people stroll along the broad dirt pathway through the tents outside her stall. “That’s why we keep waiting here.”

Her family stays in the encampment with between 2,000 and 3,000 other migrants and asylum seekers, many of whom are waiting for their cases to make their way through the US courts. They are forced to wait in Mexico under the US government’s Migrant Protection Protocols programme, informally known as the “Remain in Mexico” programme. Many often must wait months.

When Maria’s family first arrived, they slept on the street until local churches brought tents and clothing to the growing population of stranded migrants and asylum seekers, most of whom are from Central America and Cuba.

Through a few odd jobs Maria’s family raised the money to start roasting corn for sale, and over the months built their business into the tiny restaurant that also serves eggs for breakfast and beans for dinner. During that time they saw a haphazard clumping of tents grow into the sprawling little shantytown, it is today, supported almost entirely by charity from across the border.

“In a few month’s time an entire village has been created,” says Joyce Hamilton, 69, standing amid a cluster of tents where she and six other self-proclaimed “Angry Tias and Abuelas of Brownsville” stock supplies and staples that they buy for about $7,000 each Monday, shopping at a wholesale store with donated funds. “It’s amazing how much infrastructure has developed.”

But the encampment is not a village at all – at least not in the sense of comfort and permanency. The goal of most of the people here is not to stay forever, but to be allowed to enter the US.

Under four massive awnings raised earlier this year by the Mexican government, a third section of the camp has grown with more orderly rows atop plastic flooring rather than the squiggling paths through brush and often mud in the first two sections.

In January, World Central Kitchen, a nongovernmental organization, opened a large tented dining hall to harbour the efforts already made by local and incoming volunteers to feed everyone each night. Global Response Management, another NGO, offers basic medical services out of a trailer and a few shelters. A local woman runs a thrice-weekly primary school on a sidewalk on evenings here. A large portable filter-and-pump system draws clean water from the river.

Hundreds of families cook dinner on fires each night and wash themselves and their clothes with donated soaps in the nearby river. The Mexican government has supplied a phone-charging station and 50 portable bathrooms, and it plans to lay gravel to control the deep mud that follows the rain here.

This effort has happened without the large organizations that would typically mount responses to refugee crises. Instead, a coalition of grassroots groups has joined up under the guidance of a nearby nun. 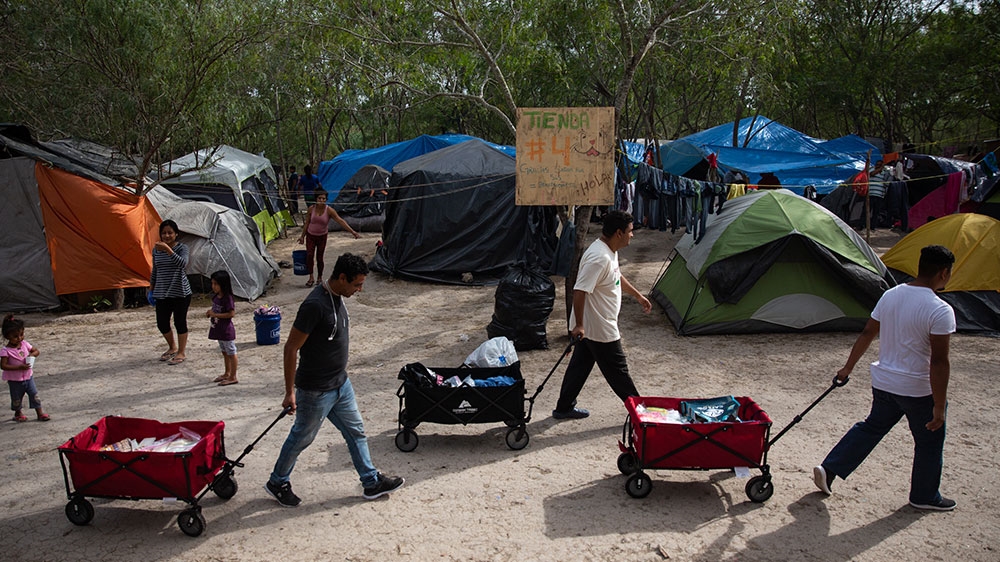 Sister Norma Pimentel, executive director of the Catholic Charities of the Rio Grande Valley, hosts a weekly conference call with 10 to 15 individuals from local charity groups. Each week, she sits down with Mexican government officials and a few volunteer leaders.

“Pretty much anything we ask [the Mexican government] to do when we meet with them, they do,” Pimentel says.

The Mexican government has covered most costs for camp infrastructure, says Miguel Garay, spokesman for the Matamoros city hall. But the encampment has stressed the border city of 500,000, which finds itself obligated to manage the situation.

“International rules say that we have to attend to them,” Garay says. “We can’t kick them out by force.”

He adds that the government had hoped to move the migrant population into a large empty factory near the border, but had abandoned an initially selected location after outcry from local residents. Those residents didn’t want the large displaced population sheltered close to their homes, so the search continues for a more permanent shelter space.

“The idea is to build like a dignity village,” says Sister Pimentel, describing a massive order of rigid shelters and better facilities for hygiene and schooling. But fundraising has fallen short of that massive goal, and summer flooding will force this camp to relocate. Pimentel hopes the government will find a new and appealing shelter for them before that.

“Some of them have been there so long that it will be very hard to move them from where they are,” says Pimentel, who grew up in the local Rio Grande Valley. “But as soon as we get into hurricane season, we’re going to see the river flood.”

Challenge with getting legal counsel

The shelter, Pimental says, is a temporary solution. The most urgent objective, she says, however, is finding lawyers to represent the asylum seekers so they could move into the US.

Erin Thorn Vela, a lawyer who works in the camp with the Texas Civil Rights Project, says that although many lawyers have turned up to offer volunteer services, less than one percent of asylum seekers in Matamoros have legal counsel to guide them through the process.

“What we see is an incredibly low success rate,” she says, citing compiled records requests and regular interviews that have been conducted outside nearby tents due to the absence of public information. “There’s no hard data we can access.”

Lawyers estimate that about one percent of asylum claims are being approved from the Matamoros camp.

Without lawyers, the migrants and asylum seekers are left to navigate the asylum process for themselves, appearing via video conference before US immigration judges from new tented court facilities built on the northern bank of the Rio Grande. 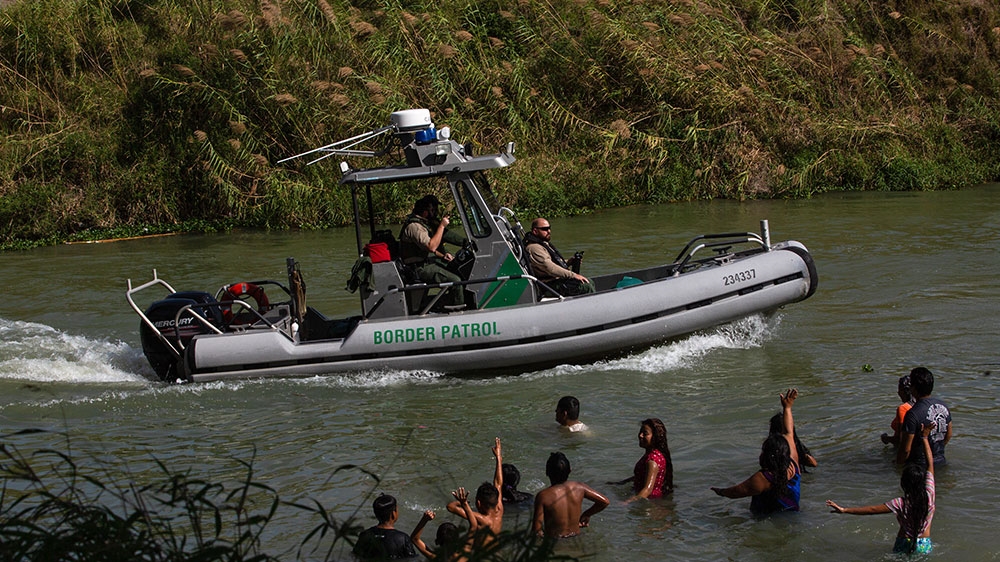 One asylum seeker, a 30-year-old Cuban woman, says she paid a local restaurant owner $40 to explain to her how to assemble an asylum case, and she carried a file full of flawed English translations.

“God is my lawyer,” says another 42-year-old woman from Belize at the camp.

Maria, patting tortillas in her tarp-shelter restaurant in the camp, explains that she still doesn’t understand the asylum process. She has been to the tent courts twice, once on September 12 and again on October 28.

Both times, she says, she was led with a long line of people to appear before a judge speaking on a TV screen through a Spanish interpreter for about 15 minutes. She still hadn’t been asked to explain her case.

“The judge tells us the best thing would be to get a lawyer,” she says, “but obviously here we are in no condition to pay a lawyer.” 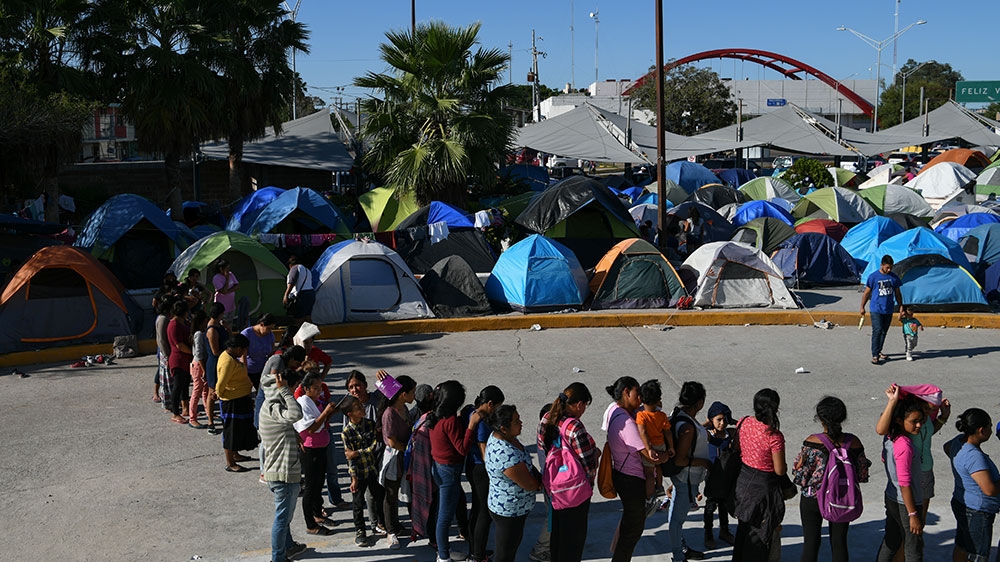 Migrants – most of them asylum seekers sent back to Mexico from the US under the Remain in Mexico programme, officially named the Migrant Protection Protocols (MPP) programme – wait in line for a meal outside the human repatriation office in Matamoros, Tamaulipas, Mexico [File: Loren Elliott/Reuters]

Her troubles, she says, started about a year ago when her husband, who drove a truck, was kidnapped while driving. His truck was stolen and his family paid a ransom to release him. Despite warnings from his kidnappers, he reported the crime to local police.

Some weeks later, gang members showed up at the shoe store that Maria had owned for 15 years, demanded $20,000 and threatened to kill the entire family if she didn’t pay.

Maria and her husband put their parents in hiding, and two days later left the country with their son, traveling by bus through Mexico for a week before arriving at the border in the same clothes they’d worn when they left home.

Everyone here is here because we can’t return home.

Maria and her family thought they could just walk into the US as immigrants had done before new rules this year required that they wait across the border. They slept in the streets of Matamoros before a local church gave them a tent. They started selling fire-roasted corn, then expanded their business with pots and pans and a tall mud oven to make and sell full meals.

Maria’s next court date is set for this week. She isn’t sure if she’ll be granted admission northward, but word around the camp is that the chances are not good.

“Everyone here is here because we can’t return home,” she says, wafting smoke from her cooking fire away from her face. “All the sacrifice that these people have made in the end isn’t worth anything.”

If her family’s asylum isn’t granted, Maria says, she’ll use some money she’s saved from her business to pay smugglers to take them over the river anyway.

*Name has been changed to protect the individual’s identity.