Austrian Jews are worried Israel may warm up to the country’s far-right Freedom Party, a prominent local community leader said this week.

In unusually harsh remarks, Ariel Muzicant, the honorary president of the Austrian Jewish community, accused Jerusalem of “pulling the rug out from under our feet,” and vowed to speak out against the Israeli government if it were to normalize ties with the controversial party.

“European Jews are living in Europe after the Holocaust based on the mutual understanding that we will a) not forget the Holocaust, and b) fight Nazis and anti-Semites,” Muzicant told The Times of Israel on Wednesday.

“So if you start accepting people who on one hand want to be very friendly to Israel, but on the other hand still foster Nazi ideologies, you’re pulling the rug out from under our feet. I am saying to these people, ‘Learn about history, look at the facts, and see there is no possibility for Jewish people to push away what is going on in Europe today, which is a clear anti-Semitic surge.’”

In December, the Freedom Party, known by its German acronym FPOe, became part of Austria’s ruling coalition. Jewish leaders in Austria, Europe, and elsewhere argue that the party has not done enough to distance itself from its past as the political home of neo-Nazis, and still espouses anti-Semitic and xenophobic views. 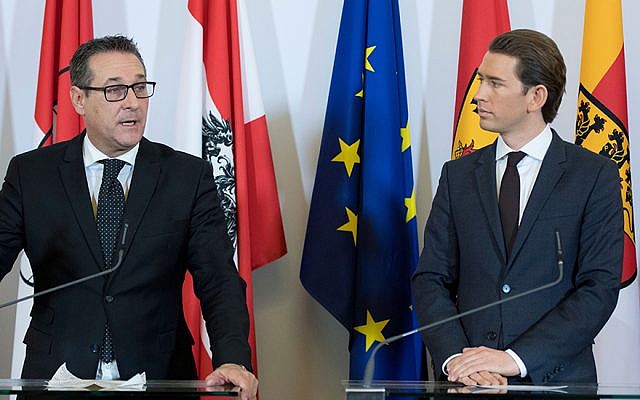 Chancellor Sebastian Kurz, right, of the Austrian People’s Party and Vice Chancellor Heinz-Christian Strache of the Freedom Party give a news conference in Vienna after their first Cabinet meeting, December 19, 2017. (Joe Klamar/AFP/Getty Images via JTA)

At the time, the Israeli government decided “for the time being” to not engage with officials affiliated with the FPOe and to limit contact to “the professional level of the government ministries in which Freedom Party ministers serve,” according to a Foreign Ministry statement.

However, Prime Minister Benjamin Netanyahu ordered a “professional review regarding the manner in which Israel will conduct itself vis-à-vis the new government.”

Austrian Chancellor Sebastian Kurz replied at the time that he respected Israel’s decision but that he was trying to get Israel to lift the boycott on his far-right coalition partners. “It will be our task to do a good job at home as well as to convince abroad,” he said. “I am optimistic that we will dispel all concerns.”

Party leader Heinz-Christian Strache, who was appointed the country’s vice chancellor after the elections, said he was “striving for an honest, sustainable and friendly contact with Israel.”

After a meeting with Netanyahu in Munich last month, Kurz said it was his goal to “normalize ties with Israel in the foreseeable future.”

But Muzicant, who led the Austrian Jewish community for 15 years and also serves as vice president of the European Jewish Congress, said it was not only Kurz’s comments that made him nervous about Israel looking for ways to normalize ties with the FPOe.

Several Israeli politicians — most prominent among them Likud’s minister Ze’ev Elkin and MK Yehudah Glick — have advocated for establishing ties with the FPOe, pointing to the party’s pro-Israel platform and arguing that Israel needs to welcome support from whichever corner it may come.

Glick recently traveled to Vienna and met with Strache. “I am concerned that there are some individuals who don’t want to look at the facts on the ground,” Muzicant said, referring to Glick and other advocates of ties with the FPOe. Israelis arguing that the FPOe is no longer a Nazi party and embraces Jews “just don’t want to realize that no matter what people say they do things differently,” he added.

While FPOe leaders formally reject anti-Semitism, Austrian Jews say the party, at its core, is still infested with Nazi ideology. 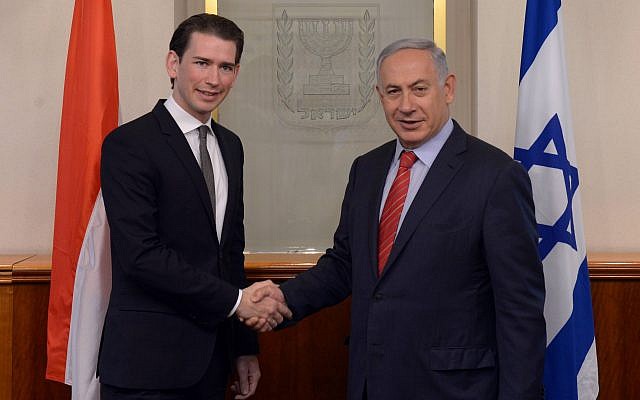 Muzicant, a dual Austrian-Israeli citizen, said Israeli diplomats tell him that the issue is constantly under review, leaving him to fret that Jerusalem may decide at some point to end its boycott of the Freedom Party.

“I am worried that sooner or later Netanyahu will change his policy directive, because it would deprive the Jewish communities of Germany, France, or Austria of their moral position,” he said on the sidelines of the Foreign Ministry’s Global Forum for Combating Anti-Semitism this week in Jerusalem. “Because if the State of Israel undercuts us and our demand to stop neo-Nazi activity in Europe, then we have no more raison d’etre.”

Officially, Israel says that no changes to the status quo are planned. “The Israeli policy is clear and I’m not aware of any change,” Foreign Ministry spokesperson Emmanuel Nahshon said, declining to elaborate.

Seeking the support of Hungary and Poland, Netanyahu has put political considerations over the interests of those countries’ Jewish communities, Muzicant posited, referring to the prime minister’s controversial trip to Budapest last year and his restrained response to a Polish lawcriminalizing discussion of Polish complicity in the Holocaust.

“Jews — especially those in the Diaspora — have values and have had values, and if these values are not worth anything anymore because of realpolitik, they’ll fight. And we’re going to see how it ends,” he said.