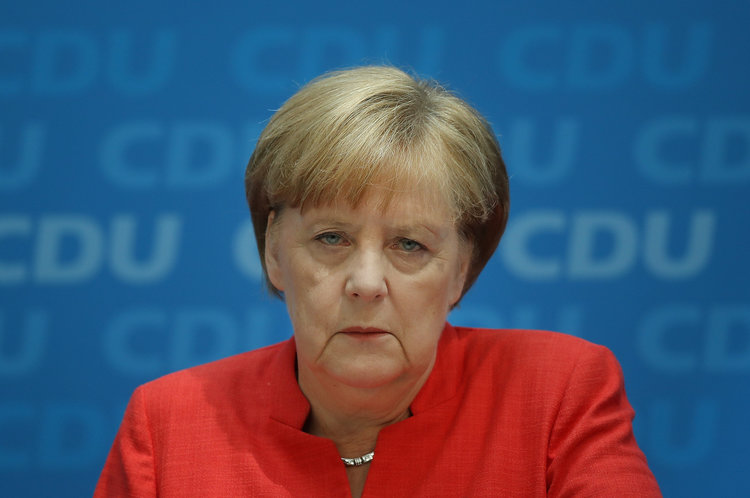 Merkel had a last chance to leave behind a coherent union — she has failed. Sean Gallup/Getty Images

The British politician Enoch Powell famously observed that “all political lives, unless they are cut off in midstream at a happy juncture, end in failure.” German Chancellor Angela Merkel appears to defy this rule.

The present is hardly a happy juncture for her, yet her October 29 announcement that she will step down as leader of her party, the Christian Democratic Union (CDU), has been lauded by observers as both dignified and elegant.

Whether she can continue as chancellor until 2021, as she has said she would, is de facto not in her hands: Were the Social Democratic Party to leave the ruling coalition before then, prompting elections, she would not run again.

Still, she is perceived as supremely in control, just as she has always seemed in control since heading her first government in 2005 — with the fateful exception of the fall of 2015, when many citizens felt that the German state was no longer in charge of its own borders, as hundreds of thousands of refugees streamed into the country.

Conventional wisdom has it that her decision to let in refugees might mar her legacy; in reality, historians might well celebrate her for this moment of courage and compassion.

It is the long-term effects of her reign on German politics and her evident inability to create a lasting architecture for European integration that make a straightforwardly positive assessment of her tenure more doubtful.

Merkel has had an even more profound influence on German politics than the oft-discussed fragmentation of the party system suggests.

As the German political scientist Philip Manow has argued, she was less a chancellor with a strong party behind her than a president, or sometimes even something like a civil servant-in-chief, floating above parties in an era when a succession of crises — starting with the financial crisis — made concentration of power in the executive more legitimate.

SEE ALSO: Germany is taking a step to punish Saudi Arabia that Trump has repeatedly said he won’t go near

Contrary to the cliche that strong political leaders must be charismatic, she often appeared passive or even impersonal. She once suggested to German citizens that they should re-elect her because, “You know me.” In actual fact, most Germans will feel precisely the opposite: They see Merkel as an eminently reliable and highly analytical civil servant, but not as a politician who has ever systematically staked out a vision for the country.

She could govern smoothly, because for most of her time in office, public coffers were full. (Whether Germany’s boom is the result of the harsh labor market and welfare state reforms undertaken by her Social Democratic predecessor Gerhard Schröder remains disputed; what cannot be disputed is Manow’s insight that, unlike previous chancellors, she had to contend much less with the checks and balances built into the German political system, because rising tax revenues made compromises easier.)

Merkel’s sharp policy turns, on nuclear energy and the draft, for instance — which actually outright contradicted the “you know me” claim — could only have been pulled off by someone who was seen as more of a civil servant-in-chief, someone who simply chose the most seemingly reasonable course of action, quite beyond partisan commitments.

In fact, she raided the policies of her competitors, the Social Democrats in particular, thereby systematically demobilizing the party’s voters. At the same time, the decision to abandon nuclear reactors after the Fukushima Daiichi disaster opened the possibility of coalitions with the Green party — thereby increasing the room for strategic maneuver of the CDU.

Merkel could get away with such radical changes partly because she tightly controlled her own party, sidelining potential competitors in a Machiavellian manner. But the other reason was that she convinced many Germans that there was a reasonable center over which she presided, where partisan differences did not matter all that much.

A less polite way of saying this is that Merkel’s default way of governing was something like technocracy. Especially during the euro crisis, she claimed that there was no alternative to her solutions to policy challenges. All who disagreed effectively revealed themselves as irrational — and bad Europeans, as well as, by implication, bad Germans to boot, because the definition of a good German is being enthusiastic about European integration.

As in other countries, technocracy actually paved the way for populism. It is not an accident that the far-right party that was created in response to Merkel’s leadership is called Alternative for Germany (AfD). Populists can (correctly) claim that democracy without choices makes no sense; there is always an alternative, and it is up to voters whether they prefer it or not.

In retrospect, the initial reaction of many centrist politicians to the AfD, then still mostly led by respected conservative professors and businesspeople, was probably a mistake: All criticism of measures to rescue the common European currency was condemned in highly moralizing terms, which arguably contributed to the radicalization of the AfD.

In 2015, the Euroskeptic party still seemed likely to disappear, as many right-wing challengers to the CDU had done in the past. After all, Merkel took a very tough stance on Greece in the summer of that year and thereby satisfied voters who (wrongly) believed that Berlin was giving money to Athens for free.

Yet, soon after, the decision to take in refugees revived — and further radicalized — the AfD, making it what it is today: a radical-right populist party whose only real policy plank is hostility to immigrants and other minorities (and which, alas, is now represented in all German state assemblies, as well as the federal parliament).

It was Merkel’s inability to explain her conduct in 2015 — and the fact that all parties represented in parliament at the time supported her, alongside many in the media — that probably helped to solidify the image on which all populist parties crucially depend: that of an homogeneous elite that is in all likelihood corrupt, but at the very least not acting in the interests of ordinary people.

To this day, many Germans find it hard to understand whether the temporary opening of the borders was a matter of hard-nosed strategy to prevent a collapse of the European Union or humanitarianism. The answer that there was no alternative proved insufficient then and is insufficient today.

Democracy is not just talk, but politics can also never stay silent. Merkel’s pronounced pragmatism — combined with a discourse so noncommittal that it would drive journalists crazy — has contrasted sharply with, for instance, the sometimes sentimental conceptions of Europe put forward by her Christian Democratic predecessors, most notably Helmut Kohl. And Merkel’s aversion to anything like visionary leadership has certainly made it more difficult now to build a proper structure for the EU in the wake of the euro crisis and what is often misleadingly described as the “migrant crisis” — as French President Emmanuel Macron pointed out, migrants weren’t the crisis; it was a crisis of the European political order.

While many Europeans (not least in Brussels) are allergic to talking about the EU as a state in the making, the obvious fact is that at least parts of the union by now have two of the essential attributes of statehood: a common currency and a common border. The challenge after 2015 would have been to make both function properly.

Clearly, Merkel’s attempts to forge a common European approach to refugees became more difficult as an increasing number of politicians, from Hungary’s Viktor Orban to Austria’s Sebastian Kurz and Italy’s Matteo Salvini, discovered that xenophobia could make their political careers.

Still, Merkel had a last chance to leave behind a coherent union when Macron launched his plans for a renewed EU in 2017 and when she was forced into a coalition with the Social Democrats earlier this year.

Rather than simply muddling through in yet another grand coalition, Merkel and her defeated opponent, Martin Schulz (who had spent most of his political life in the European Parliament), could have provided a real rationale for their cooperation by laying out an ambitious plan to remake the EU — which would have justified the two largest parties working together to maximize backing from German society.

None of this has happened, and it is now unlikely to happen, as Macron is losing momentum and even nominal Merkel allies such as Dutch leader Mark Rutte mechanically demand “less Europe.”

Perhaps one day Germans will blame Merkel for not having used excellent economic conditions to dare to do more. They might also wonder whether the creation of an eminently reasonable, technocratic center was not ultimately detrimental for democracy — and if the fragmentation of the party system, while making political life more complicated, was actually also a way to re-establish a sense of democratic choice.

In any case, they will think of Merkel as embodying a fundamental decency — an especially important contrast with certain other leaders today.

In an interview Sunday on CNN’s “State of the Union,” House Speaker Nancy Pelosi said...

An order would signal the seriousness of the coronavirus threat. Texas Gov. Greg Abbott speaks...

In six counties in and around San Francisco, the government has already called for residents...

People of both parties seem rather okay with undermining core civil liberties in order to...

Toilet paper, paper towels and other products seemingly not essential for dealing with the novel coronavirus have...