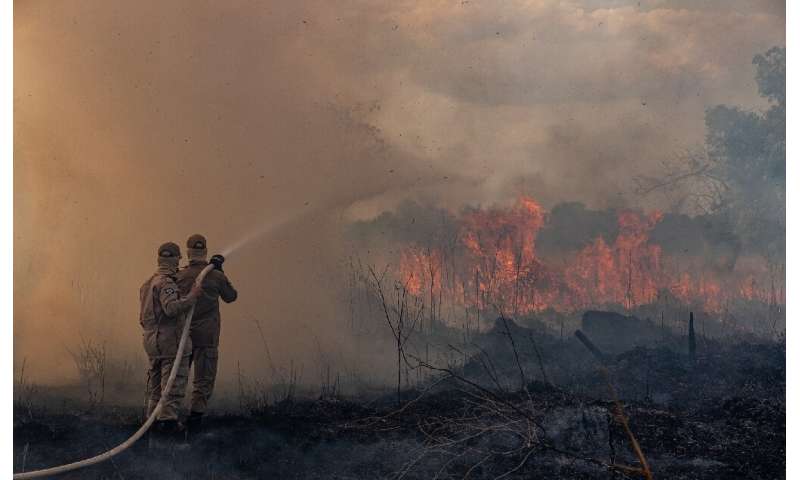 The fires that burned through the Amazon rainforest last month sparked international outcry and offers of help, but as world leaders meet in New York, the planet’s largest rainforest remains engulfed in flames.

The latest satellite data from Brazil’s National Institute for Space Research (INPE) shows 131,600 fires burning since January within the country, where 60 percent of the Amazon lies.

The fires, which are mostly caused by humans with the goal of clearing land for farming and cattle ranching, are having a grievous effect on the forest: the rate of deforestation in the Amazon has nearly doubled since far-right President Jair Bolsonaro came to power on January 1, with the equivalent of 110 football fields of land being cleared every hour.

“It’s sad to see Brazilians attacking me for fires in the Amazon, as if they hadn’t always existed,” Bolsonaro wrote on Facebook Thursday.

We “remain below the average of the last 15 years. But I’m accused of being a Nero, who sets fires everywhere.”

Yet fires are at a seven-year high, according to INPE data, and despite a slight drop at the start of the month, the number of active fires recorded in Brazil from the start of the year to September 19 was up 56 percent over the same period in 2018. Nearly half of the blazes are in the Amazon. 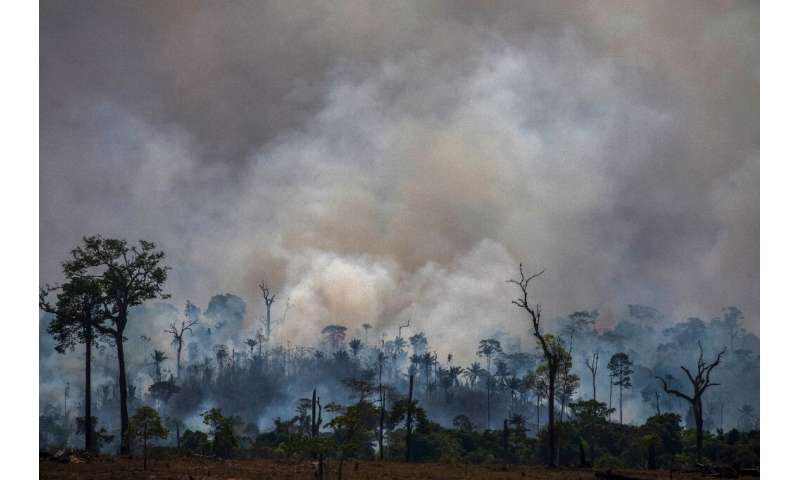 Smokes rise from forest fires in Altamira, in Brazilian the Amazon basin state of Para, in late August 2019

Bolsonaro is a climate change skeptic, but last month he sent soldiers to help put out fires in the Amazon region after Brazil came under criticism at the G7 summit, with the host French President Emmanuel Macron among the most outspoken detractors.

Under that deployment, which was renewed Friday for another month, nearly 7,000 soldiers and 16 aircraft are fighting both the flames and “deforestation and illegal mining,” Brazil’s defense ministry said.

“We did a lot of fly-overs. We did not see anything happening on the ground, apart from the deforestation that is progressing. It’s tragic,” he told AFP.

Experts sent by the United States, logistical equipment from Japan, and four aircraft from Chile are all fighting the blazes, while firefighters sent from Israel have departed, the defense ministry said. 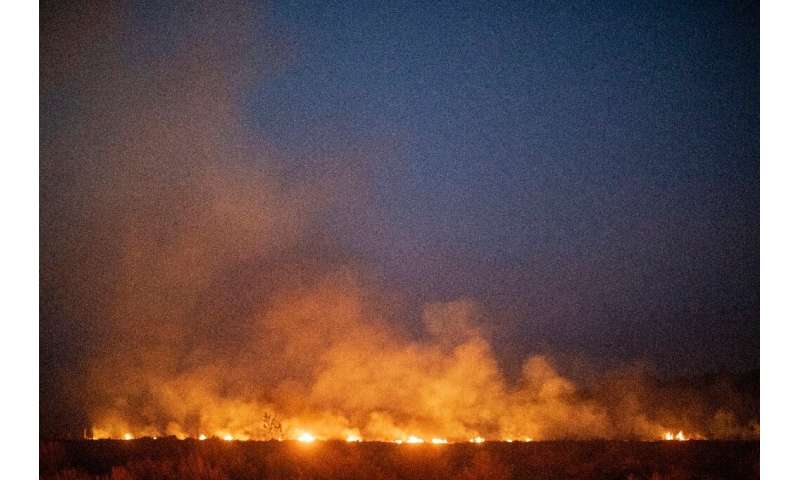 A forest wildfire spreads onto a farm in the municipality of Nova Santa Helena, in Brazil’s Mato Grosso state, in the southern Amazon basin region

Bolsonaro, however, has blanched at other international offers to help put out the fires, rejecting $20 million from the G7 and accusing members France and Germany of “buying” Brazil’s sovereignty.

On Monday, Macron will launch a “call for mobilization” on the Amazon together with his counterparts Sebastian Pinera of Chile and Ivan Duque of Colombia during a meeting on the sidelines of the UN General Assembly in New York.

Brazil won’t attend the meeting, but Environment Minister Ricardo Salles, also a climate change skeptic, will appear at the UN’s climate summit on Monday, before traveling to Europe.

On Tuesday, Bolsonaro will make the opening speech at the UN General Assembly, in which he is expected to focus on the Amazon.

“I am preparing a rather objective speech, unlike my predecessor,” he wrote on Facebook, adding, “I’m going to get hit, you can be sure. The media always finds something to complain about.” 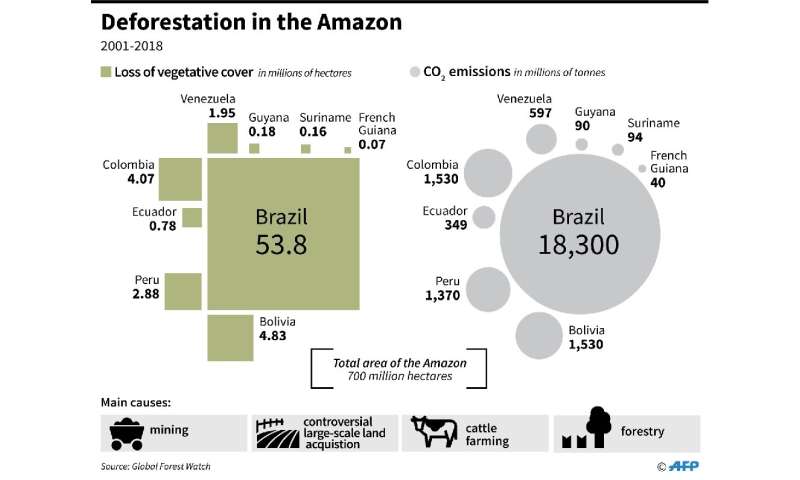 No end in sight

Environmental groups have little faith that Bolsonaro will change tack.

The government “wants to show that it is doing the best for the forest. In fact, it is doing its utmost for deforestation,” said Greenpeace’s Astrini.

“Brazil is running a campaign to show that it is taking care of the Amazon. It’s a lie,” he said.

And there’s little to suggest that the fires are abating.

Between September 18 and 19, the number of forest fires in Rondonia state jumped to 242 from 12 just the day before, an increase of 1,915 percent, according to the INPE. 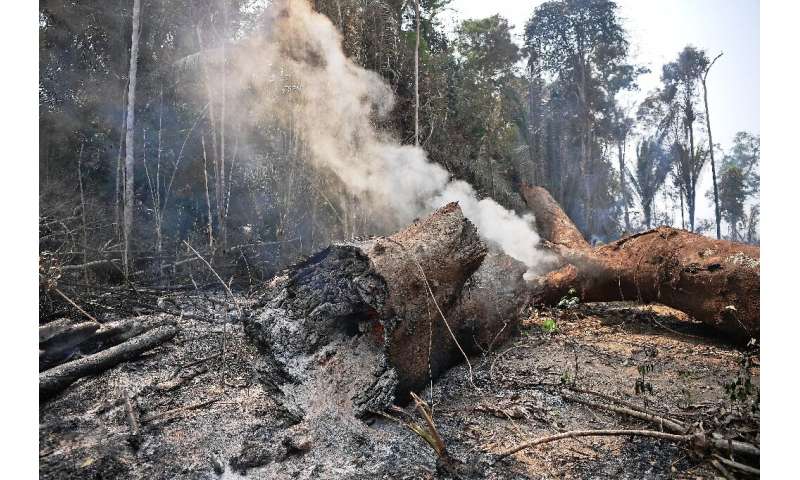 Smoke billows from a burning tree trunk near Porto Velho, in the western-central Brazilian Amazon basin state of Rondonia

Fears are also rising over the number of blazes in the Cerrado savanna, which account for a third of all the fires in Brazil.

And on Friday the World Wide Fund for Nature warned of an “emergency situation in the biome” of the Pantanal wetland.

Fires have risen 351 percent since January in the Pantanal region, some 90 percent of which were set illegally.