On tour in Africa, American officials said the U.S. would keep providing aid. But Congo’s response has been uneven, and the former health minister has been jailed. 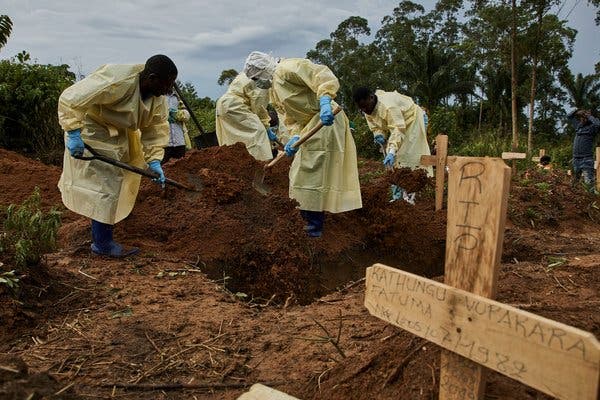 Health workers last month burying an Ebola victim in Beni, the Democratic Republic of Congo. Of about 3,100 Congolese with confirmed infections, almost 2,100 have died.CreditCreditHugh Kinsella Cunningham/EPA, via Shutterstock

The United States remains committed to fighting Ebola in Africa, American health officials said on Monday, but the scope of the current outbreak in the Democratic Republic of Congo has become somewhat unclear.

There were rumors that Ebola had reached Tanzania, the officials noted. And the arrest of Congo’s former health minister, who until recently led his country’s response to the outbreak, has raised doubts about how effective that effort ever was.

The American delegation included Alex M. Azar, the secretary of Health and Human Services; Dr. Robert R. Redfield, the director of the Centers for Disease Control and Prevention; Dr. Anthony Fauci, the director of the National Institute of Allergy and Infectious Diseases; and Tim Ziemer, a retired admiral who is a senior deputy assistant administrator at USAID.

The group toured Ebola response operations in Congo, Rwanda, and Uganda. In a telephone news conference as the trip neared its end, Mr. Azar said that, to date, the United States has spent $158 million in direct aid on the fight and another $238 million in technical assistance, including research on vaccines and treatments.

Of about 3,100 Congolese with confirmed infections, almost 2,100 have died. “It’s a genuine health emergency with significant challenges,” Mr. Azar said.

While the number of new confirmed cases has been dropping for weeks, it is too soon to tell if the intensity of transmission has actually slowed, the World Health Organization reported on Thursday. New hot spots keep appearing, and many victims still die outside of treatment centers with no known connections to previous cases.

Only about 30 percent of patients seek treatment immediately after being infected when the chances of curing them with new antibody infusions is greatest, Dr. Redfield said on the call.

Fewer than 40 percent of the suspected contacts of each known patient are followed and vaccinated. Before officials can conclude that the epidemic is slowing down, Dr. Redfield said, “those numbers need to change.”

Health care workers continue to die of Ebola. Some of them were not vaccinated, which is mystifying since more than 200,000 doses of vaccine have been given out.

The W.H.O. said it had received only $55 million of the $120 million to $140 million that officials estimated would be needed through December to support its role in the response.

Some American government personnel are now working in front-line areas in eastern Congo, Mr. Azar said Monday, but he did not say more precisely where.

In August 2018, after several C.D.C. doctors nearly drove into a gun battle on a rural road, the State Department barred all American government personnel from dangerous areas of Congo, which originally forced the doctors to withdraw to the capital, Kinshasa, about 1,000 miles from the hot zone.

Permission to work in those areas is now granted “on a village-by-village basis after security assessments,” Mr. Azar said. A C.D.C. spokesman later said that 259 agency staff members had been deployed to Kinshasa, Geneva and elsewhere, including the hot zones, but declined to break down that figure further.

On Saturday, Congo’s former health minister, Dr. Oly Ilunga, was arrested and accused of embezzling more than $4 million in Ebola funds, according to an Agence France-Presse report quoting his lawyers and a police spokesman.

Dr. Ilunga resigned in July after the command of the response was taken from him and given to a presidential commission led by Dr. Jean-Jacques Muyembe, a renowned Ebola researcher. In April, Dr. Muyembe oversaw a scathing report on Dr. Ilunga’s efforts, accusing him of arrogance and weak leadership.

Observers said the two men had a frosty relationship, and Congo’s response had been slowed by what appeared to be a power struggle between supporters of the current president, Felix Tshisekedi, and his predecessor, Joseph Kabila. Dr. Ilunga was a holdover from the Kabila administration.

In Tanzania, local news outlets said there had been several suspected Ebola cases. The W.H.O.’s Africa office said last week that it had sent a team to urgently investigate one unexplained death.

On Sunday, Tanzania’s health minister, Ummy Ally Mwalimu, said most reports were unfounded, but the two cases that she considered suspicious had tested negative for Ebola.

Details of the cases were unclear, but news media reports suggested that one or both were doctors who recently visited or worked in Uganda. There are no confirmed Ebola cases in Uganda now.

Mr. Azar called on the government of Tanzania to comply with the W.H.O.’s international health regulations and share samples from the patients so the testing can be confirmed.

Donald G. McNeil Jr. is a science reporter covering epidemics and diseases of the world’s poor. He joined The Times in 1976 and has reported from 60 countries.