‘We are urging people to move to safe grounds. Of course, it’s uncomfortable. But at this time we’d rather they feel funny but safe’. 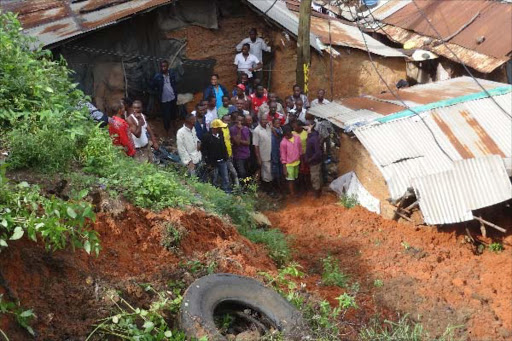 Villagers mill around a house that had collapsed and killing one person on spot over ongoing heavy rains. File

The ongoing rains have killed at least 100 people since last month, authorities have said.

Most of the victims lost their lives in landslides, while others drowned in swollen rivers and flash floods.

On Monday, more bodies were recovered from cold mud in West Pokot where a landslide on Saturday buried parts of Tamkal and Nyarkulian villages.

In a press conference in Nairobi on Monday, Interior Cabinet Secretary Fred Matiang’i said the national government would verify the numbers.

In Kajiado, five members of a family died on Monday morning after their car was swept off as they crossed a flooded Ng’tataek bridge between Namanga and Bissil.

The deaths bring to more than 100 people killed since the short rains began last month.

Earlier this month, the UN Office for Coordination of Humanitarian Affairs, citing figures from the Kenya Red Cross Society, said the rains had killed at least 48 people by November 8.

Matiang’i asked those living in low-lying areas in Murang’a Kiambu, Nyeri and Taita Taveta counties to take precaution because those places were prone to mudslides.

“We are urging people to move to safe grounds. Of course, it’s uncomfortable. But at this time we’d rather they feel funny but safe,” Matiang’i told reporters during a press conference at Wilson Airport.

He was accompanied by Devolution CS Eugene Wamalwa and Inspector General of Police Hilary Mutyambai.

Matiang’i said they were forced to turn back mid-air on their way to West Pokot.

He said they were traveling in two police helicopters but the pilots were advised the weather was too risky.

“We were forced to land in Eldoret. We had left Nairobi at 8 am but in Eldoret we were told it gets even worse in the afternoon. But we will try again tomorrow (Tuesday) morning,” he said.

Matiang’i said the Meteorological Department has warned the ongoing rains will continue until mid-December.

“Because of technology, these warnings are highly reliable and should not be ignored,” the CS said.

Mutyambai said police in North Rift had joined efforts to distribute food and non-food items like blankets and mattresses to victims in West Pokot.

The heavy downpour has been attributed to the unusual warming of the Indian Ocean.

More than one million people have been displaced in Kenya, Somalia, South Sudan, Ethiopia, and Tanzania – but scientists say more misery is coming.

The Indian Ocean dipole, sometimes called the Indian El Niño, is an irregular change in the sea temperature in the western (near Kenya’s coast) and eastern (closer to Australia) areas of the Indian Ocean.

When the ocean around East Africa is far warmer than usual, there is higher evaporation and moist air flowing inwards into East African countries as heavy rains.

Scientists say this year the strength of the dipole is of a magnitude not seen in years, perhaps even decades.