For the third time since the start of Australia’s fire season, a state of emergency has been declared in the Australian state of New South Wales due to fires that are burning out of control. The flames have forced thousands to flee in south-eastern Australia and killed at least 17 people, including three firefighters.

At least eight people have died this week in the New South Wales region and the neighboring state of Victoria, The Associated Press reported.

“More than a quarter of the country is on fire. This state of emergency is rocking Australia to its core,” said Natasha Exelby, a reporter for Network 10, on “CBS This Morning.”

The state of emergency is set to last seven days in anticipation of a potentially catastrophic day on Saturday, according to New South Wales (NSW) Premier Gladys Berejiklian. The premier said the state of emergency will allow for emergency personnel to evacuate people, as well as open and close roads. People evacuating from the region have been facing gridlocked traffic and long lines at gas stations and supermarkets.

Under NSW’s State of Emergency and Rescue Management Act of 1989, the declaration triggers a range of measures and gives the Rural Fire Service commissioner powers to forcibly evacuate people, control over the allocation of government resources, among other powers.

“We don’t take these decisions lightly. But we also want to make sure we’re taking every single precaution to be prepared for what could be a horrible day on Saturday,” Berejiklian said at a press conference announcing the state of emergency.

“There are a lot of tourists on the move, and allowing us to declare the state of emergency… will allow us to ensure that we can provide safe access to roads,” Berejiklian said.

Where are the fires burning?

The fires are primarily raging in New South Wales, which is home to Sydney and more than seven million people.

The nearby Australian state of Victoria in the country’s southeast is also being hit hard. Earlier this week, fires turned day to night in the coastal tourist town of Mallacoota. A siren sounded Tuesday morning, telling about 4,000 people to flee to the town’s waterfront, BBC News reported. By mid-morning, the sky turned pitch black before turning a shade of red. 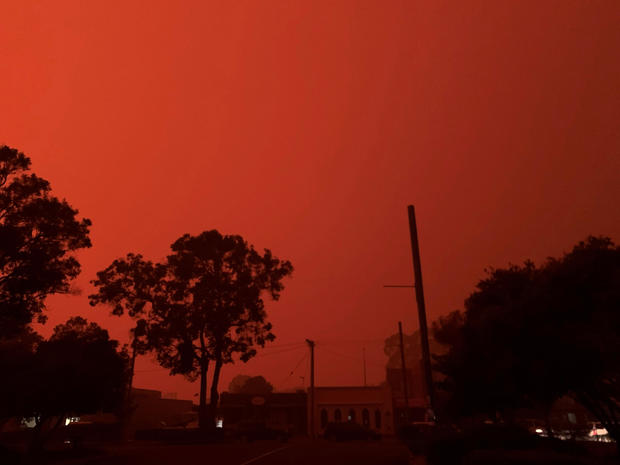 Mass evacuations, being facilitated by the military, began on Friday morning in Victoria. Thousands of people were being taken to a port near Melbourne, about a 17-hour-long journey, according to Network 10 reporter Exelby.

Australian Minister of Defense Linda Reynolds tweeted that defense helicopters are transporting firefighters, performing recon, as wells as search and rescue operations in Mallacoota. The Associated Press reported the military delivered food, water, fuel and medical expertise to Mallacoota, and about 500 people were going to be evacuated from the town by a naval ship.

Why are there fires in Australia?

Bushfires are normally a natural process in Australia. But the combination of drought, record-breaking heat, and strong winds have contributed to the devastating proportions of this year’s fires.

A drought has plagued eastern Australia since early 2017, and rainfall in November was the lowest ever on record, according to the Bureau of Meteorology, the government agency responsible for providing weather services.

According to a December special report produced by the bureau on their 2019 spring (our fall) fire conditions, the season “saw the highest fire weather danger as measured by the Forest Fire Danger Index (FFDI), with record-high values observed in areas of all States and Territories.”

“The dangerous fire weather conditions during spring 2019 is consistent with the increasingly severe fire weather seen in many areas of the country, owing to increasing temperatures and reduced cool season rainfall,” the bureau wrote.

When did the fires start?

Fires began to intensify at the start of Australia’s summer, in September.

“The season began with areas of northeast New South Wales and southeast Queensland having above-average daytime temperatures, very low humidity, and gusty winds leading to dangerous fire weather conditions,” The Bureau of Meteorology wrote in their spring fire report. “FFDI values were 100 or above (catastrophic category) at some locations in New South Wales on 6 September, which marked the onset of numerous large fires in eastern Australia.”

Prime Minister Scott Morrison said at a press conference on New Year’s Day that the fires will last until the rain comes.

“Unlike a flood, where the water will recede, in a fire like this, it goes on. And it will continue to go on — as those in the agencies have advised us — until we can get some decent rain,” Morrison said.

Forecasters predict the fires will get worse in the coming days.

How many acres (hectares) have burnt?

More than 1,400 homes have been destroyed, according to The Associated Press.

Some flames have been reported to reach up to 230 feet (70 meters) in height, according to the fire service. For comparison, the Sydney Opera House is about 213 feet (65 meters) tall.

What is being done to stop the fires?

The NSW Rural Fire Service (RFS), the world’s largest fire service, made up of 74,000 volunteer members, is working to stymie the fires. The federal government has agreed to a plan to provide financial compensation to the firefighters who have volunteered their time, the BBC reported.

Morrison initially rejected the plan, saying it should not lead to permanent pay.

“While I know RFS volunteers don’t seek payment for their service, I don’t want to see volunteers or families unable to pay bills, or struggle financially as a result of the selfless contribution they are making,” Morrison said in announcing his compensation decision, after weeks of criticism by opposition parties. “This is not about paying volunteers. It is about sustaining our volunteer efforts by protecting them from financial loss.”

Emergency Management Minister David Littleproud said at a press conference on New Year’s Day that “everything that humanly possibly can be done, is being done.”

Morrison’s government has faced criticism for its response to the current crisis, and to climate change as a whole. During a visit on Thursday to the coastal village of Cobargo in New South Wales where two people died and many lost their homes, Morrison was berated by locals.

“Every single time this area has a flood or a fire, we get nothing. If we were Sydney, if we were north coast, we would be flooded with donations with urgent emergency relief,” a resident in Cobargo told The Associated Press.

Residents directly criticized the prime minister for the lack of equipment to deal with the fires in town. In at least one incident in New South Wales, a woman refused to shake hands with Morrison. He then grabbed her hand to shake it.

In a separate incident during the same visit, a firefighter also refused to shake Morrison’s hand.

Morrison has urged those who are evacuating to be patient, The Guardian reported. He has defended his climate policies.

“Let me be clear to the Australian people, our emissions reductions policies will both protect our environment and seek to reduce the risk and hazard we are seeing today. At the same time, it will seek to make sure the viability of people’s jobs and livelihoods, all around the country,” Morrison said.

Last month, the prime minister vacationed in Hawaii while the bushfires intensified back home. He cut his trip short after receiving public backlash, The Guardian reported.