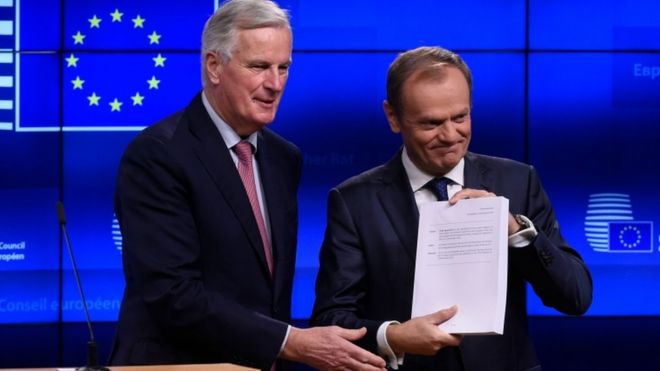 The EU says much work still needs to be done on Brexit, despite agreeing a draft withdrawal document with the UK.

“We still have a long road ahead of us on both sides,” chief negotiator Michel Barnier said.

The EU has set out a series of meetings leading to one on 25 November where it plans to approve the Brexit agreement.

UK Prime Minister Theresa May has won the backing of her cabinet but faces a tough task getting the agreement approved by Parliament.

A sign of that came on Thursday morning when Mr Barnier’s UK counterpart, Brexit Secretary Dominic Raab, resigned saying he could not “in good conscience” support the agreement. He was one of four ministers to quit.

Mrs May later defended the deal in the House of Commons, telling MPs it delivered on the Brexit referendum and provided for an orderly withdrawal.

What has the EU said and what happens next?

Mr Barnier said the agreement was fair and balanced, took into account the UK’s needs and laid the ground for an “ambitious new partnership”.

Mr Tusk praised Mr Barnier’s work and said the agreement had “secured the interests of the 27 member states and EU as a whole”.

He laid out the timetable for the days ahead.

Mr Tusk said: “Since the very beginning, we have had no doubt that Brexit is a lose-lose situation, and that our negotiations are only about damage control.”

Addressing the UK, he added: “As much as I am sad to see you leave, I will do everything to make this farewell the least painful possible, for you and for us.”

Mr Barnier later took the document to the European Parliament. Its president, Antonio Tajani, said MEPs would vote on the deal in early 2019.

If the agreement is approved by both sides, a 21-month transition period will kick in, during which a trade deal and the thorny issue of how to ensure there is no physical border between Northern Ireland – part of the UK – and the Republic of Ireland will need to be worked out.

The document from the EU side

The draft withdrawal agreement covers so-called “divorce” issues as the UK prepares to leave the EU. It includes a “financial settlement” from the UK, thought to be about £39bn (€45bn; $50bn).

Speaking at a press briefing in Brussels on Wednesday, Mr Barnier addressed one of the major concerns of the divorce, the Irish “hard border” issue.

He said that to avoid the need for physical checks on goods or infrastructure at the border between Northern Ireland and the Republic of Ireland, the EU would work with the UK to agree a trade deal. However if talks fail, the so-called “backstop” measure would be used.

Both sides have resolved to ensure the backstop is not necessary by coming up with alternative arrangements.

“If we are not ready by 2020, we can extend the provision so we have more time, and if we are still not there with the future agreement after this, the backstop agreement would kick in,” he said.

The draft withdrawal agreement states that the transition period may be extended by mutual consent.

Mr Barnier said that any extension would by a one-off, “by a limited period and by joint agreement”.

During the transition, the UK will be out of the EU. It will have no voting rights but will continue to abide by the majority of its rules.

There are also special protocols in place for Gibraltar and Cyprus to enable people there “to continue to live as they do today”, Mr Barnier added.

Spain has longstanding claims to the British Overseas Territory of Gibraltar and the deal sets out bilateral co-operation on customs, policing, trade, taxation and citizens’ rights.

The UK has sovereign military bases in Cyprus. EU law will continue to apply at the bases, with the deal securing the rights of the 11,000 Cypriot civilians working there.