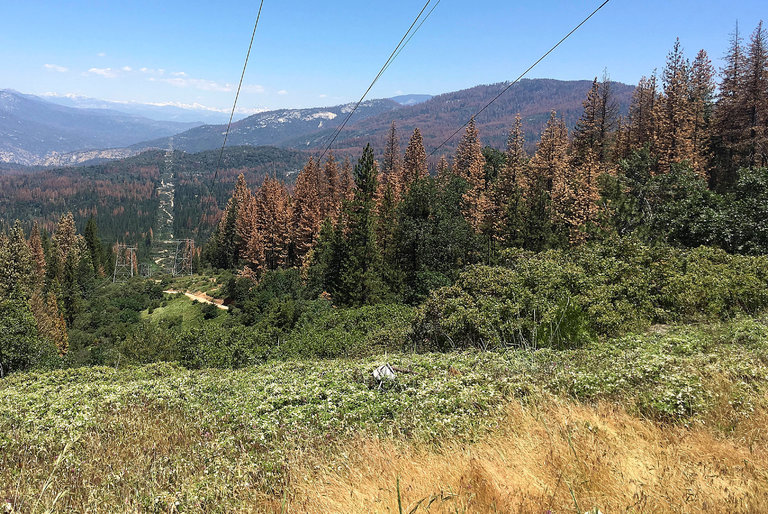 Patches of dead and dying trees near Cressman, Calif., in 2016. CreditScott Smith/Associated Press

(Want to get California Today by email? Here’s the sign-up.)

The more than 100 million trees that died in California after being weakened by drought and insect infestations have transformed large swaths of the Sierra Nevada into browned-out tree cemeteries. In some areas more than 90 percent of trees are dead.

This week a group of scientists warned in the journal BioScience that the dead trees could produce wildfires on a scale and of an intensity that California has never seen.

Coming in the aftermath of the deadly and destructive fires last year both in wine country and Southern California, the warning is sobering because the scientists say they cannot even calculate the damage the dead-tree fires might cause; it exceeds what their current fire behavior modeling can simulate.

“It’s something that is going to be much more severe,” said Scott Stephens, a professor of fire science at Berkeley and the lead author of the study. “You could have higher amounts of embers coming into home areas, starting more fires.”

The authors of the study say the fire risk will ratchet up in the coming years, as the dead trees fall to the forest floor and form a tangled pile of timber resembling something like a giant bonfire.

Why do the researcher say we’ve never seen this before in California?

Mark A. Finney, an expert in fire behavior for the U.S. Forest Service and an author of the study, says California forests are much more vulnerable now because, paradoxically, they have been better protected. In their natural state, forests were regularly thinned by fire but the billions of dollars that the state spends aggressively fighting wildfires and restrictions on logging have allowed forests to accumulate an overload of vegetation.

“We had forests that were very resilient to weather variations and insect disturbances in the past — maintained by frequent fire on the order of every year, or every few years at the most,” Mr. Finney said. By putting out fires, “we’ve changed completely the fire component of these ecosystems,” he said.

How might the dead-tree forests affect California? One of the most striking concerns is the damage the fires might do to watersheds. Intense, hot-burning fires could disrupt forests’ ability to channel water into the Sierra reservoirs that provide cities like San Francisco with drinking water. That’s a scenario that could nudge the state into rethinking its forest management.