(CNN) One week after the Thomas Fire exploded from a brush fire to a raging inferno, thousands of firefighters made some headway Monday in their struggle to contain it.

The blaze is larger than all of New York City and about 20% contained as of Monday evening,according to the fire protection agency CAL FIRE. 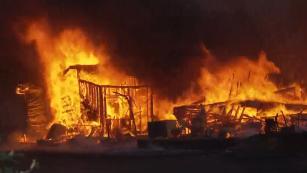 The California wildfires by the numbers

But it’s only one of six major wildfires torching the state, which have destroyed more than 1,000 structures.

As the flames burned in the foothills on the edge of Montecito in Santa Barbara County on Monday evening, some hoped for the best.

Barbara Nimmo said she had lived through massive wildfires, including the Zaca fire that burned more than 240,000 acres in 2007 and one in Romero Canyon more than 40 years ago. She was staying put, she said, even as blaze glowed on the hillside behind her.

7 images show why the Southern California wildfires are so dangerous

“We’re from here. We know fires and we feel absolutely dedicated to our clients,” said Nimmo, an estate manager for several mansions in the affluent Montecito area. “I’m just devastated overall. This is the worst I’ve seen.”

The anesthesiologist, his wife and his son escaped their Santa Rosa home before a wildfire engulfed it in October. 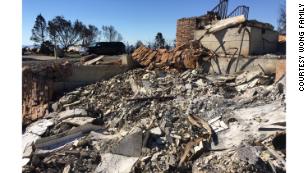 Weeks after Wong sifted through the charred remnants of that house, he learned that his other home in Ventura — which he was renting out to members of the military — burned down last week.

While those tenants are safe, “it was pretty devastating,” Wong said from Santa Rosa on Monday.

“I still haven’t processed the fire down there (in Ventura). I have so much to do to rebuild my house here (that) the thought of trying to rebuild a house down there at the same time is overwhelming. I don’t know what I’m going to do.”

Making history: At more than 230,000 acres in Ventura and Santa Barbara counties, the Thomas Fire is now the fifth largest wildfire in modern California history.

Elevated conditions: Fire conditions are much better than over the weekend, but winds will continue to be a bit breezy at 20 to 40 mph through the middle of the week, according to CNN meteorologist Taylor Ward. Ventura County and surrounding areas are under an elevated fire outlook through Tuesday. Temperatures will remain in the upper 70s and low 80s for the week, as humidity remains low.

Warnings: A “red flag warning” for Los Angeles and Ventura counties has been extended into Wednesday evening, the National Weather Service said. That means elevated fire weather conditions are expected due to gusty winds and low humidity.

Death toll: The death toll from the Thomas Fire stands at one. Authorities believe Virginia Pesola, 70, of Santa Paula, died in a crash while fleeing the fire. Her body was found Wednesday. 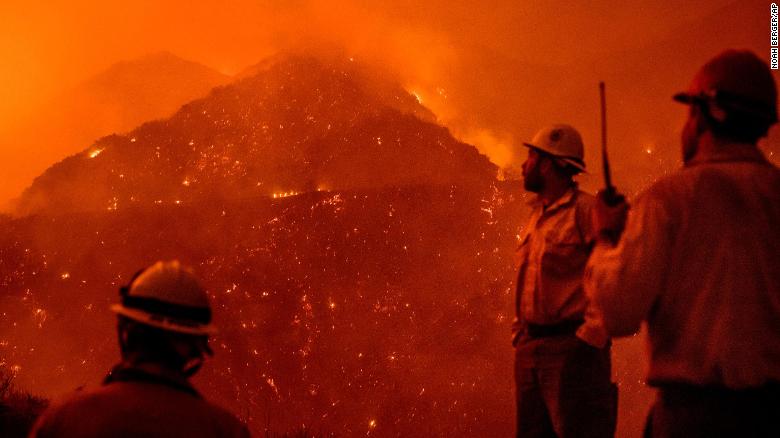 Firefighters monitor the Thomas fire as it burns through Los Padres National Forest.

Thomas Fire: This inferno has destroyed nearly 232,000 acres as of Monday evening and was only about 20% contained Monday afternoon. It started December 4 in Ventura County and has since spread into neighboring Santa Barbara County. The Thomas fire has already destroyed more than 790 structures, according to Cal Fire. The costs of fighting the blaze have topped $34 million.

Rye Fire: This fire broke out Tuesday in Los Angeles County and has torched 6,049 acres. Firefighters are making progress, with 93% of the blaze contained Monday morning.

Lilac Fire: This fast-moving fire has consumed 4,100 acres since it ignited Thursday in San Diego County. Firefighters have regained control of the blaze, and it was 80% contained Monday morning.

Skirball Fire: It started Wednesday as a brush fire in Los Angeles County, north of Brentwood. The Skirball Fire has destroyed 422 acres and was 85% contained Monday morning.

Liberty Fire: This blaze in Riverside County has burned 300 acres since it ignited Thursday. It’s 100% contained, but authorities are monitoring the fire because of a forecasted increase in winds.

Several celebrities with homes in the endangered region thanked firefighters for their brave efforts.

Oprah Winfrey and Ellen DeGeneres, who both have houses in Montecito, an affluent Santa Barbara suburb, tweeted that they were praying for their communities.

“Our house is under threat of being burned. We just had to evacuate our pets. I’m praying for everyone in our community and thankful to all the incredible firefighters,” DeGeneres said. She later tweeted that she was proud to be part of a community where people were helping each other to safety.

Our house is under threat of being burned. We just had to evacuate our pets. I’m praying for everyone in our community and thankful to all the incredible firefighters. The live stream is on http://KEYT.com

Winfrey tweeted that her prayer as the fires raged was “peace be still.”

Oprah Winfrey@oprah
Peace be Still, is my prayer tonight. For all the fires raging thru my community and beyond.

And retired tennis player Jimmy Connors said the Thomas Fire was also threatening his home and tweeted that firefighters were “working tirelessly.”

Firefighters from Arizona, Colorado, Idaho, Oregon, Utah and Washington state have come to California help battle the blazes.
And the Nevada Department of Corrections and Nevada Division of Forestry, which run conservation camps for inmates, have sent six trained crews of minimum-security inmates to fight the Thomas Fire.

Southeast of Montecito, Megan Tingstrom, owner of the Red Kettle Coffee in Summerland, has stayed open most of the week since the Thomas Fire started in Ventura County last Tuesday.

She offered free coffee to the firefighters and evacuees who trickled in.

“Some were crying,” she said of the evacuees. “They said they lost their homes.”

She said residents in Summerland, Montecito, Carpenteria and Santa Barbara are hopeful the blaze doesn’t spread to their communities.