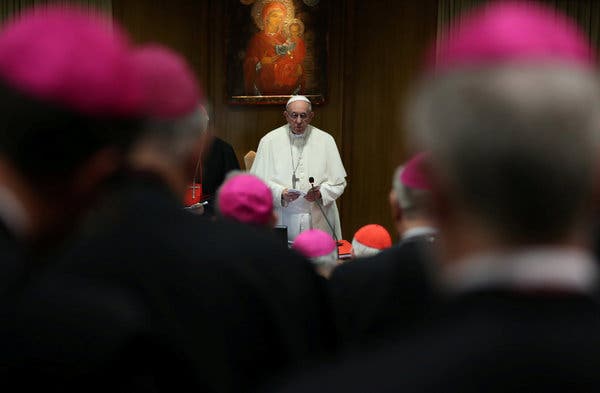 Six weeks after Archbishop Carlo Maria Viganò, the former Vatican ambassador in the United States, shook the church by accusing Pope Francis of covering up sexual abuse, the Vatican broke its public silence on Sunday with a scathing public retort from a powerful prefect for the Congregation for Bishops.

The prefect, Cardinal Marc Ouellet, called the accusations by “dear Viganò” “false,” “far-fetched,” “blasphemous,” “incomprehensible,” “abhorrent” and politically motivated to hurt Francis. He suggested that the archbishop would be wise to “quickly repair” his break with the pope.

“I cannot begin to understand how you let yourself be convinced of this monstrous accusation, which does not stand up,” Cardinal Ouellet said in the letter, which was written in French.

Archbishop Viganò did not immediately return a request for comment on Sunday.

On Aug. 26, conservative Catholic outlets critical of the pope published a long letter by the archbishop accusing Francis of lifting punishments for sexual misconduct for a former American cardinal, Theodore McCarrick, that were reportedly imposed by Pope Benedict XVI.

On Sunday, just a day after the Vatican announced that Francis had ordered a “thorough study” into its archives to investigate the charges, Cardinal Ouellet wrote to Archbishop Viganò that accusing the pope of covering up for this “presumed sexual predator” and judging Francis unfit to lead the church was “incredible and far-fetched.”

“I find it absolutely abhorrent that you have exploited the clamorous scandal of sexual abuse in the United States to inflict an outrageous and undeserved blow against the moral authority of your superior,” Cardinal Ouellet wrote.

He noted that he was responding with the permission of a pope to whom he, unlike Archbishop Viganò, had remained loyal. He seemed to suggest that the archbishop, who has disappeared from view, was in serious danger of severe punishment from the church and called on him to “come out of hiding, repent for your revolt and return to better feelings toward the Holy Father instead of worsening hostility against him.”

Cardinal Ouellet urged him to “quickly repair” the injustice of a “political set up” and, in a deft dig at the ambitious cleric, to overcome the “bitterness and disappointment” that had marked his clerical career.

“You should not finish your priestly life involved in an open and scandalous rebellion that inflicts a very painful wound” on the church, he wrote.

Archbishop Viganò’s initial letter was a remarkable broadside against the Vatican hierarchy. Francis has essentially said he would not dignify the accusations with a response. But Cardinal Ouellet did, and he answered in kind.

Cardinal Ouellet offered personal testimony based on his own interactions and the congregation’s archives. He said that there was no written record of punishment against Archbishop McCarrick, though he acknowledged that the American had been “strongly exhorted” to live a discreet life of prayer, without travel or public appearances, because of the sexual misconduct rumors.

“We come to the facts of the matter,” Cardinal Ouellet wrote to Archbishop Viganò, whom Benedict XVI sent to Washington as the papal envoy in 2011, after his involvement in a scandal in Rome that revealed his frustration at not being made a cardinal.

“How is it possible,” Cardinal Ouellet wrote, that Archbishop McCarrick was promoted to the “high offices of archbishop of Washington and cardinal?”

A professor in a New Jersey seminary sent warnings to the Vatican of the sexual misconduct allegations, in 2000, when Archbishop McCarrick was made archbishop of Washington.

Pope John Paul II, who was accused of allowing sexual abuse to fester in the church, made him a cardinal in 2001. Other accusations have recently surfaced, including from men who say they were abused as young teenagers.

In his letter, Cardinal Ouellet treads carefully on the fact that the American’s ascent took place under John Paul, while making clear that Francis had nothing to do with Archbishop McCarrick’s promotions from New York to New Jersey to Washington.

“Without getting into the details,” he wrote, decisions are made by the popes based on the information available at the time, and the judgments “are not infallible.”

Coming to the defense of John Paul II, who is beloved by Archbishop Viganò and his conservative allies, Cardinal Ouellet, a Canadian, said it seemed unfair to call the decision makers corrupt, even if “some indications supplied by witnesses should have been examined further.”

He said that Archbishop McCarrick showed great ability in defending himself, and, in response to Archbishop Viganò’s ad hominem attacks on Vatican officials for being homosexual or supporting homosexuals within the church, he wrote that “the fact” that in the Vatican there could be people who practice or support sexual behavior “contrary to the values of the gospel” was not reason to generalize and declare “unworthy and complicit” a broad swath of people, “even the Holy Father.”

To do so, he said, was only “slander and defamation.”

He acknowledges that Archbishop McCarrick, who retired in May 2006, was strongly urged “not to travel and not to appear in public, so as not to provoke more hearsay about him,” but he said it was false to present those measures taken against him as punishments decreed by Pope Benedict XVI and then lifted by Francis.

“After a review of the archives, I find that there are no documents signed by either pope in this regard,” Cardinal Oullet wrote.

That seems to undercut the central claim of Archbishop Viganò’s story. He had written in his August letter that he first learned from Cardinal Giovanni-Battista Re, Cardinal Oullet’s predecessor, of the punishment Benedict had imposed on Archbishop McCarrick. He has said his own predecessor in Washington, the late Archbishop Pietro Sambi, received instructions to enforce those measures.

Cardinal Ouellet suggests that the moves were merely precautionary.

“Thus, the Congregation’s decision was inspired by prudence, and the letters from my predecessor and my own letters urged him, first through the Apostolic Nuncio Pietro Sambi and then through you, to lead a life of prayer and penance, for his own good and for the good of the Church.”

The direct accusation by Archbishop Viganò was that he had personally told Francis about Cardinal McCarrick’s sexual misconduct during an audience with many papal emissaries on June 23, 2013.

“I can only imagine the amount of verbal and written information that was provided to the Holy Father on that occasion about so many persons and situations,” Cardinal Ouellet wrote. “I strongly doubt that the Pope had such interest in McCarrick, as you would like us to believe, given the fact that by then he was an 82-year-old Archbishop emeritus who had been without a role for seven years.”

To counter the archbishop’s description of Archbishop McCarrick as the pope’s American confidante and political ally, he writes that he had never heard Pope Francis even mention him.

“Dear Viganò, in response to your unjust and unjustified attack, I can only conclude that the accusation is a political plot that lacks any real basis that could incriminate the Pope and that profoundly harms the communion of the Church.”

A version of this article appears in print on Oct. 7, 2018, on Page A6 of the New York edition with the headline: Cardinal’s Fiery Letter Rips Claims of Abuse Cover-Up. Order Reprints | Today’s Paper | Subscribe

A poster depicting Bjoern Hoecke of Alternative for Germany (AfD) and reading “Never again” is...